American Energy Partners LP (AELP), founded by Aubrey McClendon and privately owned, said Monday it would combine the Utica and Marcellus operations in an all-stock transaction. 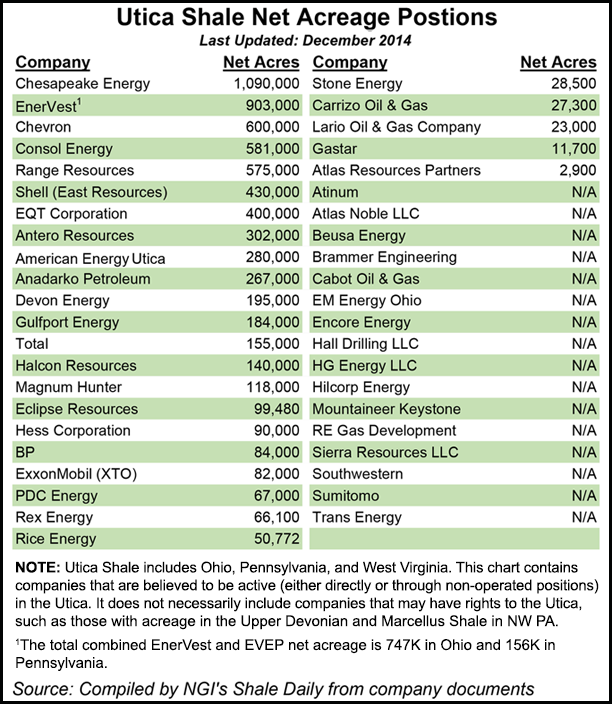 American Energy-Utica LLC (AEU) has concentrated on eastern Ohio and the main focus of American Energy-Marcellus LLC (AEM) has been northern West Virginia.

As a privately held company, no financial details were required to be issued.

AEA would operate more than 300,000 net acres in the Appalachian Basin. According to the company, AEA at the end of September had estimated proved reserves of 1.5 Tcfe, 77% weighted to natural gas. It also was producing 167 MMcfe/d, 79% weighted to gas, at the end of 3Q2014.

Few details about reasons for the merger were provided. The “complementary nature” of the Appalachian exploration and production (E&P) affiliates “will allow AEA to maximize returns by realizing administrative and operational efficiencies and combining downstream marketing efforts and opportunities,” AELP stated.

While AELP said the merger would create “one of the largest pure-play Appalachian E&P companies in the U.S.,” the newly formed company has a long way to go eclipse some of the other independent E&Ps operating in the Marcellus Shale alone.

According to figures tabulated by NGI’s Shale Daily, Range Resources Corp. is the leading Marcellus player with an estimated 1 million net acres, followed by Seneca Resources at 780,000 net. ExxonMobil Corp. may be integrated, but its pure-play exploration unit XTO Energy Inc. has 732,000 net acres in the Marcellus. An exploration unit of Chevron Corp. is developing another 700,000 net in Marcellus, while a unit of Statoil ASA has 665,000 net. Royal Dutch Shell plc’s Marcellus E&P business has close to 600,000 net acres.

Today, Chesapeake is mostly working the Utica, but it still has 408,000 net acres in the Marcellus, a leasehold that McClendon had primarily helped put together.

At least 13 other E&Ps that operate in the Marcellus by itself would be larger than the business created through McClendon’s Appalachia merger.

The merger also comes no where close to measuring up versus other Utica players, with Chesapeake, hand’s down, the leasehold giant in the Utica, with 1.09 million net acres. Its frequent partner EnerVest operates close to 903,000 net acres, while Chevron has around 600,000 net and Consol Energy Inc.’s E&P unit has 581,000 net acres. At least eight companies working in Utica would have more net acreage than the merged McClendon unit.

AELP in June spent more than $4 billion to acquire packages of property in Ohio, Texas and West Virginia in transactions that combined were worth $4.25 billion (see Shale Daily, June 9, 2014). The Utica acquisition at that time was said to mark AEU’s seventh major acquisition, giving it around 280,000 net acres (see Shale Daily, Feb. 20, 2014).

Oklahoma City-based AELP was formed less than two years ago by McClendon following his forced retirement from Chesapeake Energy Corp. (see Shale Daily, April 17, 2013). The focus parallels that of Chesapeake’s, to find and develop U.S. onshore unconventional oil and gas.

Since its formation, AELP has expanded across the onshore and it now operates in five plays. Affiliates include American Energy-Permian Basin LLC, a growing entity that may become a public company this year, depending on market conditions (see Shale Daily, Nov. 24, 2014). American Energy-Woodford LLC and American Energy-NonOp LLC are two other businesses formed by McClendon.