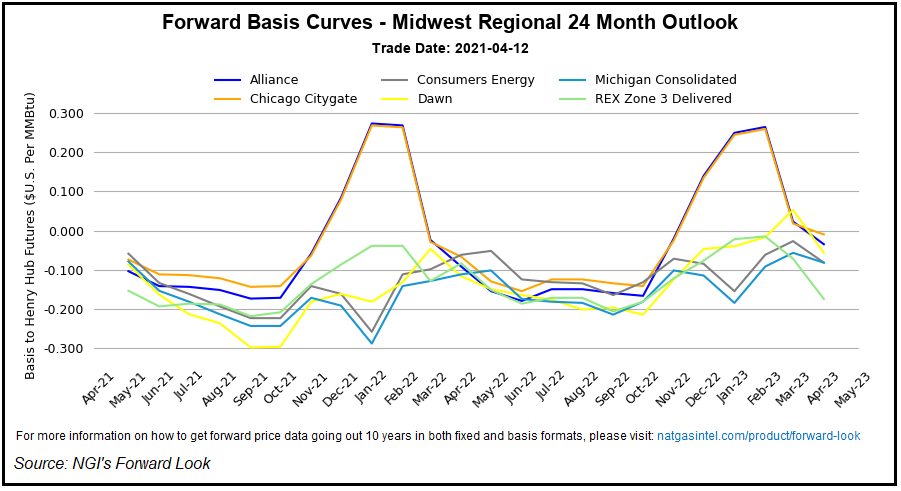 LNG feed gas volumes hovered close to 2021 highs and well above 11 Bcf on Tuesday, NGI data showed, reflecting ongoing demand from both Asia and Europe for U.S. exports of the super-chilled fuel. With stocks low in Europe and the summer cooling season on the horizon, analysts increasingly expect LNG to remain a source of strength throughout the year.

RBN Energy LLC analyst Lindsay Schneider said with demand up and price spreads to global markets favorable for U.S. exports, LNG is likely to remain near the 11 Bcf level throughout the spring and into the summer months, with the exception of maintenance periods.

She said when planned liquefaction trains begin commissioning later this year, U.S. LNG deliveries could ramp up to around 12 Bcf/d. “We’re likely to see total U.S. feed gas demand climb further to about 13.2 Bcf/d — up a whopping 20% from current levels” — next year, Schneider added.

Near-term weather, meanwhile, also held firmly in favor of natural gas prices. Cold air blew into the Midwest Monday and Tuesday and was expected to push east across the Lower 48 over the course of the week, lifting heating needs.

National demand could remain strong for another week as weather systems are expected to bring low temperatures ranging from the 20s to lower 40s over large swaths, NatGasWeather said. Projected temperatures from both the American and European weather models are likely “cold enough to be considered bullish” through April 22, the firm said, before milder conditions return.

“Bulls gained momentum in recent sessions by rallying prices off $2.50” from last week, the firm said, noting both the weather forecasts and LNG demand.

Thursday’s Energy Information Administration (EIA) inventory report could shed more light on supply/demand balances and be the next catalyst for prices.

Early survey results from Bloomberg on Tuesday showed injection expectations for the week ended April 9 ranging from 62 Bcf to 79 Bcf, with a median of 67 Bcf. NGI’s model forecast an injection of 67 Bcf. That would compare with a 68 Bcf build recorded in the year-earlier period.

Energy Aspects issued a preliminary estimate for a 69 Bcf injection.

Longer term, however, Energy Aspects is projecting a “bounce back” for industrial demand and commercial load this year because “vaccination rates are speeding up, and numerous states are undertaking broader reopenings.”

The analysts said as the economy gathers momentum, energy demand is likely to rise alongside business and manufacturing activity.

“Additionally, capacity utilization in refining — the second largest sector for industrial gas use — has risen to 84%, the highest level since March 2020,” the analysts noted.

That noted, and while inoculation programs are gaining momentum globally, health authorities continue to caution that the path to a post-pandemic world could prove bumpy for months. On Tuesday, for example, U.S. officials called for a pause on the use of Johnson & Johnson’s single-dose vaccine, noting that six women had developed blood clots within three weeks of receiving the shots. One of the women had died.

Nearly seven million people in the United States have received the Johnson & Johnson shots, and officials at the U.S. Food and Drug Administration said the “adverse events appear to be extremely rare.” Still, the halt raised concerns on Tuesday about the pace of overall inoculation efforts, adding a wrinkle for markets.

However, observers noted that, overall, vaccination trends are encouraging. “With nearly 20% of the population fully vaccinated and the daily doses administered rising to over three million-plus per day, the potential of getting to herd immunity by the end of July would stave off arguably one of the largest risks” to the economy and markets in 2021, said chief investment officer Larry Adam of Raymond James & Associates Inc.

Next-day cash prices on Tuesday advanced across every region of the Lower 48 as a series of weather systems swept across the country, bringing below-average temperatures and, in some areas, chilly rains and snow.

Lows this week were expected to range from the 20s to 30s in the nation’s midsection, according to National Weather Service (NWS) forecasts.

Below-average temperatures were forecast for much of the eastern half of the country through this week and next, NWS data showed, providing price support. The western and southwestern United States, meanwhile, could see highs from the 70s to 90s by this weekend, galvanizing cooling demand.

As the maintenance season progresses, meanwhile, Rockies Express Pipeline said it would perform planned work that could limit up to 275 MMcf/d of receipts in Ohio on Wednesday and Thursday.

“The work being performed at its Seneca Compressor Station will completely cut receipt capacity at two different locations,” both of which are in Noble County, OH, Wood Mackenzie analyst Anthony Ferrara said. Over the past 30 days, receipts at these two locations combined have averaged 249 MMcf/d and maxed at 275 MMcf/d, he said.