After some early-season heat last month, May natural gas bidweek prices rallied by the double-digits as warmer weather is set to build and threaten to expand storage deficits. The NGI’s May Bidweek National Avg. jumped 30.5 cents to $2.685/MMBtu. 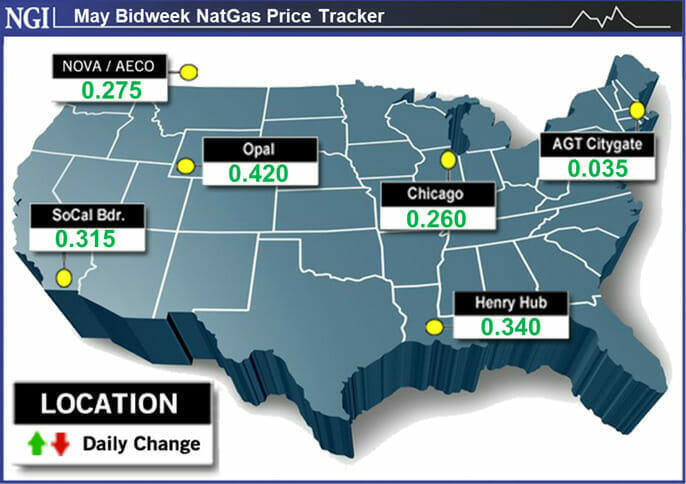 The May 2021 natural gas bidweek average was $1.06 higher than last year’s May bidweek price, which had posted its own sharp increase fueled by the easing of stay-at-home and shutdown mandates amid Covid-19. However, the May 2021 Bidweek National Average fell short of the Nymex May futures contract’s $2.925 expiration, which strengthened for three consecutive days before rolling off the board.

After soaring 32.6 cents (12.5%) in three weeks in the midst of the shoulder season, however, the rally may be due for a near-term pause before robust fundamentals carry higher into early summer, the firm said. It noted that a string of large 95 Bcf/week storage injections are projected during May.

The expectations for plump storage builds in the coming weeks are a stark contrast to the string of light builds so far in the injection season.

Last week, the Energy Information Administration (EIA) reported a 15 Bcf injection for the week ending April 23. Though the figure was higher than what the market had expected, it was far below historical injections for this time of year and subsequently expanded the deficit.

For the upcoming EIA report, early whisper numbers are pointing to a build in the high 60s Bcf to mid-70s Bcf. Although the projected build is much more stout than last week’s, it still would be shy of both last year’s 103 Bcf injection and the 81 Bcf five-year average.

Bespoke Weather Services, which forecast this week’s injection at 69 Bcf, said a build near that level would reflect supply/demand balances that are tight enough to continue supporting the market.

Bespoke did not rule out a pause in the recent rally, especially given that the market is still in a period that has a mix of both heating degree days and cooling degree days, but nothing extreme. However, with the pattern projected to turn warmer as moving to the middle of the month, “the market may want to test the $3.00 level in prompt-month pricing this week first, given continued strength in the data.”

Tudor, Pickering, Holt & Co. (TPH) analysts agreed the recent strength has staying power. The firm noted that the Calendar 2021 strip has picked up around 25.0 cents over the past three weeks, but they still see another 25-cent move remaining, with further upside into 2022.

“We continue to view gas-to-coal switching as the primary balancing mechanism and the recent move higher in price helps bring our model closer to balance,” TPH said.

The firm shaved around 1 Bcf/d off its power burn estimate, with its end-of-season balances now peaking at 3.5 Tcf, or 7% lower than the five-year average.

TPH analysts view this as “a tenuous level” heading into next winter, with Sabine Pass Train 6 and Calcasieu Pass LNG both expected to begin taking gas by year end. This would result in a 2 Bcf/d undersupplied market, drawing storage balances down to 1.2 Tcf exiting next winter, which is 35% below the five-year average.

“As such, we see summer 2021 pricing needing to push an incremental 25 cents higher to shave another 1 Bcf/d off power generation and allow an additional roughly 200 Bcf to flow into storage,” TPH said.

However, the firm’s base model already assumes a hefty 5 Bcf/d year/year drop in 3Q2021 power generation demand — to the lowest level since 2017 — as higher pricing drives economic switching back to coal. The key question in its view is whether coal is up to the task.

“We’ll be keeping a close eye on switching elasticity as we head into summer and if coal ultimately underwhelms, this opens the door to $3.25-pkus gas pricing this summer.”

Even though U.S. exports of the super-chilled fuel typically fall off in the summer as demand softens, the amount of U.S. LNG on the open seas is set to remain strong throughout the summer amid an ongoing need to replenish storage inventories in Asia and Europe.

The prompt Title Transfer Facility (TTF) and National Balancing Point contracts both surged above $8.00 on Friday, while Japan Korea Marker (JKM) futures neared $9.00. Meanwhile, spot prices in North Asia surpassed the $9.00 mark on Monday as prices are being run up amid competition with Europe and the need to refill storage.

In the coming weeks and months, Energy Aspects pointed to a slew of maintenance events and infrastructure issues as fundamental drivers for continued strong global demand. Notably, the firm said loading rates at Gorgon LNG have been below nameplate capacity in the last two weeks, suggesting that maintenance at the facility’s third train has started.

Major planned maintenance events also are scheduled at other Australian facilities through June, as well as in Papua New Guinea and Russia, according to Energy Aspects. “In total, we expect planned outages will remove 3.3 million tons of LNG supply between April-June and another 2.1 million tons between July-September.”

However, the firm’s balances suggest a “relatively loose” summer in Asia, despite an increase in projected imports in China. The firm expects South Korea to need less LNG demand for restocking thanks to the warm end of the winter there, with only around 1.0 million tons needed before the start of the Northeast Asian cooling season.

“That said, we have revised our summer outlook for JKM-TTF spreads on our week/week upward revisions to demand and increasing freight. We estimate the JKM-TTF to remain stable in June-July at around 65.0 cents, before rising to around 80 cents in August for the peak cooling season,” Energy Aspects said.

Meanwhile, exports to Mexico via pipeline have been unseasonably strong, reaching a record 7.1 Bcf/d in mid-April and hovering near that level ever since. The flows moving south of the border are notable since Mexico gas demand typically peaks in the summer.

Over in the Pacific Northwest, May bidweek prices got a boost from a weak hydro outlook.

The NWRFC projects The Dalles Dam water supply forecast for April through September to be 83.7 million acre-feet, about 9.7% lower than the 30-year normal.

EIA closely monitors and uses the water forecast as input into its Short-Term Energy Outlook (STEO). In the April outlook, EIA said overall, it expects hydroelectricity to account for 7% of U.S. electricity generation in 2021, almost one percentage point lower than in 2020.

Opal May bidweek prices shot up 42.0 cents month/month to average $2.845, while the increasingly volatile SoCal Citygate rallied by 92.5 cents to average $3.875.

Gains were tempered — and some pricing locations tumbled — farther east, where production declines were starting to materialize amid multiple pipeline maintenance events taking place across the region.

Wood Mackenzie said estimates show production falling hard in Northeast Pennsylvania (NEPA), largely on the back of a planned monthlong maintenance event on the Transcontinental Gas Pipe Line (Transco). The work is tied to the Leidy South Expansion project.

True production impacts include receipts on Transco, which are down about 400 MMcf/d near the impacted Leidy points, according to Wood Mackenzie. Receipts onto Stagecoach are down 400 MMcf/d as well, with some signs of rerouting to Millennium Pipeline, where receipts are up 160 MMcf/d.

“This 240 MMcf/d deficient is one situation where possible rerouting may lower the total production impact if nominations are revised,” said Wood Mackenzie analysts Nicole McMurrer and Laura Munder. “We are also seeing some wonky scheduling on Tennessee Gas Pipeline over the weekend, which is down 300 MMcf/d.”

Production estimates along Tennessee Gas Pipeline in NEPA showed a day/day decrease of 225 MMcf/d on average for the first of the month in March and April of this year, according to the analysts. Therefore, it is possible this decline could be attributed to first-of-the-month scheduling as well.

The planned pipeline work had a direct impact on prices. Transco-Leidy Line May bidweek prices plunged 65.0 cents month/month to average $1.135. A couple of other Appalachia points also posted decreases from April, but the rest of the region put up gains of at least 15.0 cents or more.In the Northeast, Transco Zone 6 non-NY May bidweek prices averaged $2.040, up 10.5 cents month/month.