May natural gas bidweek quotes weren’t quite able to replicate April bidweek’s 49-cent surge, but May quotes did manage to hold on to most of those gains. The NGI National Bidweek Average eased 3 cents to $2.89, but that still placed it more than $1 higher than the May 2016 National Bidweek average of $1.82. 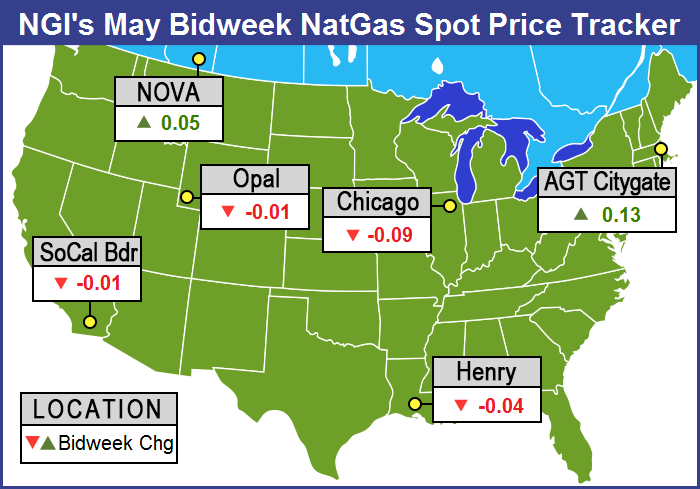 A few scattered points managed to make it into the black, but most were down about a nickel to a dime. The market point scoring the greatest gain went to Westcoast Station No. 2 with an advance of C24 cents to C$2.24/Gj and the weakest point proved to be Iroquois Waddington with a fall of 15 cents to $3.15.

Regionally the Midwest proved to be the weakest with a decline of 8 cents to $2.98, and the Northeast and California were the only two in the black — adding a penny apiece — to $3.08 and $2.91, respectively.

South Louisiana eased 4 cents to $3.06 and South Texas and the Midcontinent were off a couple of pennies to $3.09 and $2.76, respectively. The Rocky Mountains was unchanged at $2.58.

A Chicago area trader Friday told NGI he thought things were setting up for a weak bidweek, but it was a little early to tell. Last week, the trader said, “the weekend has been scheduled, and it’s hard to tell if people are just placing gas for Monday or if they are actively trading. It’s a little weak at the moment, but I can’t tell until we get into Monday. Monday for Tuesday gas will be a little bit more telling.

“I did see less activity. Gas is moving pretty well in and out of the Chicago market. We do have the Vector outage for the first half of the month, and it does seem to be affecting the market a little bit. Gas can’t get into Vector, and anything coming down Northern Border has to go somewhere else. Chicago Citygate prices are a little weaker than normal. There is excess gas that can’t make it over to the Consumers and Michcons and that area.”

A Michigan marketer wasted no time getting his deals done ahead of the May contract settlement. “We bought a little earlier in the week and didn’t let anything go to the close. I didn’t buy basis, we just bought fixed-price deals.”

“We paid anywhere from $3.03 to $3.07 on Consumers and $3 on Michcon. Typically, the screen has been jumping up at the end of the day, and we got tired of that. We typically don’t do all our business at the close, but this month we avoided it altogether.

“Going forward it looks like we are in for 10 days of cooler weather before it goes back to normal.”

Commenting on the under-construction Rover pipeline he asked, “My question is how does that affect storage? The more deliverability you have, the less gas you need in storage, and it costs money to store gas. I don’t hear anybody talking about that. If you had enough pipelines to carry all the gas anyone ever needed, you wouldn’t need gas in storage.”

Bidweek trading last Thursday started winding down but traders still had to factor in weekly storage figures from the Energy Information Administration (EIA).

The EIA reported a storage increase of 74 Bcf for the week ending April 21, just 2 Bcf higher than the industry consensus, and the trading in futures was equally lackluster. At the close on Thursday, June futures had slipped 3.2 cents to $3.239, and July was down 3.0 cents to $3.320. June crude oil fell 65 cents to $48.97/bbl, the first settlement below $49 in a month.

Before the number was released, Citi Futures Perspective predicted a build of 63 Bcf and Tradition Energy was expecting a 77 Bcf increase. A Reuters survey of 18 traders and analysts revealed an average 72 Bcf injection with a range of 62-91 Bcf.

In the same week last year, 64 Bcf was injected, and the five-year pace is for a 57 Bcf build.

“The market didn’t move much and failed to take out the day’s highs or lows when the number was released,” said a New York floor trader. “I think you have to look at $3.15 support and $3.35 on the upside. We just rolled from May to June, so we’ll have to see if we can hold these levels.”

Analysts see the pattern of outsized builds continuing. “The build for last week was slightly more than the 72-73 Bcf consensus view, a minor miss that doesn’t really constitute a surprise,” said Tim Evans of Citi Futures Perspective. “However, this report does nonetheless confirm that the background supply/demand balance has weakened relative to late March and early April, a bearish development in terms of our model. We’ll be looking for somewhat more robust storage injections in the weeks ahead as a result.”

“We believe the storage report will be viewed as neutral,” said Randy Ollenberger of BMO Capital Markets. “Storage is trending below last year’s levels; however, rising associated gas production should keep U.S. storage levels at, or above, five-year averages, assuming normal weather.”

Inventories now stand at 2,189 Bcf and are 358 Bcf less than last year and 299 Bcf greater than the five-year average. In the East Region 25 Bcf was injected, and the Midwest Region saw inventories rise by 17 Bcf. Stocks in the Mountain Region were greater by 5 Bcf and the Pacific Region was up 5 Bcf. The South Central Region increased 22 Bcf.

The Marcellus proved to be the big gainer on the day as Monday power loads were forecast over Friday’s. PJM Interconnection forecast that Friday’s peak load of 34,368 MW would rise to 35,667 MW Monday. The New York ISO predicted that Friday peak load of 17,704 MW would climb to 18,088 MW by Monday.

“There’s not another molecule of demand at the other end of the pipelines out of the Permian,” Scott told NGI. “You’ve got strong hydro runoff in the West, record solar and wind numbers and we are not in the heart of the summer yet. Production is still ramping up, and we may see some tapering in the basis in June, July and August, but as we go back into the shoulder season next year the impacts likely get worse.”

Traders are coveting the short side of the market but for now are not willing to pull the trigger. “Although our trading bias in this market remains bearish, we are currently suggesting a sideline stance after several attempts at the short side that resulted in modest profits and losses,” said Jim Ritterbusch of Ritterbusch and Associates in a Monday comment to clients.

“While downside price follow-through is being precluded by support off of various nonweather factors, sustaining upward price moves has proven equally difficult given an approximate 15% storage surplus that is likely to be maintained through this week’s EIA storage report. But, market action since last Tuesday appears to be pricing in a reduction in the surplus beyond this week that could shave as much as 30-40 Bcf off of the supply overhang by month’s end in keeping this market highly sensitized to even a short string of above normal temperatures.

“As nearby futures are currently showing little change from the beginning of this month, this lack of price direction is keeping the money managers in a neutral camp with net long and short positions unable to stray far from the zero level during recent weeks,” he said.

“Meanwhile, the broad-based cool down in recent days has helped to prop up physical pricing that could lift up to around $3.20 [Monday] in maintaining a normal seasonal discount against June futures. Our technical indicators suggest some further strength that could carry June futures to about the $3.33 level during the next couple of sessions. We may consider another attempt at the short side depending upon…updates to the short-term temperature views.”