May bidweek trading was something of a subdued affair, with most points falling anywhere from a nickel to a dime. 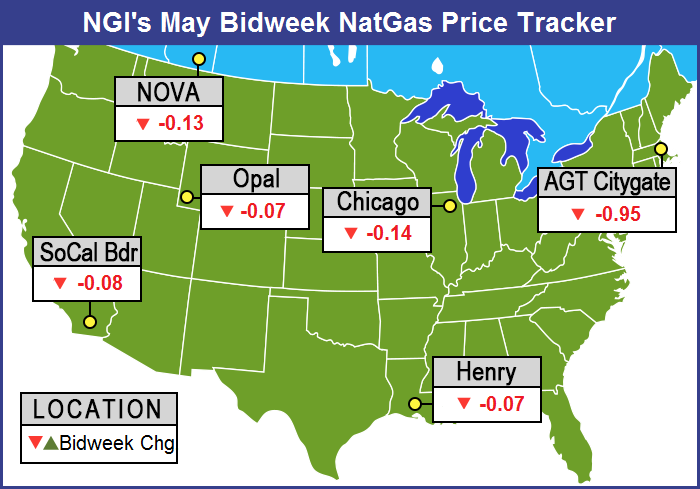 The NGI May National Average Bidweek price, dragged down by bottoming northeastern prices, came out at $2.29, down 6 cents from April. Buyers were all smiles as those who indexed their bidweek purchases to the slumping May Henry Hub futures contract were able to notch deals near 34-month lows as it withered off the board at $2.517.

Then in the two days of trading following the April 28 May contract expiration, the June futures contract bounded higher by more than 21 cents. As of noon on May 1, the June contract was higher still, up another 3.6 cents to trade at 2.787.

Of the heavily traded points, Michcon posted the only Bidweek gain, up a miserly penny at $2.73, and Algonquin Citygates endured the greatest loss, down 95 cents to $2.33. Close behind was Tennessee Zone 6 200 L with a drop of 85 cents to $2.45.

In their debut, NGI’s four new Chicago Citygate breakout indexes showed why the market asked for this additional price granularity, as deliveries into NIPSCO averaged $2.58 versus just $2.49 into Nicor Gas. The rolled up Chicago Citygate index, which continues to be a weighted average of deliveries into the four LDC systems that serve the greater Chicagoland area, as it was before NGI introduced the individual Nicor, NIPSCO, North Shore, and Peoples price listings, averaged $2.52, down 14 cents from last month. For more details on these and other NGI Price Index enhancements, please see:naturalgasintel.com/pr-notice

At the end of bidweek trading Thursday, the 10:30 a.m. EDT EIA storage report caught a number of traders by surprise with the actual 81 Bcf build well below the industry consensus. Natgasweather.com calculated a 92 Bcf injection, and ICAP Energy was looking for an 89 Bcf build. A Reuters survey of 24 traders and analysts revealed an average 85 Bcf with a range of 70 Bcf to 94 Bcf.

Some suspected even higher. Energy Metro Desk (EMD) said, “We see our Survey Index this week came in at 87 Bcf, and we have a sense that the EIA will come in higher than that number by 5 or more. The range is way too wide, and the spread between the three categories we track came in above the 3 Bcf watermark. So something is amiss.” John Sodergreen, EMD editor, estimated a 90 Bcf build.

Prices lost no time reacting to the lower than expected figure. June futures rose to a high of $2.713 after the number was released and by 10:45 a.m. June was trading at $2.692, up 8.6 cents from Wednesday’s settlement.

“We had heard a number anywhere from 85 Bcf to 90 Bcf and we were trading 3 cents lower when the number came out,” said a New York floor trader. “Volume-wise, we are above average at almost 80,000 [June] contracts, and usually we are at 55,000 when the number comes out.

In closing comments Tim Evans of Citi Futures Perspective said, “The 81 Bcf build was still more than the 56 Bcf five-year average build and so the price reaction was clearly a reaction to data that was less bearish than anticipated, and not fully bullish on a seasonally adjusted basis. The increase to 1,710 Bcf put the total 741 Bcf higher than a year ago and 75 Bcf below the five-year average level.”

Even with the lower than expected build Evans saw no reason to change his outlook, and by May 15 he forecasts the year-on-five-year deficit flipping to a surplus of 25 Bcf.

“The DOE did also release its monthly EIA-914 report on U.S. gross (wet) natural gas production for February, which showed a 1.0% increase from the January rate and a sharp 10.7% increase from a year ago, but did at least leave output marginally lower than in December. As with the net, dry gas production data, there may be some support from the idea that production has not reached a new high over the past few months. Natural gas traders may even come to a view more similar to crude oil investors, where a drop in drilling activity and some wavering in the output numbers has been enough to construct at least a significant rebound off the lows.”

Risk managers haven’t been very active in the market as of late. “We are just hoping for some kind of short-covering rally to give us a chance to enter into some short hedges,” said Mike DeVooght, president of DEVO Capital Management, a Colorado-based trading and risk management firm.

He added that he thought a lot of the emphasis on large supplies expected out of the Marcellus and Utica shales and those volumes trying to make their way to more western points had been “discounted in the market, and that’s one of the reasons the funds have been carrying record short positions, end-users are not motivated to buy on a forward basis, and that [trade] has basically gone away. The hedge side of the business has definitely slowed down.

“If we could get some kind of rally where the back months were $3.50, then there are probably some things to do. With the winter at $3.50 or $3.60 then you can put on some collars or something like that. It’s really hard to be a bull in this environment.”

As bidweek drew to a close Thursday, most physical traders made a point of getting their deals done prior to the release of weekly natural gas storage data from the Energy Information Administration (EIA). Overall, the market for Friday gas gained a penny to $2.36.

With May futures settling within a whisper of 34-month lows at $2.517, physical market players were definitely pleased with their May index trading. “I think we did all right,” said a Michigan marketer. “The highest we paid for [Consumers] basis was 25.5 cents, and that puts us under $3. Not a bad deal.

“We went kind of heavy on bidweek and we also have customers who want to fill their storage as soon as possible, and some have wanted to lock in prices. Some even wanted to do two-year deals,” he said.

Weather forecasts called for moderate New England temperatures going into the weekend. Forecaster Wunderground.com predicted that the Thursday high in Boston of 56 would slide to 49 Friday before rising to 59 on Saturday. The seasonal high in Boston is 61. New Haven, CT’s 59 high Thursday was seen reaching 60 on Friday and 65 Saturday, 4 degrees above normal.

In the Midwest, next-day quotes were mostly steady to higher. On Alliance, gas for Friday was seen at $2.55, down 3 cents, but packages at the Chicago Citygates came in unchanged at $2.57. Gas at Demarcation was quoted at $2.51, up 4 cents, and gas on Northern Natural Ventura rose a couple of pennies to $2.50.

Western Market Hubs were mostly higher. Gas on El Paso Permian fell a penny to $2.37, but deliveries to Kern River added 3 cents to $2.39. At the SoCal Citygates Friday gas added 4 cents to $2.70, and parcels at PG&E Citygates added 2 cents to $2.93.