Permian Basin-focused Matador Resources Co. has seen some of the highest initial potential (IP) rates from one of four wells recently completed and turned to sales in the Stateline asset area in Eddy County, NM. 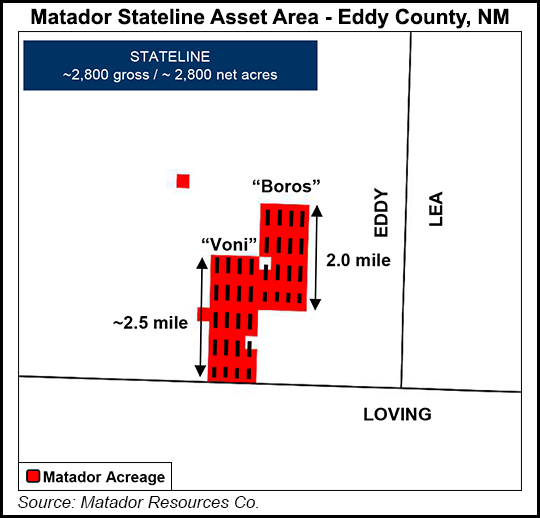 The Dallas-based operator said Tuesday the test results from the Boros No. 215H well showed 24-hour IP production of 4,584 boe/d, comprising 2,750 b/d of oil and 11.0 MMcf/d of natural gas. Matador said the results were the best it has achieved for the Wolfcamp A-Lower formation and among the highest IP test results for any formation in the Delaware.

The Boros No. 201H test result, which showed IP production of 3,143 boe/d, also is among the top five IP test results that Matador achieved for wells completed and turned to sales in the Wolfcamp A-XY formation. Furthermore, the IP rates from the Boros Nos. 215H, 216H and 217H wells were three of the top four IP test results achieved to date in the Wolfcamp A-Lower formation throughout the Delaware, the company said. All wells were two-mile laterals.

The exploration and production company acquired the 2,800 gross and net acres comprising its Stateline asset area in a Bureau of Land Management sale in September 2018. Matador expects to turn the remaining nine Boros wells to sales over the next two weeks.

“With the 13 Boros wells turned to sales, we are expecting a significant increase in our oil and natural gas production during the fourth quarter of 2020 and are also on track to be free cash flow positive in the fourth quarter, a major milestone,” said CEO Joseph Wm. Foran.

All the oil, natural gas and water from the wells is being gathered via the San Mateo system that was expanded and brought online at the beginning of September. The expansion of San Mateo’s Black River cryogenic natural gas processing plant added an incremental capacity of 200 MMcf/d to bring the total designed inlet capacity to 460 MMcf/d.

The company estimates that it has at least 75 additional wells to drill in the Stateline asset area, including the 13 Voni wells currently being drilled on the western portion of the leasehold. It has a 100% working interest and an 87.5% net revenue interest in the wells.

“These costs are among the lowest drilling and completion costs per lateral foot that Matador has achieved to date in the Delaware Basin,” Matador said. “The economic returns from all these wells should be significantly enhanced by the lower well costs.”

Foran touted the Boros well results, along with those from the Rodney Robinson and Ray State wells, as a means of improving capital efficiency through transitioning to drilling and completing two-mile or longer laterals in the Delaware.

In addition to the Permian assets, the independent also has holdings in the Eagle Ford Shale in South Texas and in northwestern Louisiana’s Haynesville Shale and Cotton Valley formation.During the second quarter, Matador reported that average net oil volumes climbed to a record quarterly high of 43,074 b/d, up 6% sequentially and from 36,767 in 2Q2019. Natural gas output jumped 23% year/year but fell 1% sequentially to 181.4 MMcf/d.