Dallas-based independent Matador Resources Co., in sync with its midstream affiliate, pulled out all stops in the third quarter by reducing costs at a record rate while it boosted its oil and natural gas production. 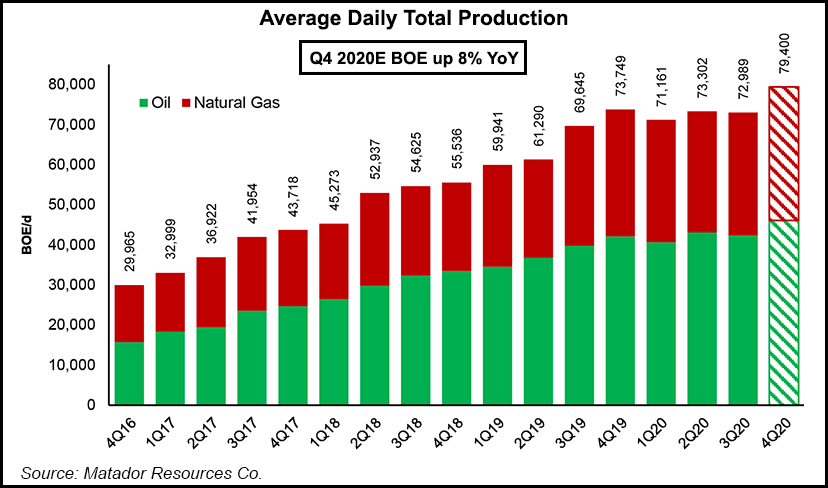 The portfolio stretches across oil- and natural gas-rich basins of Louisiana and Texas, but operations primarily are directed to the Permian Basin’s Delaware sub-basin, where it works its magic in the Wolfcamp and Bone Spring formations.

While the talk by the management team during the third quarter conference call on Wednesday centered around the productivity gains in the Permian, some analysts wanted to hear whether there have been any proposals to merge.

“At this present time, I don’t see much of an advantage” to consolidate assets, Foran said. “Look, where we are achieving, what everybody wants to have, which is production…We have grown from a standing start…when we went public in 2012. We had no production in New Mexico.”

Today, Matador is the seventh top Permian producer, he said. “As this consolidation happens, we’ll probably move up to five or six” of all the basin’s operators. The returns “are as strong as anybody. Now having said that, we don’t think we need a partner.

“We also recognize we’re a public company…So if someone were to make a serious offer, we’d give a serious consideration.” Foran is the largest single shareholder in Matador, and the executive team also holds stakes in the company.

The “primary interest” would be to improve the investment for shareholders. For the “no-premium deals,” such as the stock trades, “we don’t see the appeal.”

Chevron Corp.’s agreement to purchase Noble Energy Inc. includes a substantial Permian leasehold. Nearly all of the other big announcements are stock trades.

In addition to its broad leaseholds, Matador has a substantial midstream affiliate in San Mateo to handle gas, oil and produced water volumes, which “gives us a big advantage operationally and financially…

“As you’ve heard us say, often we reserve the right to get smarter. If some opportunity is presented in front of us that is good for our shareholders, we’ll do it, but we’re shareholders too…We have a big ownership. So we’re motivated. We just haven’t seen…any deals that would be a good fit culturally or financially or from our property asset base.”

Investor relations chief Mac Schmitz said, “we’re not opportunity-poor, we’re opportunity-rich. So we’ve got a lot of things…If the right deal comes along and it’s accretive to what we’re doing, we certainly would be willing to look into it and do what’s best for the shareholders.”

For now, Matador will keep on keeping on, reducing costs and improving performance, Foran said. As an example, 83% of the lateral lengths of wells drilled this year have been longer than one mile. That compares with 29% of the lateral lengths in 2019 and 9% in 2018.
Turning the longer and more productive wells to sales in the Delaware “above expectations” have been essential to success this year, Foran said.

Through the end of the year Matador expects to operate three drilling rigs, with two in the Stateline asset area. In addition, 2.7 net operated wells are expected to be completed, all two-mile laterals in the Rustler Breaks leasehold.

Strong results in the quarter were attributed in part to an expansion of the San Mateo midstream venture, in which Matador partners with Five Point Energy LLC. The affiliate placed into service an expanded Black River Processing Plant, as well as 43 miles of large-diameter natural gas and oil pipelines in Eddy County.

The expansion added incremental designed inlet capacity of 200 MMcf/d, bringing the total to 460 MMcf/d.  The plant gathers and processes gas from Stateline and the Greater Stebbins, as well as the Rustler Breaks developments.

“Today, the oil, natural gas and water production from both the Stateline asset area and the Greater Stebbins Area, as well as the Wolf and Rustler Breaks asset areas, is being gathered by San Mateo via its 335 miles of midstream pipeline infrastructure,” Foran said. The expanded infrastructure should fuel “record levels” of production and San Mateo revenue in the final three months of this year.

Even with the challenges from the coronavirus and the “abrupt decline” in oil prices since early March, “the Matador and San Mateo teams have kept their eyes on the ball,” Foran said. “In doing so, they have delivered multiple important projects in 2020 that are providing significant value for Matador and its stakeholders.”

During 3Q2020, Matador completed and turned to sales 19.3 net wells. All had lateral lengths longer than one mile; 90% were two-mile laterals.

Lease operating expenses hit a record low of $3.48/boe, an 11% sequential decrease and down 25% year/year. The gains came in part from the San Mateo produced water system, which reduced trucking and service costs. General and administrative expenses averaged $2.25/boe, up 2% sequentially but down 29% from a year ago.

Drilling and completion (D&C) costs for all operated horizontal wells completed and turned to sales averaged $790/lateral foot, the lowest in company history. Costs were down 10% from 2Q2020 and 32% lower than in 3Q2019.

Capex came in at $95 million, below an estimate of $117 million. About $10 million in savings were attributable to the improved operational efficiencies and the lower-than-expected D&C costs. 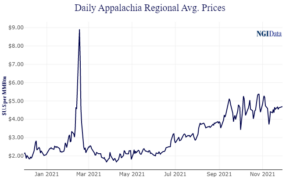 Pennsylvania’s unconventional natural gas production grew at pre-pandemic rates through the first nine months of the year as prices and demand rebounded, according to the state’s Independent Fiscal Office (IFO).  The IFO said unconventional production came in at 1.884 Tcf in 3Q2021, or 6.8% higher than the year-ago period, resembling the strong rates of the…