Matador Resources Co., which is focused on the liquids-rich portion of the Eagle Ford Shale, grew its oil production almost eight-fold last year to just over 1.2 million bbl from 154,000 bbl in 2011 and 33,000 bbl in 2010. The company will stay focused on the Eagle Ford and growing its Permian Basin position as gas prices aren’t high enough to support more Haynesville Shale activity, CEO Joe Foran said Thursday. 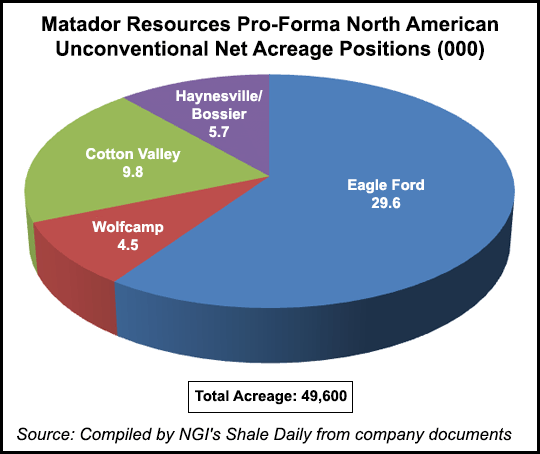 Asked about the potential for asset acquisitions during the year, Foran said he sees deals in the pipeline and is “encouraged and optimistic” that Dallas-based Matador will bolt on some acreage in the Eagle Ford and will continue to add to its position in the Permian Basin.

Matador’s Haynesville acreage is all held by production, Foran said, so there’s no rush to return to drilling there until natural gas prices improve and look as if they will continue to rise. About $4.00/MMBtu would do it, he said, and drilling would likely resume with a rig that’s already in the area.

“We have been particularly encouraged by the production performance of a number of our recent wells and believe these results reflect the progress we continue to make in the design of our fracture treatments and the implementation of ‘zipper,’ or simultaneous fracks as well as our practice to flow back wells on smaller chokes following stimulation,” Foran said. “These results have been achieved while we continue to follow our drilling schedule and operational plans, including drilling multiple wells from the same pad prior to completing them and shutting in producing wells while newly drilled offset wells are hydraulically fractured. In addition, we believe our artificial lift program is resulting in higher volumes of oil being produced from existing wells where artificial lift has been installed.”

For 2012 Matador, which went public in February 2012, reported a net loss of about $33.3 million compared with a net loss of $10.3 million in 2011. The 2012 loss was entirely attributable to total full-cost ceiling impairment charges of $63.5 million during the year, Matador said. “These impairment charges resulted primarily from the decline in the value of the company’s natural gas reserves during 2012 as a result of significantly lower natural gas prices and the removal of approximately 97.8 Bcf (or approximately 16.3 million boe) in proved undeveloped natural gas reserves in the Haynesville Shale.”