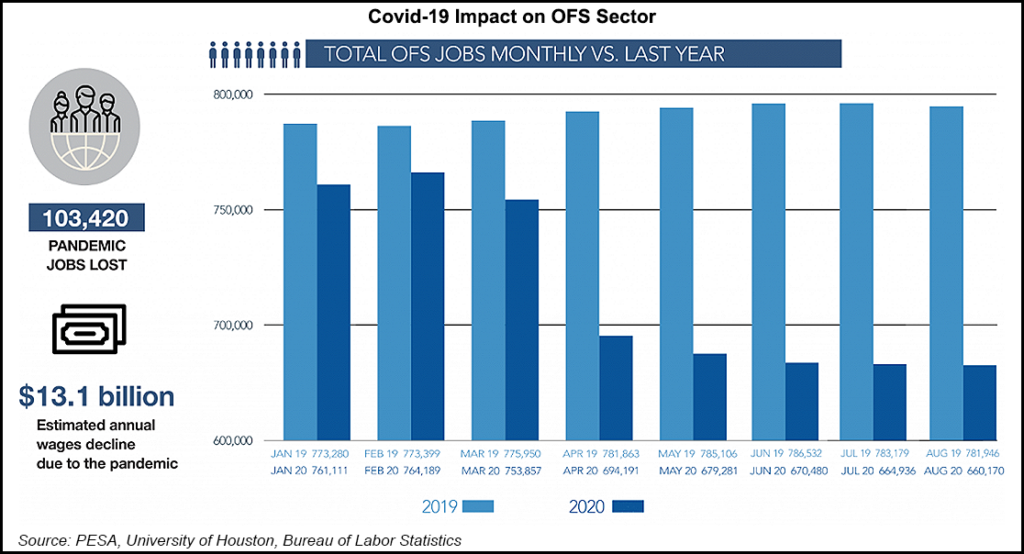 The U.S. oilfield services (OFS) industry through August had lost more than 100,000 jobs since the coronavirus pandemic began eating away at oil and gas demand, according to the Petroleum Equipment & Services Association (PESA).

And the future remains a bit wobbly, according to PESA, which represents OFS operators involved in oilfield equipment manufacturing, drilling, well completions and pressure pumping.

“While the worst of the cutbacks appear to be behind the industry, considerable uncertainty about the future remains because a surge in Covid-19 cases could derail the economic recovery and suppress demand,” researchers noted.

OFS employment overall has fallen by an estimated 121,000 jobs since August 2019 and is at its lowest point since March 2017.

Based on preliminary data from the Bureau of Labor Statistics (BLS), job losses in August began to stabilize, with about 2,600 people laid off. That was the lowest number since Covid-19 began to reduce activity.

Using BLS data and in consultation with researchers from the Hobby School of Public Affairs at the University of Houston, PESA estimated domestic OFS sector jobs declined by 13.5% to 660,170 in August from 764,189 in February.

The heaviest job losses across the sector were in April, with 59,306 people laid off. The layoffs were the largest one-month total since at least 2013, according to PESA.

According to the PESA analysis, seven energy producing states each have lost at least 4,000 OFS sector jobs to date this year, led by Texas with an estimated 59,000. Louisiana has culled 10,200 jobs, while Oklahoma has reduced its workforce by 9,200. Colorado is down by 5,000 jobs, while New Mexico and California each have lost about 4,500 jobs. Pennsylvania has seen its OFS workforce fall by 4,400 to date this year.

An analysis of Small Business Administration data also determined that around 180,000 of the OFS jobs have been supported by loans from the federal Paycheck Protection Program.