The Massachusetts Energy Facilities Siting Board (EFSB) on Thursday approved Footprint Power LLC’s plans for a 692 MW natural gas-fired power plant in Salem, MA, which was proposed with one unusual stipulation: its greenhouse gas (GHG) emissions must decrease over the course of a limited lifespan. 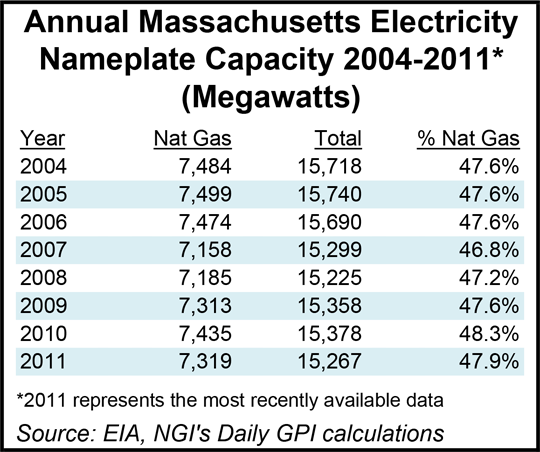 The proposal approved by the EFSB was the result of a settlement agreement between Footprint and the Conservation Law Foundation (CLF) that requires the plant to reduce or offset annual emissions from an initial 2.28 million tons of carbon dioxide equivalent at the planned 2016 opening down to 528,874 tons when it ends commercial operations, “no later than January 1, 2050.” Massachusetts has been targeting the existing Salem Harbor facility for emissions reductions for more than a decade (see Daily GPI, April 24, 2001) and CLF had waged a legal battle against Footprint’s initial plans for the new plant.

“The settlement marks the first time that an EFSB decision has incorporated deep GHG emission reductions under the Global Warming Solutions Act for gas-fired generation facilities,” said the state’s Executive Office of Energy and Environmental Affairs (EEA). “The settlement also makes Footprint the first gas-fired plant in the nation to be approved with such stringent provisions, intended to dramatically reduce carbon emissions over the life of the facility. The highly efficient Footprint plant will also play an important role in facilitating greater levels of intermittent renewable resources such as wind and solar power in the New England energy mix.”

In a related move, EEA said it would make up to $2 million available to fund renewable energy projects in any community in the state where closure of coal-fired power plants is planned.

The facility, which would include a new quick-start combined-cycle gas turbine, would be built near the existing Salem Power Station, a coal-fired power plant that is slated to close May 31.

“This new facility will provide an unprecedented level of efficiency and flexibility that will provide a bridge to a future of higher and higher levels of demand-side management and renewable generation and a gradual transition to a marketplace that relies on gas-fueled facilities as back-up power to be used only as needed,” Footprint said. The company plans to use some portions of the Salem Harbor site for the assembly, staging and launching of floating wind assemblies for offshore wind energy projects.

“At a time when many across the nation and the world see unrestricted growth of natural gas as a climate solution, this is the first settlement providing a pathway for new natural gas infrastructure to help enable rather than undermine a clean energy future,” said CLF President John Kassel. “By recognizing the need to limit greenhouse gas emissions from natural gas-fired plants, this agreement reaffirms that natural gas and other fossil fuel projects must comply with state climate mandates, and has important implications for similar projects in the region and nationally.”

Salem Harbor is the first project by Bridgewater, NJ-based Footprint, which was founded in 2009 and acquired the 65-acre Salem Harbor site in August 2012.