U.S. utilities withdrew 51 Bcf natural gas from storage for the week ended March 18, the Energy Information Administration (EIA) reported Thursday. The result fell short of market expectations for a pull in the high 50s Bcf, but futures forged ahead regardless. 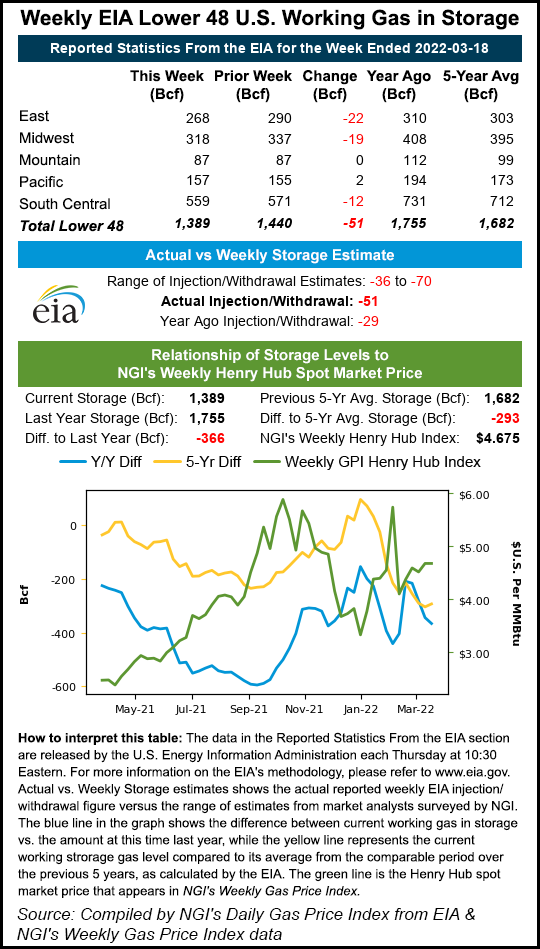 Ahead of the EIA print, the April futures contract was down 7.3 cents at $5.159/MMBtu – after a three-day rally that sent futures to two-month highs. The prompt month ticked a touch lower to around $5.154 when the EIA data was released at 10:30 ET.

“Temperatures were warmer than normal over the western, northern, and eastern U.S., while a touch cool over Texas, the South and Southeast,” NatGasWeather said of temperatures during the latest EIA report period.

Markets, however, have looked past domestic fundamentals this week, focusing instead on robust demand for U.S. liquefied natural gas (LNG). Domestic exports of the super-chilled fuel have consistently topped 13 Bcf – approaching records — amid Russia’s month-long war in Ukraine.

European countries have vowed to wean themselves from Russian energy in protest of the conflict and are increasingly calling for additional LNG.

Prior to the EIA report, a Bloomberg survey found a median prediction for a 59 Bcf decrease for the week. Withdrawal predictions ranged from 42 Bcf to 64 Bcf. Reuters’ poll found estimates spanning withdrawals of 36 Bcf to 70 Bcf, with a median estimate of 58 Bcf. The Wall Street Journal’s survey landed at an average draw expectation of 56 Bcf. Estimates ranged from decreases of 42 Bcf to 66 Bcf.

The five-year average for the period was a pull of 62 Bcf, while EIA posted a 29 Bcf decrease for the comparable week in 2021.

The decrease last week lowered inventories to 1,389 Bcf, below the year-earlier level of 1,755 Bcf and the five-year average of 1,682 Bcf.

The East and Midwest led all regions with pulls of 22 Bcf and 19 Bcf, respectively. The South Central followed with a draw of 12 Bcf that included an 8 Bcf pull from nonsalt facilities and a decrease of 3 Bcf in salts. Pacific region stocks, meanwhile, increased by  2 Bcf, while Mountain inventories were flat.

EIA noted that totals do not always equal the sum of components because of independent rounding.

Looking ahead to next week’s EIA report, analysts on the Desk were generally expecting the onset of injection season, with a storage increase of around 30 Bcf or less.