A cold weather system that was sweeping across much of the United States helped launch February natural gas forwards markets up an average of 10 cents between Jan. 20 and 26, according to NGI’s Forward Look. 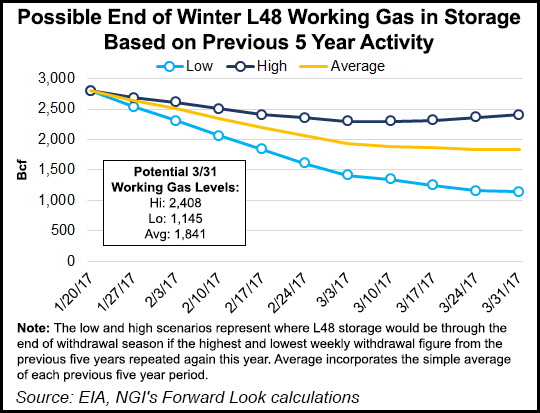 Forwards markets took their cue from Nymex futures, where the February contract rose about 18 cents over four straight days of gains to settle Jan. 26 at $3.38. Strong increases were seen across the front of the curve, with the Nymex March futures contract climbing 19 cents during that time to reach $3.40, the summer 2017 strip rising 18 cents to $3.47 and the winter 2017-2018 strip edging up 15 cents to $3.62.

The strong gains during the week were largely centered on a cold weather system currently blanketing much of the country and bringing areas of rain and snow, while dropping overnight temperatures below freezing over all but the far southern part of the U.S., according to forecaster NatGasWeather.

The cold blast, which ends a period of mild weather, was expected to be followed by additional weather systems through the following week, although still with milder breaks in between. This will lead to swings in natural gas demand between slightly above and slightly below normal, the forecaster said.

Still, the week’s rally needed a bit more juice to be sustained. Overnight Thursday, the Nymex futures strip experienced a signiﬁcant amount of selling, which pulled prices near the front of the curve down to around $3.25. “Since then, however, we’ve seen prices recover a bit as they’ve pulled back above the $3.30 support level that we expected to play a role in the expiration of the February contract [Friday],” weather forecaster Bespoke Weather Services said.

Indeed, by midday Friday, the front-month contract was trading about 5 cents lower at $3.32 as the latest weather data failed to prove convincing enough just how much frigid arctic air is expected to reach the U.S. beginning around Feb. 4-5. At the close of the regular session, the February contract expired at $3.391.

NatGasWeather said there is an ebb and flow to temperature trends in weather data. Late Wednesday and overnight, it was toward the colder side, and prices rallied. Thursday, it trended toward the milder side, with prices selling off. “The markets are essentially getting played by inconsistent weather data where subtle shifts in the location of where they resolve the arctic front is leading huge changes in anticipated nat gas demand from one suite of weather model data to the next,” the forecaster said.

As of Friday morning, weather models indicated that the arctic air over southern Canada would spill into the northern Rockies and Plains beginning Feb. 5, but the data trended milder as it struggled to advance very far into the U.S., NatGasWeather said.

“This seems to be viewed especially negative because the natgas markets could be feeling the winter heating season quickly slipping away. Bigger picture, this means soon-to-be surpluses in supplies versus the five-year average will now stall around, even for numerous weeks. This is clearly disappointing since the markets were expecting deficits of several hundred Bcf by this time. There are still ways deficits increase in late February and March, but numerous cold and sustained outbreaks would be required,” NatGasWeather said.

Bespoke said the Global Forecast System ensembles still show a decent amount of long-range bullish risk, but the medium-range is looking slightly less impressive, which appears at least partly responsible for the price declines overnight Thursday. The Canadian Meteorological Center ensembles turned far more bearish in the long range, too, showing more ridging as the East would likely see temperatures return back above average. The European Centre for Medium-Range Weather Forecast ensembles remain in the middle, holding some bullish risks but not showing as cold a pattern in the long range, with climate guidance similarly not showing the widespread bullish risks of [Thursday].

“Overall, bullish weather risks heading into the weekend have pulled back markedly, though the kneejerk overnight response may have been too much,” Bespoke said.

Friday’s intraday rebound may also have to do with the slight bullish miss in Thursday’s storage report, Bespoke said. The U.S. Energy Information Administration reported a 119 Bcf withdrawal from storage for the week ending Dec. 20, just a couple of Bcf greater than expectations.

“The 119 Bcf net withdrawal for last week was nearly in line with the consensus expectation and so neutral on that score,” Tim Evans of Citi Futures Perspective after Thursday’s storage report was released. “At the same time, however, this was a big step down from the 243 Bcf drop in the prior week and below the 176 Bcf five-year average, and so bearish on a seasonally adjusted basis. Storage remains at a relatively comfortable level, 20 Bcf (0.7%) below the five-year average as we approach the midpoint of the winter on Groundhog Day, Feb. 2.”

But the coming week’s storage report is also expected to be a doozy as the market is likely pricing in a drawdown smaller than 100 Bcf, Bespoke said.

Diving into the natural gas forwards markets, most markets followed the Nymex’s lead, putting up double-digit gains through the winter 2017-2018 strip. But several Northeast points moved against the pack as the current cold weather system comes as several restrictions along a major pipeline in the region are in place.

A Jan. 26 notice on the Transco website said the pipeline had limited flexibility to manage imbalances and strongly encouraged all shippers to manage their system requirements to ensure a concurrent balance of receipts and deliveries daily.

Absent voluntary compliance, Transco said it may be required to take further action, including issuing Imbalance operational flow orders (OFO). These OFOs may include shipper(s)-specific OFOs directed to parties that have imbalances that have affected or may, affect the operational integrity of the system.

Meanwhile, Transco has several restrictions in place through various compressor stations and laterals along its pipeline, including at the Marcus Hook lateral in Pennsylvania and the Trenton lateral in New Jersey.