The week’s physical natural gas trading saw the big downward movers for the week ended Feb. 27, the Northeast and the Midwest, continue to lead the market lower as the calendar continued to march toward spring and moderating temperatures. The NGI Weekly Spot Gas National Average tumbled $1.84 to $3.61, and regionally the Northeast proved to be the biggest loser dropping a whopping $6.17 to average $5.02 and the Midwest shed 74 cents to $4.17. 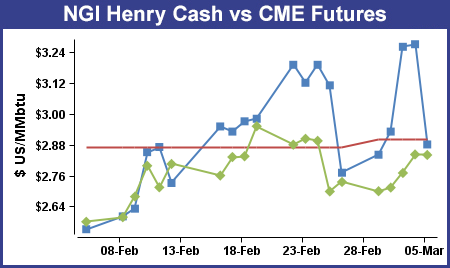 Of the actively traded individual market points, none advanced, and the week’s biggest decline was posted in the Northeast with Algonquin Receipts falling $16.25 to average $8.93. The week’s greatest “gain” was seen at the Houston Ship Channel with a slide of only 4 cents to $2.98.

April futures gained 10.5 cents on the week to $2.839 helped by Thursday’s driving force of the Energy Information Administration (EIA) report of a withdrawal from inventories of 228 Bcf, somewhat higher than expectations. April futures rose to a high of $2.813 after the number was released and by 10:45 EST April was trading at $2.797 up 2.8 cents from Wednesday’s settlement. By the time the dust had settled at the close April had risen 7.2 cents to $2.841 and May was up 7.4 cents to $2.880.

The 10:30 a.m. release of storage figures for the week ending Feb. 27 caught a few off guard as the actual figure of 228 Bcf was about 6 Bcf higher than expected. A Reuters survey of 23 traders and analysts showed an average 222 Bcf with a range of 195 Bcf to 235 Bcf. Analysts at IAF Advisors hit the nail on the head with an estimated 228 Bcf pull, and industry consultant Bentek Energy utilizing its flow model predicted a 224 Bcf withdrawal.

Before the release of the data analysts also had to factor in what the impact of well freeze-offs might have on the data.

“Traders were looking for anywhere from 222 Bcf to 227 Bcf, and the market floated higher after the data was released,” said a New York floor trader.

“It doesn’t feel like any bullishness. It gave a little incentive for short term buying, but I don’t think there is any incentive do anything until you get to the $3 to $3.01 area. Shorts are comfortable here.”

Tim Evans of Citi Futures Perspective noted that “The net withdrawal was more than last week’s 219 Bcf decline and far above the 115-Bcf five-year average for the date. Although price reaction has been muted so far, we consider this a constructive report.”

Inventories now stand at 1,710 Bcf and are 492 Bcf greater than last year and 143 Bcf below the 5-year average. In the East Region 121 Bcf were withdrawn and the West Region saw inventories decrease by 16 Bcf. Stocks in the Producing Region declined by 91 Bcf.

If trading natural gas futures weren’t challenging enough, traders Friday had errant price data from the New York Mercantile Exchange to put up with. “I saw the prints go up and I called the floor and thought ‘that’s got to be someone on the floor screwing up,'” said Tom Saal, vice president at INTL FC Stone in Miami.

“I asked if anyone from Nymex was on the floor and to ask them about $3.77 in the April 2015 futures contract; 30 seconds later the guy comes back and says they messed up.”

In an announcement Nymex also called the price a “preliminary settlement.” “That’s the first time I have ever seen settlements occur during the day,” said Saal.

Analysts are maintaining a bearish posture on the market even with a hefty 200 Bcf or thereabouts withdrawal report expected for next week. “This market appeared to respond appropriately to [Thursday’s] bullish EIA storage report,” said Jim Ritterbusch of Ritterbusch and Associates in closing comments Thursday. “The 228 Bcf withdrawal was much larger than we had anticipated as the deficit against five-year averages stretched by a whopping 113 Bcf. Total supply has now dropped to 1.71 Tcf with another draw approaching 200 Bcf likely tabled for next week’s EIA report given this week’s extreme cold.

“But we will need to fine-tune this expectation in the light of a significant warmup that will begin tomorrow. These milder temps are generally expected to extend out to about the official beginning of the spring period. And as the market is forced to focus more on the supply side of the equation, an expected record pace of production will become a larger topic of conversation.

“Despite the fact that [Thursday’s] storage figure was appreciably larger than we had expected, it failed to alter our short-term bearish opinion of this market. We still favor fresh short positions at current levels within the $2.80-2.88 zone, risking to above $2.95 on a close only basis while leaving downside possibilities to the $2.50 area on the table. While the fundamental landscape has shifted with end-of-season supply now likely to come in below 1.5 Tcf, such a supply would be sharply upsized from last year’s bottom of about 0.825 Tcf,” he said.

In Friday’s physical trading natural gas buyers were in no mood to spring for weekend and Monday packages, with forecasts of rising temperatures and more seasonal weather at hand. Prices fell hard and only a single lightly traded point saw positive movement.

Double-digit losses were common at most points, and locations in the East and Northeast endured single and double-dollar digit declines. The average physical market loss was $1.36 to $2.80. Futures moved little and were held to a 9-cent trading range. At the close April had fallen 0.2 cent to $2.839 and May was off 0.8 cent to $2.872.

The Mid-Atlantic took the major hits, but New England locations were not far behind, and rising temperature trends from New England through the Ohio Valley to the Midwest and Great Lakes were enough to keep buyers on the sidelines. Wunderground.com forecast that the 26 high in Boston Friday would climb to 36 Saturday and reach 43 by Monday, the normal high. Pittsburgh’s Friday peak of 24 was expected to jump to 42 Saturday and make it to 47 Monday. The normal high in Pittsburgh is 45 in early March. Chicago’s 28 high Friday was predicted to reach 43 both Saturday and Monday, the normal high.

New England points weren’t too far behind. Gas at the Algonquin Citygates for weekend and Monday delivery skidded $7.58 to $6.65, and parcels at Iroquois Waddington lost $3.72 to $3.77.

The Ohio Valley is expected to see welcome warmth. “A winter chill around Pittsburgh this weekend will be ahead of milder weather forecast for the upcoming week,” said AccuWeather.com meteorologist Alex Sosnowski. “The more typical March weather will allow people to get outdoors and some to catch up on shopping, [and] in the wake of the recent snowstorm and cold nights this weekend, temperatures will rebound to seasonable levels during the second week of March.

“Highs are forecast to average in the 40s starting on Sunday. With daytime highs well above freezing and nights near or below freezing, the existing snow cover will gradually melt. Area rivers will have to be watched for possible ice jams with the upcoming milder weather forecast. However, the freeze and thaw cycles will not create rapid runoff initially.

“A slow-moving storm with rain is forecast to remain in the South next week, [and] even warmer weather is poised for later in the month. Should that warmth be accompanied by drenching rain, then the risk of flooding will increase for the Northeast,” Sosnowski said.

Midwest points also saw hefty price declines. Gas for weekend and Monday delivery on Alliance fell 80 cents to $2.90, and deliveries to the Chicago Citygates slumped 56 cents to $2.84. Gas on Michcon was quoted 52 cents lower to $2.97, and parcels at Demarcation came in at $2.68, down 46 cents.

Gas buyers for weekend power generation across the MISO footprint will likely have the challenge of balancing mild temperatures and strong, though highly variable, wind generation. “Cold high pressure will depart [Friday] supporting fair weather and moderating temperatures,” said WSI Corp. in its Friday morning forecast. “A west-southwest breeze ahead of a duo of Alberta Clipper-like systems may further moderate the cold weather during the weekend, as well as brush the upper Midwest with a chance of snow showers. Fair and mild, more spring like warmth may develop early next week with the potential for highs well into the 40s and 50s, even some 60s.

“Elevated, albeit variable, wind generation is expected during the next couple of days. Output may occasionally peak upward of 7-9 GW. Wind generation may drop off by Sunday morning, but conditions may increase early next week.”

Saal, in his work with Market Profile, sees the market continuing its upward momentum and came close to the week’s 150% breakout target of $2.881. “Wednesday was the fourth non-trend day in this lower price consolidation range, then followed by a 3-2-1 up day, inferring short-covering,” he said. “And we know who is net short big time.”