The Energy Information Administration (EIA) reported a 78 Bcf withdrawal for the week ending Feb. 8, a draw that came in slightly below expectations. 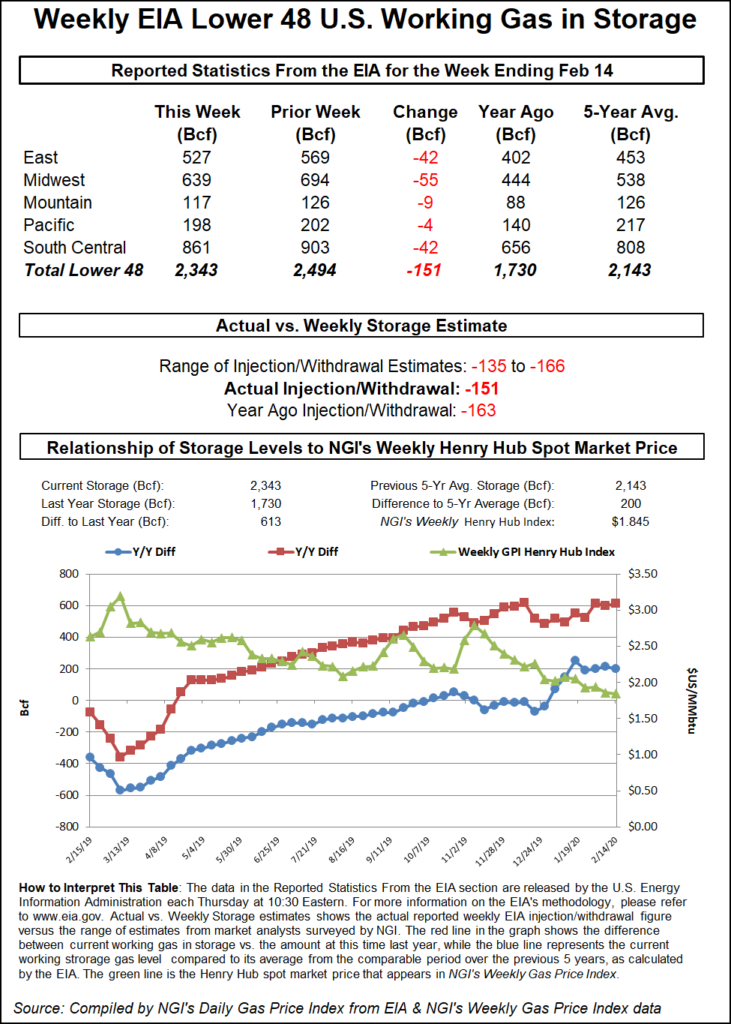 Still, some estimates ahead of the storage report were several Bcf below the EIA print and thus, the market viewed the pull as a non-event. A Bloomberg survey of 11 market participants had a draw range of 77-106 Bcf, with a median draw of 82 Bcf. A Reuters survey of 21 analysts had the same range, with a median of 84 Bcf. NGI estimated a 73 Bcf withdrawal.

The Nymex March gas futures contract, which was trading just 1-2 cents higher at around $2.59 before the EIA release, continued to trade at that level immediately following the report.

“After a couple weeks of volatile data, this fit our expectations better as our number (-82 Bcf) was slightly below the analyst consensus as well. This number is still quite loose and in itself will not inspire a rally. However, much of the looseness last week appears due to liquefied natural gas exports that were significantly limited due to fog at key Southeast ports,” Bespoke chief meteorologist Jacob Meisel said.

Balances this week have tightened up significantly, and Bespoke is looking for tighter EIA prints the next few weeks. The result is a risk that the market has a “sell the rumor, buy the news” event whereby even though the number itself was not bullish, there were plenty of bearish risks and the market knew it would be bearish, the firm said. This sets up the market “for a bounce in anticipation of tighter numbers and more supportive balances.”

Meanwhile, weather outlooks for the remainder of February continue to be closely watched as any additional cold snaps could send storage deficits even lower before the official end of the withdrawal season. The latest weather data overnight Wednesday stabilized a bit, with most data seeing cold return during Feb. 27-28.

DTN meteorologist Steve Strum said he had very high confidence in cold returning to the central/western United States during this period, and while he thinks the cold eventually spreads east, “how soon remains unclear.

“I wouldn’t be surprised if the 11-15 ends up colder across the East than currently indicated,” Strum said on Enelyst, an energy chat room hosted by The Desk. “But the pattern is remarkably persistent. I think the first half of March is cold, then warms mid-month, but the timing of that is uncertain.”

Indeed, much of this winter’s weather has taken forecasters by surprise given the volatility and uncertainty in weather models. “This has has been by far the most bizarre February from a meteorological standpoint in that it’s looking like a La Nina/Epic negative Pacific North American pattern for the bulk of Month. Calgary is looking at coldest February in many years. As long as I see negative Eastern Pacific Oscillation signatures, no need to go below normal heating degree days as we approach March,” forecaster Corey Lefkof said on Enelyst.

Broken down by region, the Midwest reported a 30 Bcf withdrawal, the East pulled 24 Bcf and the Pacific withdrew 17 Bcf. The South Central region reported a 4 Bcf net injection, with a 7 Bcf injection into salt facilities and a 4 Bcf withdrawal from non-salt.