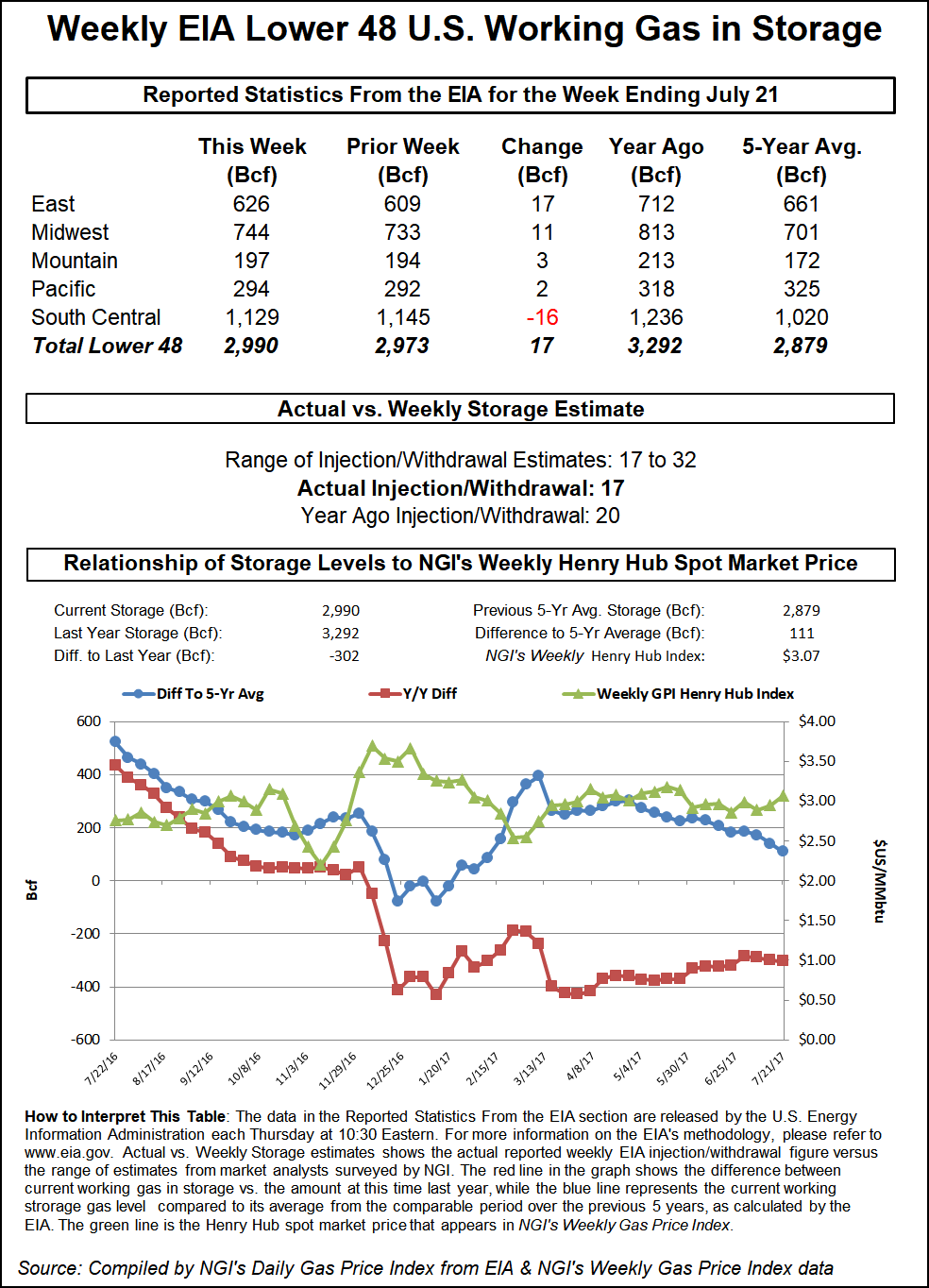 Spot gas prices also ratcheted higher as several pricing hubs across the country posted 30-day highs, most notably in the Appalachia supply region. Permian Basin prices also posted substantial gains, although increases likely are not related to a line rupture that was reported by NGI on Wednesday and are more likely tied to the overall strength seen in the cash market. The NGI National Spot Gas Average rose 2 cents to $2.87.

The EIA reported a 35 Bcf build into natural gas storage inventories for the week ending July 27, well below market expectations that clustered around a build in the low 40 Bcf range.

By region, the East injected 25 Bcf into inventories, the Midwest injected 28 Bcf and the South Central withdrew 12 Bcf. The Pacific posted a withdrawal of 7 Bcf.

Prior to the report, consensus had settled around a 43 Bcf build, in line with the five-year average. Kyle Cooper of IAF Advisors had projected a 40 Bcf build, while Genscape Inc. expected a 45 Bcf injection. A Bloomberg survey had a range between 25 Bcf and 58 Bcf, with the median response of survey participants coming in at 43 Bcf. Intercontinental Exchange settled at 43 Bcf.

The EIA’s reported 35 Bcf build was 5 Bcf below projections by Bespoke Weather Services, which said “today’s print continues to demonstrate a tight market (albeit one that has loosened slightly from last week’s print).

As traders began digesting the print, the September futures contract climbed to $2.795 within the half-hour of the report and then went on to settle at $2.816, up 5.8 cents on the day.

“Bulls have clearly reclaimed momentum off a third straight bullish EIA report miss, pushing prices back above $2.80 and proving that even with record production, deficits are hefty and will be very slow to improve,” NatGasWeather said.

In recent months, even with persistently low storage inventories, much of the market chatter has been centered on record production.

“We estimate it is unlikely that storage will reach the five-year average (around 3.8 Tcf) this refill season, but we believe that investors are more comfortable entering the winter with storage below average” due to the much higher year/year (y/y) production (+8.3 Bcf/d in July), which is likely to continue to grow into year end 2018, analysts with Jefferies LLC said.

Meanwhile, Genscape Inc. said Lower 48 production closed July with a “solid recovery” from some late-month disruptions to lift the month’s final average to record highs. Its daily pipeline production estimate has July closing out at a daily average 80.27 Bcf/d. The month’s single-day high of 80.97 on July 4 established the all-time record. Its latest production forecast expects sustained growth through the summer and the rest of year, with the summer-on-summer surplus expected to further widen.

Furthermore, there have been some recent infrastructure additions on the demand side of the ledger which have helped to counter production growth, analysts at Houston-based Mobius Risk Group said. In addition, based on public commentary from producers, there could be less prolific supply growth in the latter half of the year.

Already, there are signs in the Permian Basin that natural gas infrastructure may be running near capacity. Gas production climbed from 6.4 Bcf/d at year-end 2017 to 7.2 Bcf/d in March 2018, “but production has been roughly flat at this level for five months,” Jefferies said.

For the week ending Aug. 1, the U.S. overall rig count grew by 1 rig to 1,142, according to DrillingInfo. The number of rigs reported grew most in the Powder River Basin of Wyoming, which saw an increase of four rigs, while the Eagle Ford and Haynesville shales each saw 2 rigs added. The Marcellus/Utica was down 1 rig during the period, as was the Denver-Julesburg Basin. In the Permian, the rig count stayed flat at 459 rigs.

The United States continues to add rigs, although at a slower pace, DrillingInfo said. During the first half of 2018, 132 were added, compared to 318 during the same time frame in 2017. February and April of this year have reported the largest monthly additions with 47 and 31, respectively.

The same is true in the Permian, DrillingInfo Manager of Energy Analysis Maria Sanchez said. Since January, the Permian has seen 67 rigs added, although only 3 rigs were added in June and 7 rigs in July. “We definitely see signs that production is flat to declining,” Sanchez said. She noted that while producers continue to ramp up crude oil production in the basin because of trucking options, “gas doesn’t have that option.”

A Nabors Industries’ survey of its larger Lower 48 customers, however, shows no slowdown in overall drilling activity in the months ahead, with half planning to add rigs during the remainder of the year, and only customer planning to drop a rig. The operators included in the survey account for roughly one-third of the Lower 48 land rig count.

“The narrative this year has been focused on excessive associated gas production plus backhauled Appalachian production, and the subsequent glut of southern U.S. supply. However, current inventory levels and the fact that the y/y storage deficit in this region has not materially changed in the past six weeks suggests natural gas demand is not to be ignored,” Mobius analysts said.

Turning to the spot gas markets, prices were higher nearly across the board, likely on follow-through from futures action. In Appalachia, where Dominion South picked up a couple of pennies to set a fresh 30-day high of $2.55. Texas Eastern M-2 30 Receipt next-day gas tacked on a nickel to reach $2.59, also a 30-day high.

Over in West Texas/southeastern New Mexico, next-day gas at Waha climbed 14 cents to $2.37 and El Paso-Permian jumped 16 cents to $2.32. The gains seen in the supply basin, however, are likely more reflective of the overall strength in the cash market, rather than in response to the line rupture that occurred Wednesday on the El Paso Natural Gas system (EPNG).

Kinder Morgan on Wednesday declared a force majeure on EPNG’ Line 3130 following a “third-party incident” in a rural area in Midland County, TX. An investigation is underway to determine the cause of the 12-inch pipeline failure, and “preliminary indications are that a third-party pipeline located in close proximity to the EPNG line failed before the EPNG line failure,” the company said.

Meanwhile, the impact on flows was minimal, as Genscape reported that the two affected points on the line averaged just 6 MMcf/d in July. The line will be returned to service as soon as possible, Kinder Morgan said. 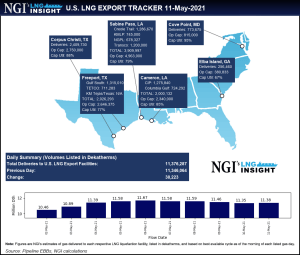