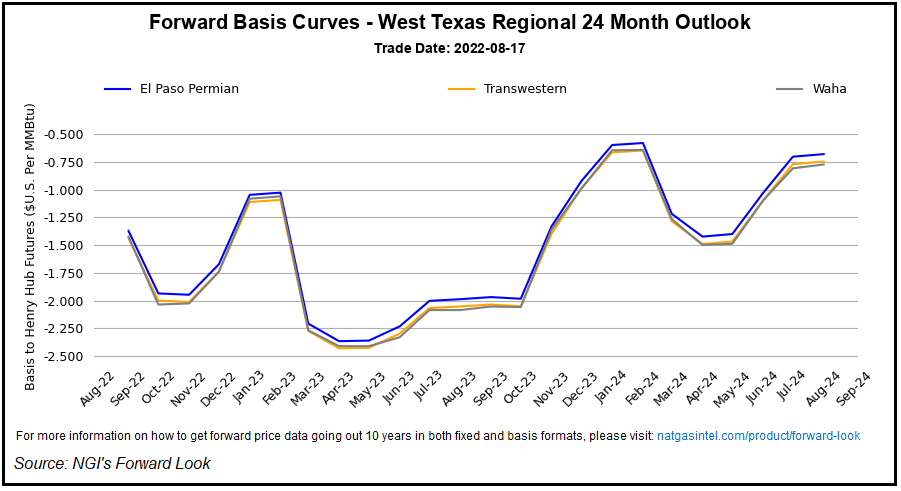 Fixed prices for September delivery at benchmark Henry Hub surged $1.042 during the period to $9.245/MMBtu, setting the pace for hefty markups across the Lower 48.

Still, with the focus shifting away from summer cooling demand as the shoulder season approaches, double-digit regional basis discounts were the norm for the period.

Higher Ceiling for Henry This Winter?

The gains have occurred despite a deteriorating weather-driven demand outlook, suggesting the market’s focus has shifted to pricing in supply risks for the upcoming winter, according to analysts. The bullish case for the months ahead centers around a thin domestic inventory margin, set against a backdrop of overseas energy scarcity amid Russia’s invasion of Ukraine.

TTF “has continued to catch a bid to eye-watering levels despite having closed the gap to the five-year average on inventories,” the TPH analysts said.

The analysts said they see “limited risk on our base case to the U.S. running out of storage this winter on normal weather.” However, “a higher TTF price presents a higher potential ceiling to Henry Hub should Old Man Winter show up in the Lower 48.”

Where the market goes from here will depend in part on the timing of the 2 Bcf/d Freeport LNG terminal’s return to service, and also on domestic production trends, according to the TPH analysts.

Meanwhile, “comfortable temperatures will be the rule over much of the interior U.S. the next couple of weeks with highs of 60s to 80s,” according to NatGasWeather. This will hold weather-driven demand to “seasonable levels” nationally.

But a seemingly tame temperature outlook for the waning days of summer did not prevent what NatGasWeather characterized as “pure chaos” following a “quite bullish” storage report from the Energy Information Administration (EIA) Thursday.

An 18 Bcf injection into U.S. storage for the week ended Aug. 12 fell notably shy of pre-report expectations, and the initial market reaction sent prices on the September contract as high as $9.663. However, a volatile session saw the front month dip back below $9.00 midday before eventually going on to settle a modest 5.6 cents lower at $9.188.

“It seemed this was the data point that would finally take us to $10.00, but it was not to be, as the rally quickly met mass selling pressure yet again, just as has been the case every time we have moved over the $9.50 level,” NatGasWeather observed. “This marked the fourth week in a row that the directional miss of the EIA numbers was faded by the market, though this one, in our view, is the most surprising.”

The supply/demand balance implied by the latest EIA print is “wicked tight” and would put the market on pace for an end-of-season storage level below 3.3 Tcf, according to the firm.

Concern appears to be growing in the market over the adequacy of the potential end-October carryout “in the event that we actually get a cold winter, especially if Freeport is back online come October,” NatGasWeather said. “We agree with that general sentiment, which is why we characterize the overall backdrop as bullish, but as days like today show, moves can be very erratic, with strong pullbacks even in the general uptrend.”

Even as the milder weather should see injections begin to cut into the year-on-five-year storage deficit, price action suggests the market has “ignored” the fading cooling demand advertised in forecasts over the past two weeks, EBW Analytics Group analyst Eli Rubin told clients Thursday.

“Hurricane risks, which lean bearish, are also on the rise into September,” Rubin said. “If gas prices can clear $10/MMBtu, however, it could open the door for another leg higher. In our view, this scenario is likely — but not until the fall.”

While still well shy of the psychological $10 threshold, Nymex futures closed out the week on a bullish note, with the September contract rallying 14.8 cents to settle at $9.336 Friday.

The U.S. rig count hit a new year-to-date high of 855 during the week ended Aug. 18, according to the latest Enverus Drillinginfo Rig Count. That reflects a 1% sequential increase and is up 46% from year-earlier activity levels.

Looking at peak numbers by region during the period, the Permian Basin tally climbed to 323 rigs as of Tuesday, besting the previous week’s high by eight rigs, Enverus said.

“Appalachia also notched a four-rig increase to 58 during the last week,” according to the firm.

In Appalachia, Eastern Gas South September basis skidded 21.8 cents lower to finish at a $1.374 discount to the national benchmark.