Natural gas forwards markets wiped out last week’s gains, plunging some 16 cents on average between Oct. 14 and 20, as the market continues to wait for cold weather to arrive and grapples with record storage inventories. 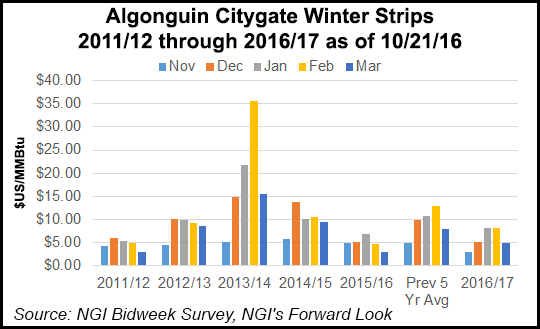 Unlike last week, when double-digit price increases were seen through the winter 2017-2018 strip, this week’s losses were concentrated at the front of the curve. In fact, small gains continued to be seen in packages beyond the current winter.

On a national level, December forward prices fell an average 10 cents, while the balance of winter (December-March) slid an average 7 cents, according to NGI Forward Look. The rest of the forward curve picked up a few pennies on average.

Nymex futures behaved similarly as the November futures contract tumbled 14 cents from Oct. 14 to 20 to reach $3.14, December futures dropped 7 cents to $3.43 and the balance of winter slipped 6 cents to $3.53.

While November futures remain at an 18-cent premium over where they began the prompt-month position, analysts see this week’s slide as perhaps the start of an overdue correction in the market.

Societe Generale’s Breanne Dougherty said the rally in the November futures contract earlier this month has likely been weighted more toward technical trading and short-covering rather than to market sentiment to fundamental news. “There has clearly been a more material response to slightly bullish data points than there has been to the overarching bearish pressure that should still be there due to the record level storage position,” said Dougherty, a commodities research analyst.

It is also very interesting that the front month has been trading consistently at a premium to cash, which implies a bullish sentiment on November-driven demand strength that will be more R/C weighted than power generation, she said. “We are concerned that too much upside has been brought into the price too early given the fact that November is an injection/withdrawal transition,” Dougherty said. Indeed, the November strength has occurred as natural gas storage inventories are at record levels and generally warm weather has limited gas demand.

On Thursday, the U.S. Energy Information Administration reported a 77 Bcf injection into storage stocks for the week ending Oct. 14. The build was slightly above market estimates, but below both last year and the five-year average. Gas inventories are now 46 Bcf higher than year-ago levels and 185 Bcf above the five-year average.

This storage trajectory still points to a record level through end of October 2016, Dougherty said. Therefore, she sees the risk of downside price pressure holding until the storage surplus to last year transitions into a deficit, which Societe Generale sees happening in late November. “The later that transition happens, the more downside price risk grows,” Dougherty said.

The team at NatGasWeather said the last full week of October could bring about increased volatility as December struggles to find a fair market price after much of November’s recent gains have been erased.

NGI’s Patrick Rau, director of strategy and market research, said the December price will be driven largely by how November shapes up weather-wise, but more importantly, what weather forecasts for December are shaping up to be around Thanksgiving.

“We know there will be plenty of gas in storage when Nov. 1hits, so that puts all the more pressure for there to be more degree days in November and December,” Rau said. “Winter demand usually peaks around the middle of January, so getting off to a good start consumption-wise in November and December in the face of historically high storage levels is crucial.”

But if the November contract fails to significantly reduce in the coming week, the stage could be set for bearish risk being pushed to the December contract, which could very well overreact to any sort of bearish-seeming data that could very likely emerge through the end of October and November, Dougherty said. “For example, a rise of domestic production once Northeast basis pressure lessens (courtesy of the rise in regional heating loads and pipeline debottlenecking); and/or any delay in rising R/C loads due to moderate weather,” she said.

If current weather outlooks are any indication, the delay in rising R/C loads due to moderate weather is a strong possibility as weather models are struggling to show any truly cold air in the U.S. for at least the next couple of weeks.

The team at Bespoke Weather Services said the latest models have trended warmer for the 10- to 14-day period as significant ridging is seen across the center of the country. “This will continue to limit heating demand, with only lingering cold weather across the East Coast keeping demand close to average there,” Bespoke said.

In addition, any cool trends in weather data that may hold for next week and beyond may not be enough to satisfy what appears to be an impatient market, NatGasWeather said. “It will be worth watching to see if there’s additional selling pressure on Dec ’16 as prices could continue to drop toward where Nov ’16 recently traded before the past week’s sell-off, much like what happened when contracts rolled over late last month,” the weather agency said.

Meanwhile, the market will undoubtedly be watching the Baker Hughes rig report, which last week showed a sharp increase in gas rigs last week. Indeed, the shape of the forward curve is hinged on production outlooks for the remainder of the year and 2017. “The more we get a sense for how aggressive capex plans for various producers are going to be for 2017, which we should learn during the next two weeks of earnings calls, the more we’ll know just how sizable the production outlook looks for next year,” NGI’s Rau said.

This week, Southwestern Energy, one of the top five U.S. gas producers, gave some early clues to its 2017 activity. While the company said it would not release formal capex guidance until February, the five rigs it is currently running, and plans to run into next year, would increase its spending year-over-year by a significant amount, Rau said.

The company, which also did not pinpoint a production target for next year, said it expects to generate in excess of $1 billion in cash flow in 2017, and would need to spend $700 million in maintenance capital just to keep 2017 production flat versus its 2016 level, he said.

“Assuming Southwestern spends within cash flow, that right there is a capex range of $700 million-$1 billion. The company has spent only around $400 million or so through the first nine months of 2016. Needless to say, a ramp in their activity next year is definitely in the cards,” Rau said.

Taking a deeper dive into the forward curves, Northeast markets put up substantially heftier decreases across the front half of the curve, but also for winter strips well beyond the current winter. Some of the most pronounced weakness was seen in New England, where the Algonquin Gas Transmission city-gates November forward price plummeted 42.5 cents between Oct. 14 and 20 to reach $2.90, according to Forward Look.

AGT December forward prices slid 29.7 cents during that time to $1.79, while the balance of winter dropped 22 cents to $6.62. The next two winter packages also fell about 20 cents. The sell-off at AGT comes as the pipeline on Wednesday submitted a request to FERC to place most of the AIM project facilities — 245 MMcf/d of a total 342 MMcf/d — into service.

Algonquin did not specify a date when the facilities would be placed into service, nor did it say when the remaining facilities would be brought online. The AIM project is expected to ease some of the volatility seen in New England during the cold winter months. After Thursday’s close, AGT’s balance of winter (December-March) strip sat at a $3.09 premium over Henry Hub. The winter 2017-2018 strip was at a $2.46 premium to Henry Hub and the winter 2018-2019 strip was at a $2.50 premium.

The steep losses in New England were also seen in other areas of the Northeast. Tennessee zone 6 200 leg, November forwards plunged 44.3 cents between Oct. 14 and 20 to reach $2.68, December slid 36 cents to $5.14 and the balance of winter dropped 23 cents to $6.54, Forward Look data shows. Like AGT, the next two winter forward packages at Tenn. zone 6 200 leg also tumbled about 20 cents. 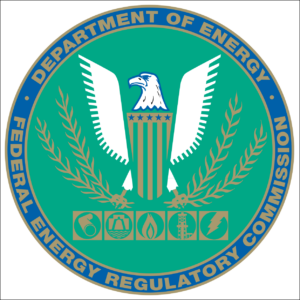 The Government Accountability Office (GAO) has advocated for the use of natural gas pipeline operator reports and other information in helping FERC identify, assess and respond to risks to reliability. GAO was tapped by Sen. Jack Reed (D-RI), who is a ranking member of the Subcommittee on Transportation, Housing and Urban Development, and Sen. Sheldon…