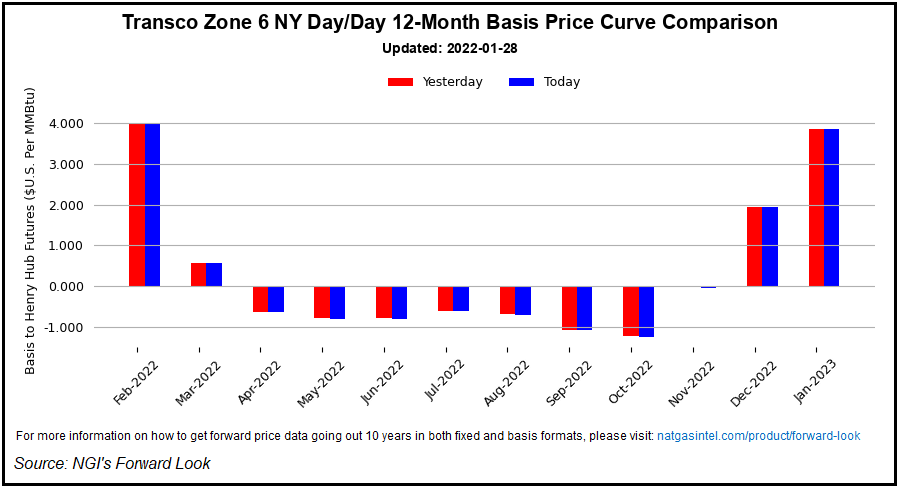 NGI’s Spot Gas National Avg. gained $1.395 to $7.710 on Friday amid expectations for a fierce winter storm to blanket the East Coast over the weekend with heavy snowfall and frigid air.

A day earlier, the February futures contract soared nearly $2 to $6.265, setting a 2022 peak before rolling off the books at the close of Thursday’s trading.

February approached the front month seven-year high of $6.466 reached last October. Analysts at The Schork report called it an “historic rally,” noting that from trough to peak in intraday trading, February futures soared more than 70%.

The contract topped $7.00 late in the Thursday session as an abundance of short positions were late to exit, causing a short squeeze that ignited the price spike. Such a squeeze occurs when traders who bet on falling prices switch gears and buy in earnest in order to avoid greater losses.

The final February settlement was “one for the record books, with the 46.5% day-over-day gain the highest ever,” EBW Analytics Group senior analyst Eli Rubin said. “No other trading day within the past decade featured a move even half as large. The spike higher carries all the hallmarks of a short squeeze, with traders short into expiry forced to buy gas at any cost to cover their obligations.”

Bespoke Weather Services said the “epic squeeze” would “go down as one of the wildest contract expirations in natural gas history, if not the wildest.” The firm said “fears” about looming winter freezes that could drive robust heating demand, interrupt production and necessitate steep drawdowns of gas from storage fueled the panic buying and continued to support the March contract on Friday.

Following expected bouts of severe cold over the weekend and into early next week in the East, Bespoke said, forecasts called for a chilly start to February. “What we see of the opening third of February looks quite cold in all of the major guidance.”

Should the depths of winter extend well into next month, “the pull on storage would, of course, remain quite strong, putting us at real risk to draw down to 1.2 Tcf by the end of the season,” Bespoke added. “Such a trajectory would then make it much more difficult to get stocks to acceptable levels heading into next winter.” As such, “we could continue advancing higher until we price out enough demand or ensure that prices will stimulate solid production gains.”

On Friday – and through the past week – production held below 94 Bcf, or roughly 3 Bcf lower than 2021 highs. Harsh weather in January caused widespread freeze-offs that curtailed output.

The U.S. Energy Information Administration (EIA) on Thursday reported a withdrawal of 219 Bcf natural gas from storage for the week ended Jan. 21. The draw eclipsed all others so far this winter season – and easily surpassed historical averages.

Analysts expect more to come. Bespoke, for one, preliminarily projected a draw of 275 Bcf with the next EIA print, citing both strong demand and modest production.

Analysts at Tudor, Pickering, Holt & Co. (TPH) estimated that residential/commercial demand has increased by 50% through January to an estimated 50.4 Bcf/d.

“On the supply front, certain data continues to suggest around 2 Bcf/d of lighter supply in the Northeast as cold weather persists, while maintenance in the Gulf of Mexico and lighter supplies in the Permian Basin have kept volumes in the roughly 93 Bcf/d range — below our modeling as we’ve progressed through January,” the TPH analysts said.

Europe, in particular, is precariously light on gas supplies midway through winter. The continent imports roughly two-thirds of its natural gas, and it relies on Russia for the bulk of that. However, Russian flows to Europe are lacking this year amid intensifying geopolitical tensions. Russian aggressions against Ukraine that have put the two countries on the brink of war galvanized U.S. and European leaders to push back against Russia with sanctions, as well as regulatory delays of a new gas pipeline.

A German regulator late in 2021 indefinitely suspended its certification of the recently completed Nord Stream 2 (NS2) pipeline, which was slated to begin transporting additional natural gas from Russia to Europe by mid-winter. Absent full Russian supplies, Germany and other countries throughout Europe are clamoring for U.S. gas.

Goldman Sachs analyst Samantha Dart noted the creation this month of an NS2 German subsidiary, a required step for the pipeline to eventually win regulatory approval. However, while European regulators “are incentivized to expedite the process to the extent possible to help normalize inventories on the continent,” Dart said, NS2 is still not likely to initiate operations before summer.

Next-day cash prices rallied Friday along with futures as a sprawling storm approached the East Coast, threatening dangerous wind chills and several inches of snow along a trek including New York City and Boston.

National demand was strong Friday throughout most of the Lower 48 and was forecast to prove robust through the weekend as weather systems across the Midwest pushed to the East, delivering subzero lows in some areas and more than a foot of snow in others.

Still, prices in the East led the charge ahead of what was expected to be a menacing weekend storm.

Residents throughout the Mid-Atlantic and New England were warned Friday of a Nor’easter moving along the Eastern Seaboard Friday night into Saturday. AccuWeather forecasters said the storm could dump more than three feet of snow and drive up to 90 mph winds, causing severe blizzard conditions in Greater Boston and neighboring markets.

“This is going to be a dangerous, life-threatening storm, especially in southern New England,” AccuWeather chief meteorologist Jon Porter said.

“Bands of heavy snow will develop in eastern New England during the heart of the storm that can produce two-to-four inches of snow per hour — extremely intense snowfall rates,” Porter said Friday. “Travel is likely to be nearly impossible in parts of southeastern New England on Saturday and Saturday night.”

Similar conditions were forecast for the immediate coasts of New Jersey, southern Delaware and eastern Maryland, according to AccuWeather.