A reversion back to the warm weather pattern that has dominated most of the winter sank March natural gas prices a little more as it rolled off the board. The March Nymex gas futures contract slipped 2.5 cents, expiring at $2.854. The incoming prompt April contract fell a steeper 6.2 cents to $2.795. 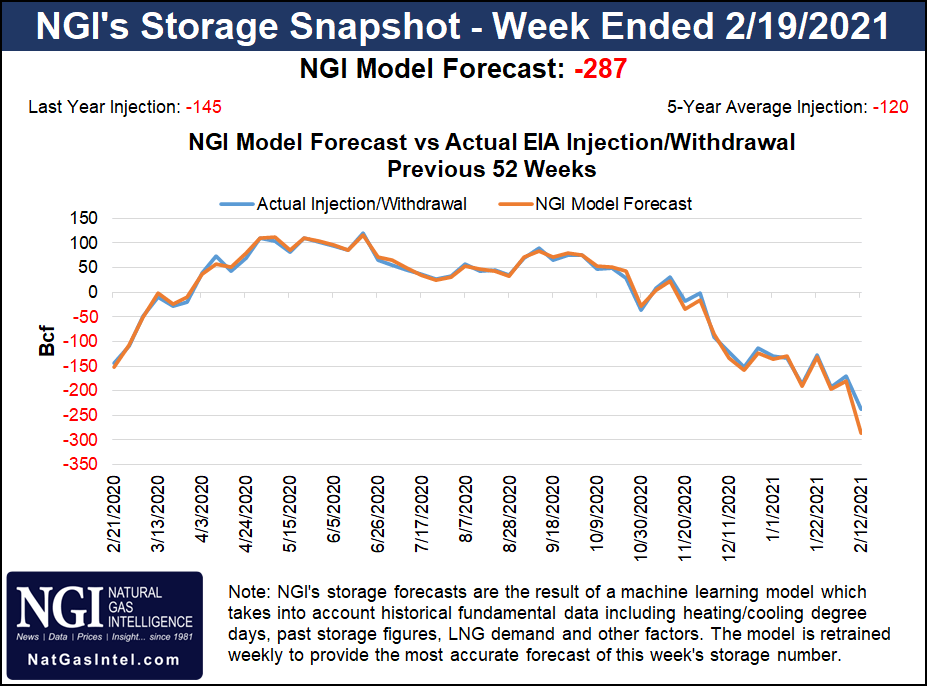 For all the hype about volatility in the March contract ahead of its expiration, price action actually quieted down Wednesday. The prompt month traded in a fairly narrow band amid low volume. Only about 6,600 March contracts were traded on Wednesday, compared with more than 111,000 April contracts.

That’s likely because traders have already closed the book on winter. Weather models continue to show mostly a warm pattern for March, with only brief bouts of cold on the radar. Any periods of chilly air are expected to be brief, and not nearly as extreme as last week’s Arctic blast.

Meanwhile, production continued to recover, although it is still below normal daily volumes from before last week’s record freeze-offs. In the Permian Basin, production is nearing 11 Bcf, still down from the 12.4 Bcf/d high before the cold air started moving into the region but far above the 3.8 Bcf low seen last Tuesday (Feb. 16).

However, downside price risk may be limited.

Liquefied natural gas (LNG) demand continued to recover, and on Wednesday feed gas volumes had crossed back above 10 Bcf. A backlog of empty LNG vessels in the Gulf of Mexico had been growing since Friday, but appeared to be leveling off as the week got underway.

Meanwhile, the market is expected to get the first glimpse of the implications of the prolonged polar blast on stockpiles when the Energy Information Administration (EIA) releases its weekly storage inventory report, scheduled for 10:30 a.m. ET Thursday.

Early estimates are wide ranging, reflecting the difficulty in assessing the widespread power outages that impacted gas production, pipelines, plants, storage facilities and other infrastructure. Analysts also have to factor in the reduction in gas flowing outside of Texas, as ordered by Gov. Greg Abbott in an attempt to help restore power to the state grid. It’s also worth mentioning that the EIA South Central region already is tough to gauge given the lack of transparency in nonregulated intrastate pipeline flow data.

A Bloomberg survey of eight analysts produced estimates ranging from a draw as low as 301 Bcf to one as steep as 350 Bcf, with a median pull of 334 Bcf. A Wall Street Journal poll had a tighter range of predictions, with an average draw of 334 Bcf. NGI’s model projected a much smaller draw of 287 Bcf.

EBW Analytics Group, which pegged the withdrawal at 344 Bcf, said a draw anywhere in the 300 Bcf range would be enough to erase the surplus to the five-year average and create a deficit of 125-175 Bcf. Even if the draw disappoints the market, as the EIA data did last week, “February 2021 is likely to verify 5.0 Bcf/d more bullish than any February on record, highlighting the significantly undersupplied natural gas market,” EBW said.

“With the deficit likely to grow quickly in March, support near $2.77 could prove difficult to break.”

Goldman Sachs Research analysts said despite the unprecedented shock to the energy industry brought on by the winter storm, February supply/demand balances only tightened by 2.2 Bcf/d. Analysts pointed out that the nearly 6 Bcf/d of production disruptions were mostly offset by higher Canadian imports, lower feed gas demand and a softer (storage-implied) balancing term.

“The impact on our longer-term U.S. gas balance is, in fact, negligible given the combination of warmer weather forecasts for March, and upward revisions to our supply estimates,” said the Goldman team.

Analysts expect end-October storage to be “well below comfortable levels” under current market forward prices and, hence, they maintain the constructive Nymex gas view for this summer at $3.25, which is above current forwards at $3.02.

“While we maintain our $2.75/MMBtu 2021/22 winter price forecast, below current forwards at $3.20, we see risks to our forecast skewed to the upside, especially if the rally in summer gas prices is delayed,” Goldman analysts said. “Specifically, should U.S. gas prices follow the current forward curve through October, we estimate 2021/22 winter gas prices would need to rally to at least $4/MMBtu to take end-March 2022 storage to more comfortable levels, above 1,500 Bcf.”

The Further They Fall

Cash markets everywhere but the East Coast and in West Texas posted decreases during Wednesday trading as demand is expected to remain light until the end of the week. Even then, only a modest, brief increase in demand is projected before more mild conditions return.

NatGasWeather said weather models are forecasting another modest bump in demand by the middle of next week — before yet another bearish pattern sets up March 4-9. The Global Forecast System was still a little colder than the European model for Monday through Wednesday (March 1-3) by advancing a cold front out of Canada more aggressively into the northern United States. The European model reflected only a glancing shot of cold air.

“Either way, the coming pattern isn’t as cold as needed to intimidate with national daily heating degree days below normal most of the next 15 days,” NatGasWeather said. “But what makes the pattern most bearish is a warmer-than-normal ridge expected to rule most of the U.S. March 5-9, with highs of 40s to 60s across the northern U.S. and highs of 60s to lower 80s across the southern U.S.”

The firm said the latest weather doesn’t show the mild pattern ending until March 10-12 at the earliest. As such, the back end of the 15-day outlook is to remain warm/bearish biased until the weather data shows better potential for subfreezing air returning to the northern United States.

As for price action on Wednesday, a pipeline issue on a major Permian Basin conduit likely influenced trading in the basin. Wood Mackenzie said a force majeure on El Paso Natural Gas (EPNG) set to take effect Thursday would cut upward of 300 MMcf/d of Permian outflow.

EPNG on Tuesday said an anomaly on Line 1103 would require isolation for testing, reducing throughput capacity at the “CORN LPW” and “GUADLUP” flow meters.

“The required operational capacities will translate to a cut of roughly 300 MMcf/d at CORN LPW, one of the Cornudas flow meters, based on recent 30-day averages,” Wood Mackenzie analyst Joseph Bernardi said. “These averages, though, are lower than normal due to both the supply shortfall during last week’s cold weather event and to a nearly identical force majeure cut at the end of January.”

During last month’s cut, there was no significant movement at either downstream SoCal Border or upstream Waha, according to the analyst. That flow cut lasted for three days, while this one is planned to last two, with EPNG expecting to return capacities to normal on Saturday.

“Worth noting, as well, is the fact that the flows came in about 125 MMcf/d higher than the restricted operating capacity levels during last month’s event,” Bernardi said.

Great Lakes Dredge & Dock Co. LLC has been tapped to construct the third phase of a landmark expansion of the Port of Corpus Christi Ship Channel in South Texas. The U.S. Army Corps of Engineers awarded a $139 million contract to the dredging service provider, which is tasked with extending the ship channel west…