Natural gas forward prices for March fell an average 13 cents between Feb. 2 and 8 as only brief periods of cold weather in the forecast were no match for record production, according to NGI’s Forward Look. 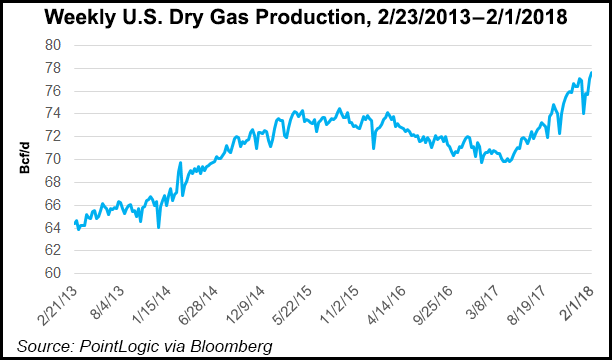 With the clock winding down on the winter season, market bulls have had little to hang their hats on as the latest weather guidance shows an overall milder trend across much of the United States in the weeks ahead.

“There’s still expected to be numerous weather systems tracking across the northern U.S. with bouts of cooling, but with the southern half of the country and up the East Coast continuing to look rather mild with strong high pressure dominating,” NatGasWeather said.

As such, the forecaster said demand would be moderate over the northern United States through Feb. 20, but soft over the southern part of the country as highs of 50s-70s become widespread. The data overnight Thursday painted an even warmer scenario over the eastern United States from Feb. 21-25 “in a rather bearish set-up,” despite being colder over the West, it said.

Not even strong exports were enough to hold up prices. As of Thursday (Feb. 8), power burns were reported to be 23.4 Bcf, while exports remained near record highs, with liquefied natural gas exports at 3.2 Bcf and pipeline exports to Mexico at 4.6 Bcf.

Meanwhile, traders will continue to keep an eyes on storage inventories in the weeks ahead as the coldest months of the winter season are fading quickly. The U.S. Energy Information Administration (EIA) reported a a 119 Bcf withdrawal from U.S. gas stocks for the week ending Feb. 2, versus a year-ago withdrawal of 142 Bcf and a five-year average pull of 151 Bcf.

Despite the storage pull coming in slightly greater than market expectations, the Nymex front month barely budged, slipping only a half-cent to $2.697.

“Storage draws have been very healthy thus far this year, but the market remains sceptical it seems based on the front-month now trading below the $2.75/MMBtu level,” Societe Generale (SocGen) analysts said Thursday in a note to clients.

Data and analytics company Genscape Inc. said the market is simply not concerned with the ability to refill storage with all the anticipated production growth projected to hit now through summer. In fact, the Louisville, KY-based company’s analysts have been grappling with “trying to figure out how the market absorbs the quantity of production economically priced to flow” in calendar 2018.

Genscape’s team continues to see an “intensification of gas-on-gas competition,” with a squeeze of volumes towards the middle of the continent, leading the group to believe that one or some of the producing regions is going to have to blink and choke back volumes.

Thursday, WTI closed at $60.51, about 15 cents above the 52-week range, Genscape noted, but it is not quite clear how much of the drop is affected by crude oil fundamentals versus correlations to the stock market declines and increased bond yield reports of recent days.

On the fundamentals side, crude production is believed to have crested the 10 million b/d mark recently, inventories are rebuilding and several notable transportation disruptions in the United States, Canada and Europe appear to be resolved.

“Should the WTI price retreat become sustained, though, there will be a reduction in forecast volumes of associated gas production for the summer, potentially alleviating (but far from eliminating) the tight gas-on-gas competition that is setting up,” Genscape said.

In the more immediate term, NatGasWeather said that while the latest weather models trended milder, “it won’t take as much cold air going forward to meet five-year average storage withdrawals, so any decent sustained cold snaps will again increase deficits.”

Analysts with Wells Fargo Securities LLC said Thursday they expect a cumulative 258 Bcf withdrawal over the next two weeks based on their model and current forecasts from the National Oceanic and Atmospheric Administration.

SocGen analysts noted that while the year got off to a strong start, the winter can be precarious from both a supply and demand perspective. “Cold temperatures have driven up demand aggressively in some weeks, but the lack of consistency has troubled the market.”

To be sure, the research group is also focusing on the “pockets of warmth on the horizon”, but said forecasts have been inconsistent. “Furthermore, winter is getting nearer its end with every passing day,” analysts said. Still, SocGen maintains its end-of-March storage expectation of 1.5 Tcf.

“We see a 1.5 Tcf end of season finish as neutral, leaving the focus on summer production growth, which will drive the injection pace,” analysts said.

Exports have been solid, and power generation in general has performed well, so demand is expected to show good year-on-year growth this summer. Production growth thus has to toutpace that demand growth in order to get end-of-October storage to a level comfortable to start the winter 2018-2019, they said.

That shouldn’t be a problem, though, as SocGen analysts expect to see production growing through 2018, bringing the market back to equilibrium and allowing for even a shift back into a period of structural oversupply, under a normal weather scenario. “Our storage levels in 2019 are currently looking healthy, hence our view of downside price pressure emerging as the market moves into that time period,” analysts said.

Indeed, a look at the Nymex futures curve shows the largest sell-off in prices occurring at the front of the curve for the Feb. 2-8 period, but moderate losses continuing through the winter 2018-2019.

As in past weeks, Northeast pricing hubs posted the steepest losses across the country as demand in the region is expected to be moderate at best in the weeks ahead.

Several points along the Transcontinental Gas Pipeline (Transco) posted similarly steep losses at the front of the curve and in next winter’s strip. Transco zone 6 New York March forward prices dropped 34 cents from Feb. 2 to 8 to reach $3.476, while the winter 2018-2019 package fell 14 cents to $4.93.

While much of the country followed the lead of falling Nymex futures, there were a handful of pricing points that ended the Feb. 2-8 period in the black. What’s even more interesting, however, is that it is these pricing hubs that have become increasingly discounted to the benchmark Henry Hub over the course of the last year — and more noticeably in the last couple of months.

Genscape analyst Eric Fell said the steep discounts that traders are beginning to notice at points in the Rockies and Midcontinent are nothing new. In fact, the discounts to the Henry Hub began widening over the course of 2017 as production in several regions — including the Permian, Rockies, Oklahoma and even Western Canada — began growing, but with not enough takeaway capacity to move that supply to market.

“You’ve got a lot of production growth from a lot of different areas, so this is not something you can look at in isolation,” Fell said.

Some pipelines already have been announced to help alleviate the abundant supply. Cheniere Energy Inc.-backed Midship Pipeline Co. LLC is developing a 1.4 Bcf/d pipeline connecting gas production from the Anadarko Basin in Oklahoma to growing Gulf Coast and Southeast markets via deliveries to existing pipelines. The 199.4-mile project is expected to be in service by early 2019.

Pipelines coming online in Mexico will also help alleviate some of the problem, Fell said.

Part of the reason some market players have taken notice of the widening spread in recent months is because Henry Hub prices were particularly strong in January, so the differentials between the benchmark and other points in the Midcontinent and Rockies were even more pronounced.

The spread is going to be more pronounced during times of high demand, Fell said. “That’s what you would expect. But don’t be fooled that it’s just because the hub was strong. This has been building.”