More than 40 million acres in the Gulf of Mexico (GOM), with oil and natural gas leaseholds offered in the Central and Eastern planning areas, are going to be auctioned on March 19 in New Orleans, said the U.S. Department of Interior. 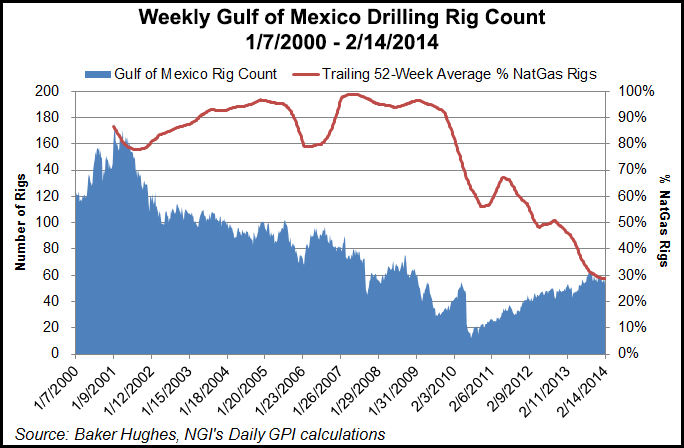 Lease Sale 231 in the Central Planning Area and Lease Sale 225 in the Eastern Planning Area are to be held consecutively. Interior’s Bureau of Ocean Energy Management (BOEM) estimates the proposed sales together could result in production of close to 1 billion bbl of oil and 4 Tcf of natural gas.

“These lease sales underscore the President’s commitment to create jobs through the safe and responsible exploration and development of the nation’s domestic energy resources,” said Interior Secretary Sally Jewell. “The five-year program reflects this administration’s determination to facilitate the orderly development while protecting the human, marine and coastal environments, and ensuring a fair return to American taxpayers.”

The Eastern sale, which could result in production of 71 million bbl and 162 Bcf, encompasses 134 whole or partial unleased blocks covering about 465,200 acres. The blocks are at least 125 statute miles offshore in water depths from 2,657-10,213 feet (810-3,113 meters). The area is south of Eastern Alabama and Western Florida; the nearest point of land is 125 miles northwest in Louisiana.

The two sales mark the fourth and fifth offshore auctions under the Obama administration’s five-year Outer Continental Shelf (OCS) leasing program for 2012-2017. The lease sales build on the first three in the five-year program that to date has offered more than 79 million acres for development and garnered $1.4 billion in high bids.

“As a critical component of the nation’s energy portfolio, the Gulf holds vital energy resources that can continue to generate jobs and spur economic opportunities for Gulf producing states as well as further reduce the nation’s dependence on foreign oil,” said BOEM Director Tommy Beaudreau.

The GOM contributes about 20% of U.S. oil and 6% of gas production. The output provided the bulk of the $14.2 billion in mineral revenue disbursed to federal, state and American Indian accounts from onshore and offshore energy revenue collections in fiscal 2013, a 17% increase from fiscal 2012 disbursements of $12.15 billion.

The decision to hold the two sales follows “extensive environmental analysis, public comment and consideration of the best scientific information available,” BOEM noted. “The terms of the sales include stipulations to protect biologically sensitive resources, mitigate potential adverse effects on protected species and avoid potential conflicts associated with oil and gas development in the region.”

In addition to opening bids for the two separate sales, BOEM plans to open any pending bids submitted in Western Planning Area Sale 233 for blocks located or partially located within three statute miles of the maritime and OCS boundary with Mexico.

Any leases awarded as a result of the Western Planning Area bids would be subject to the terms of the U.S.-Mexico Transboundary Hydrocarbons Agreement, which was approved by Congress in the Bipartisan Budget Act of 2013 and recently signed by the President (see Daily GPI, Dec. 18, 2013).

The final notices of sale are published in the Federal Register. Terms and conditions for Eastern Sale 225 are explained in boem.gov/Sale-225; for Central Sale 231, details are at boem.gov/Sale-231.