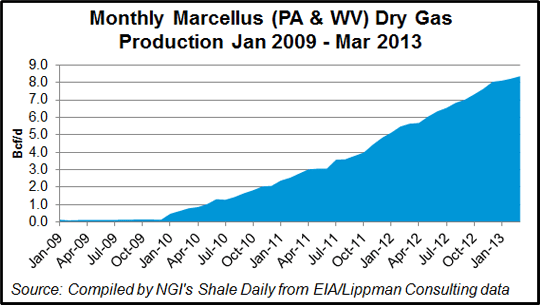 “The ramp-up in both capacity and volumes has exceeded what we’ve talked about previously as guidance of 12-18 months to build and 12-18 months to fill,” he told analysts during a quarterly conference call.

Dry gas production from the Marcellus has skyrocketed over the last few years, from 1 Bcf/d in May 2010 to 8.4 Bcf/d in March 2013, according to Energy Information Administration data.

The challenges have been acknowledged recently by natural gas operators, which have complained about constraints in the Marcellus on a lack of takeaway capacity, which has left hundreds of wells awaiting completion.

However, since January, four processing facilities in the Marcellus and the Utica have been completed with a combined capacity of 645 MMcf/d, said Semple. “In order to support the success of our producer customers, we expect to complete 18 major projects and over 500 miles of gathering pipeline by the end of next year.”

At the MarkWest Liberty facilities, which serve Marcellus operators in five locations of Pennsylvania and West Virginia, gas volumes jumped 110% year/year in 1Q2013 and were nearly 20% higher sequentially.

“We now have over 1.5 Bcf/d of total processing capacity…with our high-quality, diverse set of customers,” which include some of the biggest operators in the Marcellus,” said Semple. The Houston processing and fractionation complex in Washington County, PA, is operating “355 MMcf/d of processing capacity and we are developing another 200 MMcf/d plant” to support Range Resources Corp.

The Majorsville complex in Marshall County, WV, recently started up a third processing plant; before expanded operations, it was operating at near 90% capacity, he said. “The third plant brings our total capacity at the complex to 470 MMcf/d. By the end of this year, we will complete a fourth plant in Majorsville, increasing our capacity to 670 MMcf/d. In order to further support the growing production” from producers, “we are installing two additional plants that will create the first processing complex in the Northeast with more than 1 Bcf/d of capacity.”

The Mobley complex in Wetzel County, WV, was at 60% of capacity just a few weeks after it was completed last December. “In February, we placed a second plant into operation, bringing our total capacity at Mobley to 320 MMcf/d. That complex has ramped up quickly, and is processing over 215 MMcf/d of rich gas from EQT, Magnum Hunter and other producers. We are quickly moving forward with the construction of a third plant, and by the end of this year, we will have installed 520 MMcf/d.”

Growth also is strong at the Sherwood complex in Doddridge County, WV, where MarkWest’s first 200 MMcf/d plant, which began operations lat October, “already is operating at capacity” on Antero Resources development. To support Antero’s growth, MarkWest early this month started up a second 200 MMcf/d processing plant, “and a third plant is scheduled to be completed during the fourth quarter of this year…

“As a result of our long-standing relationship with Antero, we also completed definitive agreements this quarter for the continued expansion of Sherwood. And by the second quarter of next year, we anticipate completing a fourth 200 MMcf/d plant. By the end of next year, Sherwood will be our second complex in the Marcellus with at least 800 MMcf/d of processing capacity.”

The Keystone complex in Butler County, PA, also is operating near capacity. By early next year, MarkWest plans to have more than 200 MMcf/d in capacity to support producer programs.

“In addition to our five large-scale processing complexes in the Northeast and our 60,000 b/d propane and heavier fractionation complex, we’re also developing critical ethane capacity,” said the CEO. “Over the next several months, we will complete the first large de-ethanization facility in the Northeast located at our Houston complex, which will allow us to produce purity ethane.

“Recovering ethane allows our producers to meet the residue gas quality specifications and over the long-term, provides them the ability to capture additional uplift from their rich gas production. We’re working closely with our producer customers to phase in additional ethane recovery facilities in order to meet their downstream pipeline commitments.”

This year MarkWest is “on track to double our volumes and to double our processing capacity to 2.2 Bcf/d” in the Marcellus. “And even this year, we are on track to complete another 1 Bcf/d of capacity, bringing the total to 3.2 Bcf/d.”

MarkWest also is developing a similar set of critical midstream operations in the Utica Shale with joint venture partner The Energy & Minerals Group (EMG) (see Shale Daily, Feb. 7). “Initial drilling results near our facilities have been very strong, and it appears that our fully integrated system will be located in the core of the liquids-rich area of the play,” Semple told analysts.

Over the past year, MarkWest has “executed agreements with six key Utica producers, completed 60 miles of gathering pipelines and began operations of two large gas plants. During the next 12 months, we will complete an additional 200 miles of gathering pipelines, spanning five counties, we’ll add 800 MMcf/d of processing capacity and commission our third world-class fractionation complex in the Northeast. And we are also in active discussions with additional Utica producers.”