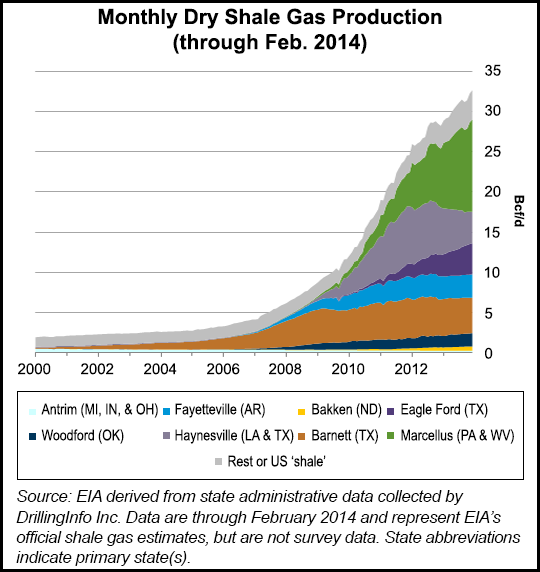 “Despite a slight downturn in the Marcellus rig count over the past year, output has grown as producers reduce drilling time and increase the production per well. The Utica — which was originally expected to have higher oil production — has had significant growth in gas production,” said Frank Brock, senior energy market specialist for ICF International. The firm just released its “ICForecast Strategic Natural Gas Outlook” for the second quarter.

The report highlights a significant increase in production in the Northeast United States from the Marcellus and Utica. In the Marcellus, increased drilling efficiencies and improved well stimulation techniques are driving production growth in spite of lower rig counts, ICF said.

According to Energy Information Administration (EIA) production data released Friday for February 2014, the 11.77 Bcf/d in dry gas production out of the Marcellus Shale was more than double the output of the Barnett Shale, which was the second largest dry gas-producing unconventional play tracked by the EIA. The Barnett posted output of 4.46 Bcf/d during the same month, EIA said.

In the Utica, producers are finding plenty of gas where once there was thought to be more oil.

ICF said the need to refill depleted storage after a brutal winter will support gas prices, which it expects to be firm through the end of the year, although somewhat lower than the current futures strip.

Prices could trend lower next year as production continues to grow and demand stays a step behind, ICF said. Further out, though, expect firmer prices from 2016 through 2020 as increased demand from new liquefied natural gas export projects, increased exports to Mexico and new industrial demand tighten the supply-demand balance, ICF said. On top of all that, stricter emissions regulations for power plants will continue to support a shift from coal-fired to gas-fueled generation.

Pipeline takeaway capacity out of Appalachia has been swamped with Marcellus gas for a while now, suppressing prices and keeping would-be producing wells waiting in the wings for connection to the grid. One recent estimate by Barclays says 1,300 wells that have been drilled are still awaiting completion in the region. But that’s not to say that the owners of legacy pipelines from the south to the north aren’t trying to up their game for the era of the Marcellus-Utica.

Prices at the Leidy Hub in Pennsylvania have been trading below the Henry Hub. “This winter, the Leidy spot price averaged $3.55/MMBtu, $1.08/MMBtu below Henry Hub and lower than the average spot price at any other major U.S. natural gas hub,” the EIA said Friday.

Pipeliners have noticed, and multiple projects have been proposed or are in the works to line up supplies with markets. Projects to move gas north into New York and New England have more recently been joined by proposals to move gas southward and to the Midwest.

Among the projects are:

“The uncertainty over the timing of new demand sources and the midstream infrastructure needed to bring new supplies to market create the potential for increased price volatility through the end of the decade,” Brock said.