The opening of the Mariner West I ethane pipeline and new processing plants should provide some relief to current wet gas constraints in the Marcellus and Utica shales, and the plays should be largely de-bottlenecked by the end of next year, according to analysts at Barclays. 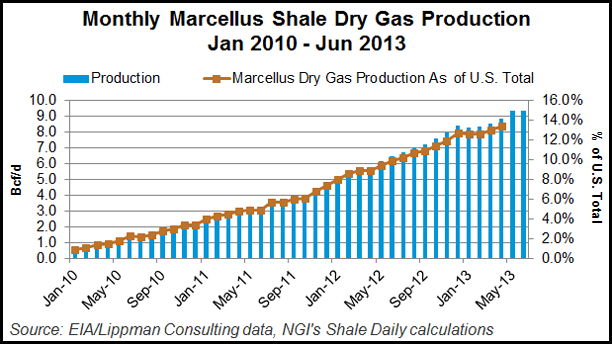 “After several years of relentless growth, gas from the Marcellus Shale play remains bottlenecked by infrastructure: in the Northeast, it is constrained by pipeline capacity to take the gas out to markets; in the Southwest, it is constrained by the ability to strip the NGLs [natural gas liquids] from the wet gas stream,” the analysts said in a note Wednesday.

Five natural gas processing plants have come online in the region in the last six months, eight others are expected to commence operations this year, and seven more are scheduled to begin in 2014. “Combined, the plants will bring 3.9 Bcf/d of processing capacity to the Marcellus/Utica region, opening the doors for a 3.5 Bcf/d increase in dry gas production by the end of next year,” Barclays said. Still, the growth of wet gas production in the area “will be paced not only by the capacity of upcoming processing facilities, but also by the ability of the region’s infrastructure to handle the resulting increase in ethane output.”

With no ethane outlets currently available to the area, ethane is being left in the gas stream. “This has, in the case of Texas Eastern Transmission Pipeline (Tetco), rendered the gas too ‘hot’ to meet pipeline specifications and dry gas from the Rockies Express [Pipeline (REX)] has recently been called on to ‘cool off’ the gas entering Tetco,” the Barclays analysts said. “If the upcoming processing plants were to be fully utilized while ethane continues to be rejected, an additional 120,000 b/d of ethane could be entering the region’s pipelines by the end of 2013, and a further 80,000 b/d by the end of 2014.”

Marcellus dry gas production makes up more than 13% of the U.S. total, according to Energy Information Administration/Lippman Consulting data. In June 2012 6.49 Bcf/d was coming out of the Marcellus; by last month that number had jumped to 9.32 Bcf/d.

The Mariner West ethane pipeline, helmed by MarkWest Energy Partners, is ramping up soon (see Shale Daily, Nov. 12, 2012). That pipeline may provide more ethane takeaway capacity, but there still would be low prices to contend with, “trading roughly on par per MMBtu with natural gas,” Wells Fargo Securities analysts said recently (see Shale Daily, July 22). Ethane recovery, they said, may not be economical until 2015-2016, when more projects come online, a forecast that matches comments two months ago by Williams CEO Alan Armstrong (see Shale Daily, May 9). REX has said it will become a bidirectional pipeline, making itself a 1.8 Bcf/d east to west “expressway to the markets” from the Marcellus and Utica shales (see Shale Daily, May 16).

The first phase of Mariner West is expected to begin transporting Marcellus ethane to Sarnia, ON, sometime in the next month, which “could be sufficient to alleviate the need for bringing Rockies Express gas to the Marcellus by the end of the year…and additional relief may come sooner with upcoming processing plants that connect to other trunk lines as they may allow for some wet gas flows to be re-routed away from the constrained Tetco segment,” Barclays said. Ethane-related constraints could persist until the start of the Mariner West II and Enterprise Products Partners LP’s planned Appalachia to Texas Express ethane pipeline next year, they said (see Shale Daily, Jan. 5, 2012).