Beginning Friday, New Jersey and New York customers on Williams’ Transcontinental Gas Pipe Line (Transco), for the first time on a large scale will have direct access to Marcellus Shale natural gas in their own backyards, thanks to the second phase of Transco’s Northeast Supply Link. 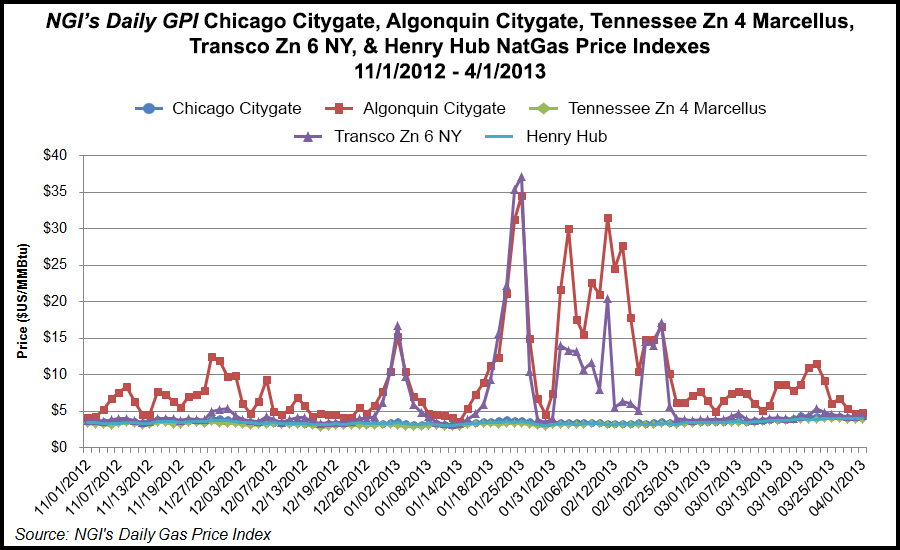 The second phase of the project is expected to enter service on Friday, adding 125,000 Dth/d of capacity to the first 125,000 Dth/d phase, which entered service in August (see Shale Daily, Aug. 16). The project is the first expansion of the Transco system designed specifically to connect Marcellus supplies with New Jersey and New York, Williams spokesman Chris Stockton told NGI’s Shale Daily.

And Tennessee Gas Pipeline (TGP), a Kinder Morgan pipeline, is expected to place into service its Northeast Upgrade project on Friday, a spokeswoman confirmed while declining to provide any details. The project, which FERC approved in mid-2012, will allow an additional 636,000 Dth/d of Marcellus gas to be transported along Tennessee Gas Pipeline’s (TGP) 300 Line to an interconnect with Algonquin Gas Transmission in Mahwah to serve the Northeast (see Shale Daily, Sept. 26). TGP’s project includes five 30-inch diameter pipeline loops and modifications to four existing compression stations.

Earlier this month TGP received approval to place into service the remaining facilities of its MPP Project in Pennsylvania, which would provide producers with an additional 240,000 Dth/d of takeaway capacity to transport gas to Northeast markets (see Daily GPI, Oct. 22). MPP complements Northeast Upgrade and consists of about eight miles of 30-inch diameter pipeline looping and modifications to four compressor stations in Pennsylvania.

The projects entering service now and in the near future are mainly focused on moving gas to the New York/New Jersey and Mid-Atlantic regions and will have “limited benefit” for end-users in New England, which is likely to continue to see price spikes during peak winter demand periods, the Energy Information Administration (EIA) said Wednesday.

Expansions with expected in-service dates between 2013 and 2015 would add at least 3.5 Bcf/d of capacity to New York/New Jersey and Mid-Atlantic markets, by EIA’s tally. More than 2 Bcf/d of expansions are expected this winter alone.

The largest of the projects coming online between now and the end of the year is the Texas Eastern Transmission (Tetco) NJ-NY Expansion from Linden, NJ, to Manhattan in New York City, according to EIA. The project is slated to provide an additional 800 MMcf/d of capacity into the New Jersey-New York region, with 730,000 Dth/d able to be sourced from receipt points on Algonquin’s system near Ramapo, NY, and Mahwah, NJ. In addition, up to 100,000 Dth/d could be sourced from a receipt point on Tetco’s system in Lambertville, NJ. The 15.2-mile, 30-inch diameter pipeline will extend from Staten Island, NY, through the cities of Bayonne and Hoboken in New Jersey, and terminate at a new interconnection in lower Manhattan.

New England consumers likely won’t see much benefit from pipeline expansions until 2016, EIA said. Algonquin Gas Transmission, which takes gas from the Marcellus and elsewhere to consumers in New England, has traditionally operated near its full capacity during peak winter periods. The next planned expansion is the Algonquin Incremental Market (AIM) project, which would enable the pipeline to flow north an additional 0.42 Bcf/d received at an interconnect with Millennium Pipeline in Ramapo, NY (see Shale Daily, July 10). The target in-service date for the AIM Project is Nov. 1, 2016.

During the coldest portions of last winter, Algonquin Citygate prices hit the teens and twenties several times, hitting a high of $34.59/MMBtu on Jan. 24, 2012, while Transco Zone 6, although tamer overall, went to $37.07/MMBtu on the same day, according to NGI’s Daily Gas Price Index. This compares with prices at the Chicago Citygate, Henry Hub and TGP Marcellus, which mainly clung together throughout the winter at around $3.00-4.00/MMBtu (see chart).

Monthly forward prices for gas purchased at Algonquin continue to spike during the winter compared to Henry Hub. By contrast, the forward price at the Transco Zone 6-New York hub is similar to the Henry Hub forward price, EIA said.