August natural gas bidweek prices saw stout gains across the board except for a handful of Marcellus Shale trading points as NGI‘s National Spot Gas Average came in 28 cents higher than the previous month at $3.00/MMBtu, according to Natural Gas Intelligence (NGI), which has unveiled a number of new market pricing locations with its latest monthly price survey. 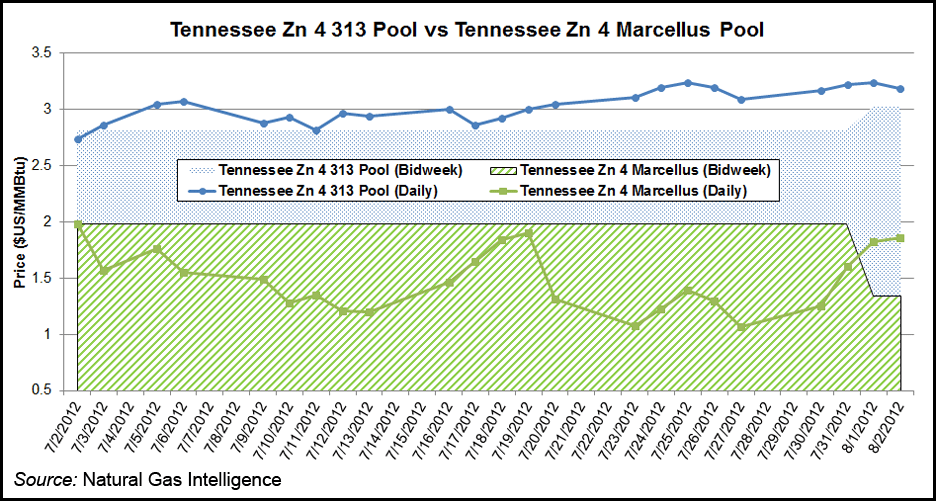 The largest gains in bidweek prices — traded at roughly 100 locations across North American and contracted to flow for the entire month of August — over the July bidweek were posted in the Midcontinent, up 37 cents to average $2.99/MMBtu, the Rocky Mountains, up 33 cents to $2.79, and the Midwest, up 33 cents to $3.13.

Due to infrastructure constraints in the Marcellus Shale, which often push prices lower as gas supplies bottleneck in the region, the Northeast reported the smallest regional gain of 13 cents to average $2.97 as a few points in the region recorded this month’s only losses. Tennessee Zn 4 Marcellus notched the lowest price for the month, plummeting 65 cents to an average price of $1.34, less than half of the National Spot Gas Average.

Another region showing a slimmer gain was California, which was up 21 cents to $3.04. East Texas, South Texas and South Louisiana all came in within pennies of the national average gain. Natural gas futures traders were largely in synch with the physical market as the August futures contract expired Friday (July 27) at $3.01, spot on NGI‘s Henry Hub bidweek posting of $3.01 and just a penny higher than NGI‘s National Average.

NGI‘s National Spot Gas Average for August was $1.36 lower than August a year ago. And despite the gains over July, traders, eyeing the ominous storage overhang, were not optimistic that prices would hold the current relatively lofty levels for long. Some are thinking prices will fall sharply before the end of injection season if the storage caverns are topped off and production has no place to go.

“We have had so much supply come online that we don’t know what will happen come September and October. I am looking for sub $2,” said a Midcontinent marketer. “Some pipelines are getting constrained; volumes are getting cut, and this is a sign of things to come. Southern Star, and to some extent Panhandle, are having problems, and gas has to be renominated.

“The problem is that storage is so full that people have to re-balance. We are having issues that are coming to haunt us. A broker called the other day and was asking what was going on, and I told him I was scratching my head. Whenever I scratch my head, it seems like a time to sell,” he said.

As bidweek trading and marketing gets more complex and moving gas out of constrained areas such as Marcellus Zone 4 becomes more challenging, new price indices introduced by NGI may be able to help.

“Shale gas continues to flood into the market and is changing the supply-demand dynamics in the United States,” said NGI Director of Strategy and Research Patrick Rau. “NGI has kept pace with those changes by introducing new spot price locations and revising some existing spot price indexes. NGI has introduced nine new pricing points with six of the nine focused on the Marcellus Shale.”

NGI has a new spot price for the Millennium East Pool in New York, two pricing points in Texas Eastern’s M2 Zone, which runs from the Kentucky Tennessee border to southeast Pennsylvania, and a new Transco Leidy Line index.

NGI has also introduced a 313 Pool index and a Tennessee Zone 4 Marcellus index, which traders are applauding because it helps delineate pricing for gas that is currently constrained because of pipeline bottlenecks in the prolific Marcellus Shale.

“The indexes can break the Marcellus down to where the restrictions are,” said an eastern marketer. “If you have gas between compressor stations 315 and 321, that would trade as typical Marcellus production. If you had production at station 317 or 319 and transport on Tennessee west to Station 315, then you could benefit from new pricing points, which are dominated by the higher-priced gas coming in from the west such as Dominion, Clarington and REX.”

To accommodate shale production out of the Haynesville, Barnett and Eagle Ford shales, NGI also has a new spot price at the Perryville Hub.

Expected growth in Niobrara production in the Rocky Mountains, as well as Wattenburg production in the Denver-Julesburg Basin, prompted a new CIG-DJ Basin index, and NGI has constructed a new spot price index — St. Clair — to handle deals done from TransCanada into MichCon.

To learn more about the new additions to NGI‘s indices, visit https://intelligencepress.com/newpoints to view a video methodology.