The Marcellus Shale Coalition (MSC) should announce a new CEO by the middle of the month, according to the industry group’s chairman. 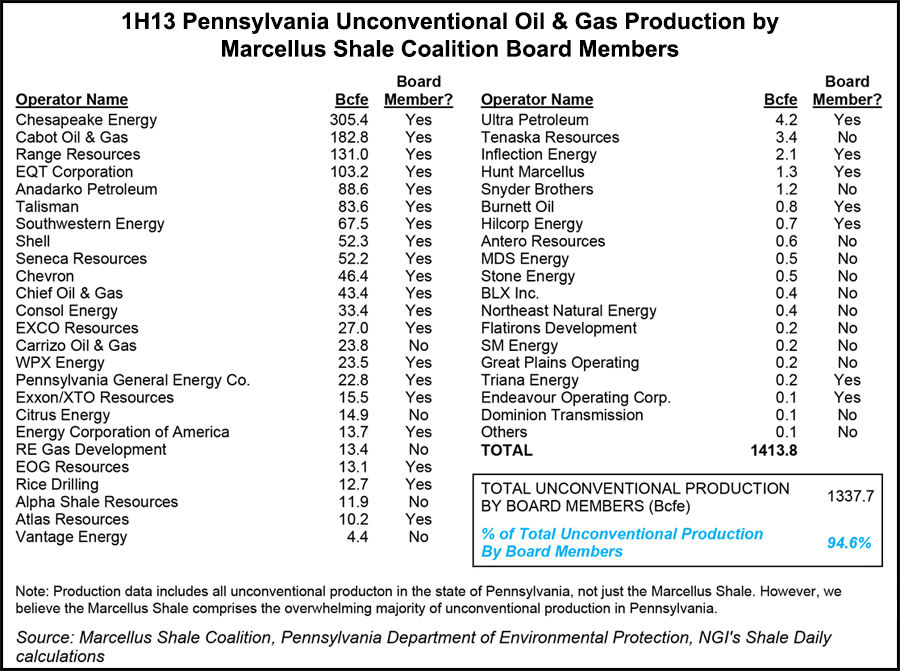 Consol Energy Inc. COO Randy Albert, who was elected chair of the MSC in August, said the board is to meet on Oct. 16, and by then or soon thereafter a successor to Kathryn Klaber should be named.

Klaber, who has run the MSC since its formation in 2008, announced in July that she would step down (seeShale Daily, July 29).

“The first thing on our plate” is to find as talented a leader as Klaber has been to run the organization, Albert told NGI’s Shale Daily. “All of our attention is on her successor.”

Klaber, who he said had done a “superb job” for the organization, agreed to remain until a new boss was in place. She recently helmed the MSC’s third annual Shale Insight conference in Philadelphia.

Following an “orderly transition…we recognize that we need to set up the next step in our evolution and move forward,” said Albert.

The role of the MSC chief won’t change, which is to work with elected officials, regulators and stakeholders to advance Marcellus, Utica and related shale formation development. The CEO also works to enhance the region’s economy and environment.

According to Pennsylvania Department of Environmental Protection data, MSC members accounted for 95% of total unconventional oil and gas production in the state during the first half of 2013.

The Pittsburgh-based organization may be most recognized as a booster for Pennsylvania explorers, but its work is regional and it continues to look for new alliances.

“We need to get the message out. Marcellus Shale development can be and must be developed safely and in coordination with environmental rules.”

Pennsylvania-based Consol executives may be particularly in tune with what the MSC needs.

“We were the second company in 2008 to bring up a horizontal well in the Marcellus,” Albert said. “We were just behind” Chesapeake Energy Corp. in bringing the “first horizontal well online.”

Next spring the diversified energy producer, long a major coal developer, celebrates its official 100th birthday. It has access to about 4.0 Tcf of proved gas reserves, including coalbed methane and shale beds in the Marcellus, Utica and other unconventional resources. It also has close to 13,000 net producing wells.

In 2010, Consol bought the exploration and production arm of Dominion, which roughly doubled its footprint in the Marcellus.

In August Consol officials unveiled a drilling proposal with Pennsylvania’s Allegheny County Airport Authority to drill for gas at Pittsburgh International Airport, only the second airport drilling project after one at the international airport that serves Dallas/Fort Worth (see Shale Daily, Aug. 29). The partners plan to drill 47 wells into property overlying the Marcellus, with the potential to drill Upper Devonian targets.

“Our long-term view is, this is where we live,” said Albert. “We’ve been a coal producer for at least 100 years here…We know the area very well. We have a long-term view of operating in the area, and we’re pleased to be at the forefront of the Marcellus…”