In Pennsylvania lines of tubing, trucks, overturned dirt and newly-dug deep trenches along rural stretches of land are a common sight and one that’s expected to continue as the midstream buildout to carry natural gas away from Marcellus production sites is far from over. 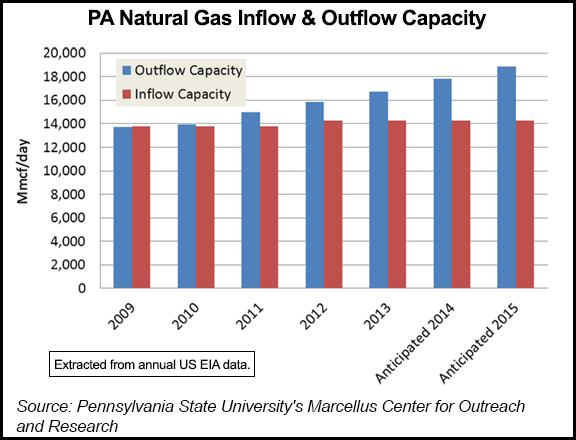 The crews laying pipe in Pennsylvania are just hitting their stride. If anything, they’ve only recently started to meet the needs of producers in the region and capacity is expected to keep growing.

Last year, according to newly released state production data, operators in Pennsylvania produced an astounding 3.3 Tcf of natural gas (see Shale Daily, Feb. 20). What’s more, that included 1.3 Tcf more natural gas in 2013 over the previous record of 2.04 Tcf in 2012 (see Shale Daily, March 6, 2013). A big part of the credit for the large leap was attributed to the number of takeaway pipeline projects that were completed during the year.

A recent analysis of U.S. Energy Information Administration data by analysts at Pennsylvania State University’s Marcellus Center for Outreach and Research (MCOR) showed that in the last decade midstream investments in the Northeast went from 15% to 88% of the nation’s total pipeline spending. In 2013, Northeast capacity investment’s totaled $2.4 billion.

By the MCOR’s calculations, the region is expected to see continued investment of nearly $1 billion per year from 2014-2016 on midstream construction and expansion. MCOR predicts production could reach 4.5 Tcf in Pennsylvania next year and it also found that outflow capacity in the state will likely grow at a sustained rate of 1 Bcf/d for the next two years.

Most of the capacity additions from 2011-2013 increased natural gas flows to traditional markets in the Mid-Atlantic. Others, slated for this year and next, will supply some underserved markets in New England.

Marcellus production growth is continuing and the Northeast is expected to become a low-cost supplier by 2020. In the meantime, basis differentials are expected to be volatile, and many analysts don’t expect that trend to abate until the region’s oversupplied market is balanced with adequate takeaway capacity.

The focus is steadily shifting to markets in southern Pennsylvania, where Philadelphia refineries provide a low-cost outlet to overseas markets and underserved consumers that still rely on oil and liquid products (see Shale Daily, Jan. 29).

It’s not just northern and overseas markets. Growing demand in the southeastern part of the country and a need for more of the Northeast’s abundant gas in the Midwest have operators plotting new courses for pipelines (see Shale Daily, Jan. 30).

A closer look at Pennsylvania’s outflow capacity shows that it has been growing at between 0.8-0.9 Bcf during the last three years, according to the MCOR.

Widening basis differentials in the Northeast have recently forced some operators, such as Carrizo Oil & Gas Inc. and Cabot Oil and Gas Corp. (see Shale Daily, Feb. 21; Feb. 25😉 to curb their drilling programs and complete a backlog of wells.

Yet, the very same companies, along with the likes of Range Resources Corp., EQT Corp., Rex Energy Inc. and others, have to varying degrees witnessed record natural gas production and a significant boost in reserves and earnings as a result of their Marcellus programs.

At the same time, finding and development costs have fallen to produce some of the best returns in any domestic oil and gas play.