In a wide-ranging analysis of 1H2014 state production data, the Pennsylvania State University Marcellus Center for Outreach and Research (MCOR) demonstrated how unconventional operators are only just beginning to hit their stride in the nation’s largest natural gas producing formation. 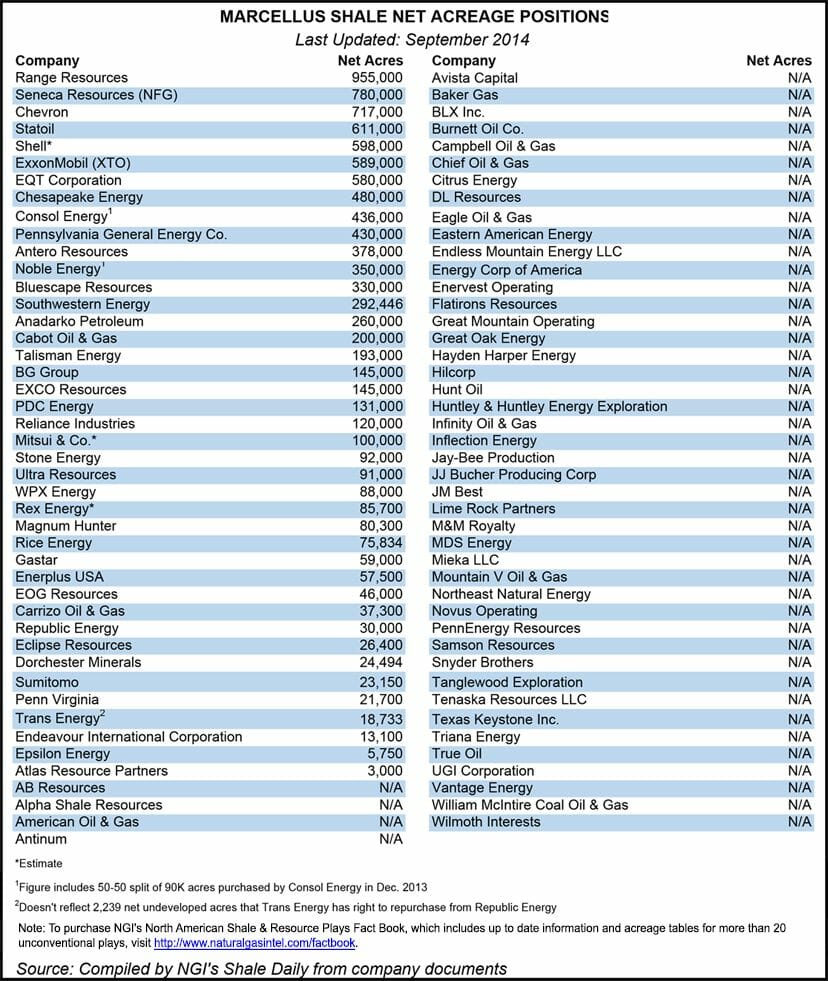 In its latest analysis of the raw production data operators submit to the state Department of Environmental Protection (DEP) on a six-month basis, MCOR found that both the number of active wells and those reporting production in Pennsylvania’s Marcellus Shale have increased markedly since 2011, when development began to gain serious traction. The DEP listed 7,706 active wells in the first half of this year, up from 4,312 active wells during the same time in 2011. More importantly, 5,405 of those wells reported production, compared to just 1,646 wells in 1H2011.

That’s a drop in the bucket in comparison to some projections that estimate anywhere from 100,000 to 150,000 horizontal Marcellus Shale wells could be drilled over the course of the play’s life, said MCOR Shale Gas Asset Manager Matt Henderson, who led a webinar on Thursday to discuss the center’s analysis with the public.

Even in the first half of last year, there were 6,261 active wells, of which 4,217 reported production, Henderson said. This year, many had only started drilling by the time production reports were due (849), while 548 were shut-in, and others were plugged, classified as regulatory inactive or as observatory wells. Based on those calculations, and after a closer look at the data, Henderson said there were about 2,301 Marcellus wells offline at the end of June.

“Looking at that, if we see how many wells could be put online today and flow gas to the market out there, it probably shows about another 1,300 wells that are waiting on the pipeline to be built to the pad, pipeline capacity from the transmission line or waiting on gas lines and compression units to get in place,” he said. “So there’s another large inventory of wells out there that can be put online. As we see what we’re producing at 1.9 Tcf, with about 5,000 wells, you can also see this would add a significant uptick to production over time.”

Predominantly a gas formation, operators in Pennsylvania produced 1.8 million bbl of condensate during the coverage period, nearly all in southwest Pennsylvania’s Washington County. Most surprisingly, Range Resources Corp. accounted for 1.7 million bbl of that total, or roughly 95%. Just 209,015 bbl of oil were reported from 19 Marcellus and Utica wells in Washington and Mercer counties.

Oil production, however, is expected to steadily increase as more operators target the Utica Shale in Pennsylvania, Henderson said (see Shale Daily, March 26). During the first six months of the year, 28 horizontal Utica Shale wells were active in the state, up from 17 last year. Those wells reported 7.2 MMcf of natural gas, 18,336 bbl of condensate and 4,695 bbl of oil.

Royal Dutch Shell plc affiliate SWEPI LP accounted for a large portion, listing 2.9 MMcf of the Utica natural gas production. The company appears to be stepping up its Utica exploration efforts in the state, announcing results from two Utica wells in north-central Pennsylvania earlier this month, one of which had observed peak flow rates of 26.5 MMcf/d (see Shale Daily, Sept. 3).

Activity in the Upper Devonian shales is also slowly increasing. Operators reported 38 wells drilled into those formations, which produced 11.6 MMcf of natural gas and 14,470 bbl of condensate. Last year, MCOR said there was little data available about Upper Devonian production.

In 2013, Pennsylvania became the second largest gas producing state in the nation behind Texas (see Shale Daily, Feb. 20). The same was true from January to June, with Pennsylvania’s volumes second to Texas, which produced about 3.8 Tcf during the same time.

By comparison, Henderson said there were roughly 500 wells in the Barnett Shale of Texas that were producing more than 2 Bcf of natural gas over a six month period during that formation’s peak.

Thanks to improving technology, more Marcellus wells are sustaining their production over longer periods of time and for now holding up against projected decline curves. There were 155 Marcellus wells that produced more than 10 MMcf/d over the six month period. Most of those belonged to Chesapeake Energy Corp., Chief Oil & Gas and Cabot Oil & Gas Corp. in the northeast part of the state.