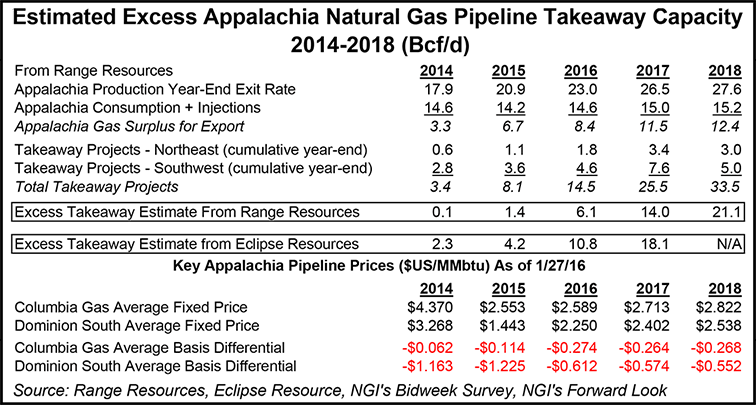 EIA noted Wednesday that the spread between Henry Hub and trading points along the Marcellus/Utica shales in Pennsylvania, West Virginia and Ohio has narrowed since mid-2015. As cold weather begins to raise demand in areas like New York and Boston, “new infrastructure projects have come online to alleviate the disconnect between prices in producing and consuming areas around the country,” government researchers said.

“Although prices in the Marcellus region are still relatively low, trading under $1.50/MMBtu, the gap between Marcellus region price points and Henry Hub has narrowed.” For example, the price at the Leidy Hub on Transcontinental Gas Pipeline (Transco) “averaged 93 cents/MMBtu below the Henry Hub price from Dec. 1 through Jan. 15. In July 2015, this differential was much larger, averaging $1.65/MMBtu for the month,” EIA said, citing NGI’s locational spot prices in its calculations.

With several pipeline expansions recently coming online and with several more in development, “the difference between Marcellus region prices and the Henry Hub price should continue to narrow,” EIA said. Independent energy analysts recently have noted much the same (see Daily GPI, Jan. 12).

As infrastructure begins to catch up to Appalachia’s chronic oversupply, observers have debated whether this will lift regional prices or dampen them at other trading points outside the basin. NGI’s Forward Look product delved into this issue in July. NGI Markets Analyst Nate Harrison in a review at the time said “forward markets, as it turns out, seem to be expecting all boats will be rising, although the Marcellus will be rising faster.”

NGI Director of Strategy and Research Patrick Rau said this week estimates from Range Resources Corp. and Eclipse Resources Corp. suggest “excess pipeline capacity out of the Appalachia could range between 21.1 and 33.5 Bcf/d by the end of 2018. Dominion South looks to be a prime benefactor of that, as forward basis differentials there are expected to shrink from minus $1.23/MMBtu in 2015 to minus 61 cents in 2017 and minus 55 cents in 2018.

“Meanwhile, basis differentials into Columbia Gas (TCO), which has provided shippers with the strongest delivered-to-pipeline prices in the Appalachia area in recent quarters, are expected to slip from minus 11 cents in 2015 to the negative 26-27 cent range in 2016-2018.”

In Northeast Pennsylvania, basis differentials moving forward will “hinge very much on the success of the proposed Constitution and Atlantic Sunrise projects, and both of those are facing strong resistance,” Rau said. Constitution Pipeline delays persist, although Williams plans to get it into service by the end of 2016 (see Shale Daily, Oct. 23, 2015). However, a 2016 in-service date is looking “less and less likely as the project awaits a final key permit” in New York.*

*CLARIFICATION: NGI has clarified that analyst Patrick Rau’s original comments concerning the Constitution Pipeline only applied to the potential for its in-service date to be delayed beyond 2016. The comments were not intended to suggest anything about the pipeline’s prospects for final regulatory approval.

Chart Industries Inc. has recently seen growing interest in technology and equipment related to small-scale liquefied natural gas (LNG) developments since the start of the year, but it expects large-scale activity to be muted this year. “From the beginning of the year until now, our small-scale pipeline has easily grown $150 million from a quoting…