Given current commodity prices, natural gas wells drilled in the Marcellus Shale — wet or dry — compete favorably with marginal Bakken Shale oil wells, but that’s the only gas play in the U.S. onshore that today can compete with Bakken oil well economics, according to an analysis by Barclays Capital. 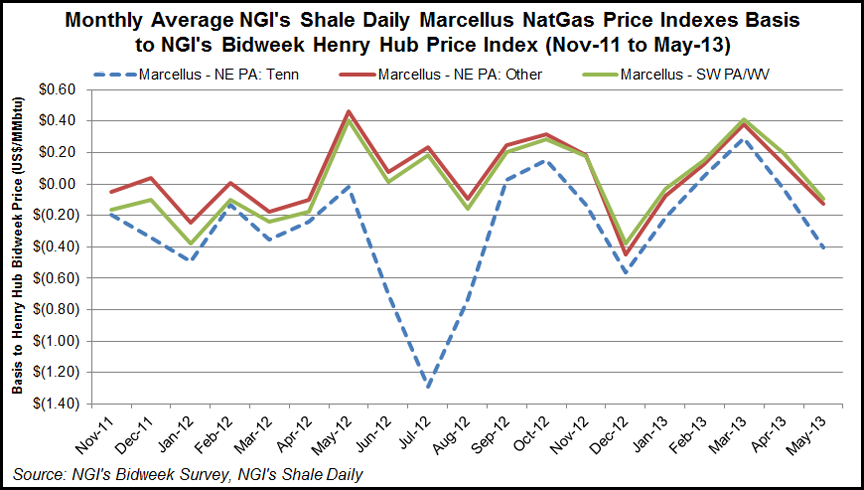 Analysts Biliana Pehlivanova and Shiyang Wang drilled down into the economics of several onshore shale plays to compare proxy gas wells in some of the biggest onshore discoveries — the Barnett, Fayetteville, Haynesville and Marcellus — with those of a marginal Bakken oil target.

Of course, no two plays and no two wells are the same, and drawing conclusions won’t be an exact science. That in mind, a range of assumptions was calculated, leaning on Barclays’ cash flow models to derive a gas price to match the economics of a proxy gas well with a proxy oil well. A uniform 10% cost of capital was assumed in each of the plays analyzed.

When the Barclays team last analyzed onshore well economics two years ago, it found that gas prices would need to more than double from the then New York Mercantile Exchange prices to compete with oil.

“Since then, oil-directed drilling has continued to grow while natural gas drilling has collapsed, oil and natural gas prices have both dropped, and drilling activity has become more efficient.” So Pehlivanova and Wang took a “fresh look” at the oil and gas price “indifference curve” to compare today’s well economics.

The proxy wet and dry gas Marcellus wells analyzed competed favorably with the proxy marginal Bakken oil well. Fayetteville and Barnett proxy gas wells didn’t measure up to the Bakken well’s economics, but “they appear marginally profitable.” Meanwhile, the gassy Haynesville’s wells are “unlikely” to be developed at current prices and “would require $5.97/MMBtu to compete with the proxy Bakken well at current oil prices.”

The “best” oil wells in the both the Bakken and Eagle Ford yielded much better returns than the proxy Bakken well, and those would be the last wells “challenged” by improving gas drilling economics, noted Pehlivanova and Wang.

“Oil prices clearly matter for gas production and drilling,” said analysts. “This is true not only for wet gas wells, which enjoy a boost to revenues compared with their dry gas siblings, but also for dry gas wells, which become relatively more attractive as revenues from oil wells fall with lower oil prices.”

For example, with West Texas Intermediate (WTI) at $80/bbl, the Barclays proxy Haynesville well “would require a gas price of only $5.14/MMBtu” to match the present value-to-interest (PV-to-I) ratio of the marginal Bakken well. “In contrast, with WTI at $110/bbl, gas prices would have to rise to $7.01/MMBtu” to match the PV-to-I ratio for the Bakken well.

“However, the largest effect perhaps comes from the difference in the types of wells used in our analysis,” said the analysts. “In early 2011, oil wells were increasingly attracting capital at the expense of marginal gas wells. Similarly, our earlier analysis used dry gas wells that were being drilled at that time — a dry gas Barnett well and an unrestricted Haynesville well — and compared them with some of the best oil targets in the Eagle Ford and Permian Basin, which were then attracting capital away from dry gas plays.