Cabot Oil & Gas Corp. exceeded the high-end of its first quarter guidance, producing 2.276 Bcfe/d, or 21% more than it did at the same time last year, as its Marcellus Shale assets in Northeast Pennsylvania continued to outperform. 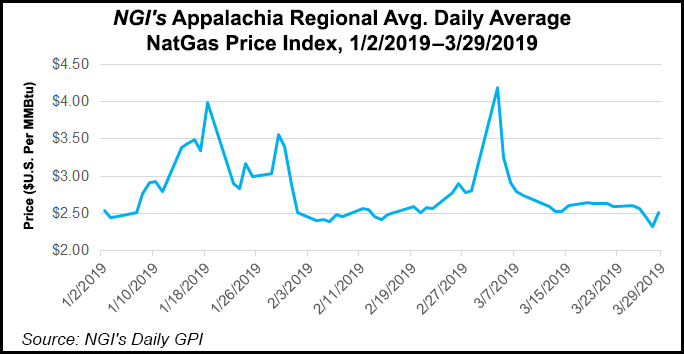 Production was also up from 4Q2018, when the company produced 2.243 Bcfe/d. The company hit the top-end of its 2.250-2.275 Bcfe/d first quarter guidance after placing 13 wells to sales during the period, when Cabot also saw the benefits of additional natural gas takeaway capacity and other local demand sources that came online late last year.

Atlantic Sunrise, which entered service last October and gave Cabot another 1 Bcf/d of capacity from its sole operating area in Susquehanna County, PA, along with new gas-fired power plants in the region, helped deliver what CEO Dan Dinges said was one of the best quarters in the company’s history. He attributed the results in part to a “marketing strategy that has allowed us to access new markets and significantly improve differentials without increasing our gathering and transportation costs.”

“Differentials were what we expected in the first quarter after Atlantic Sunrise ramped up and some other demand projects came on,” said Senior Vice President of Marketing Jeffrey Hutton during a call on Friday to discuss first quarter results. “Looking out at the second quarter in the short-term, or maybe the balance of the year, basis has widened a little bit.”

Differentials appear to be tightening throughout the Appalachian Basin as demand falls off heading into the shoulder season and other factors come into play, more evident this earnings season as leading operators in the area, such as EQT Corp. and Range Resources Corp., have reported slight declines in prices.

“We have experienced some weakness in the natural gas forward curve as weather-related demand has dissipated in April, which is expected during the spring shoulder season,” Dinges said. “However, we believe there may be upside to the current price levels driven by weather-related demand this summer, which would also coincide with the potential increase in exports to Mexico and continued strength in the demand for feedgas for” liquified natural gas export facilities.

Volumes in the basin are expected to grow at a more moderate pace this year as the pipeline buildout slows, longer-term demand ebbs and producers respond to budget-minded investors looking for better returns from publicly traded companies. That could also work to Cabot’s advantage, Dinges said.

“We are expecting a slowing of growth in the Northeast and Haynesville, which should be supportive of prices from a supply standpoint,” he added.

The company is forecasting a 2% sequential production increase for the second quarter and reiterated its plans for annual production growth of 20% this year. Cabot produced 735 Bcfe in 2018.

Despite Friday’s discussion of new takeaway capacity in the basin, management said little about a breakthrough at FERC, where commissioners intend to reconsider a decision they made last year about whether New York took too long to issue a water quality certification for the embattled Constitution Pipeline.

Cabot would have 500 MMcf/d of capacity on that project if it ever enters service. Cabot, one of the sponsors, has been battling New York regulators ever since certification was denied in 2016. The Federal Energy Regulatory Commission’s intent to reconsider its decision upholding New York’s denial has breathed new life into the project.

The company also generated $308.4 million in free cash flow (FCF) during the first quarter, again checking a box for investors that have pushed oil and gas operators for stronger returns. Cabot reiterated its commitment to returning more than 50% of FCF and announced a dividend increase for the fourth time in the last four years.