The Marcellus Shale today is the largest U.S. natural gas production region, with output of more than 7 Bcf/d, which has led to a “significant, positive” impact on early movers, but some operators continue to underperform share-wise in the play, according to IHS Inc. 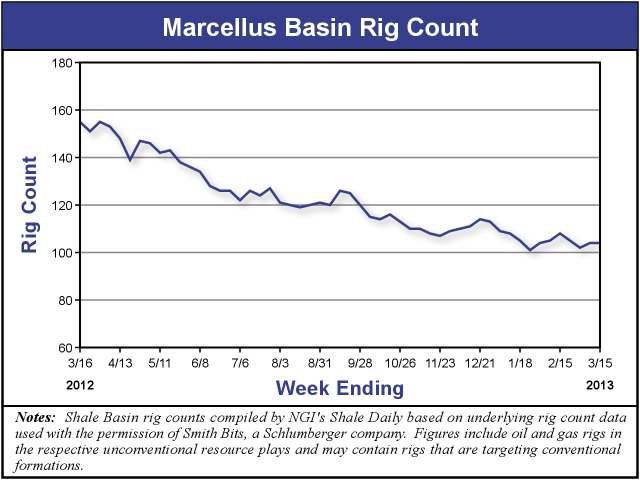 According to the new report, Marcellus output growth has had a particularly solid impact on former Barnett Shale operator Range Resources Inc., which drilled its first horizontal in the play in 2006, as well as Cabot Oil & Gas Corp. (see Shale Daily, Feb. 25a; Jan. 17).

“Both companies have dramatically improved their operational metric by investing heavily in the Marcellus over the last few years,” the report said. “Other companies, however, have yet to realize their full potential in the play,” according to the IHS Herold Marcellus Shale Company Play Analysis.

“The Marcellus has been a game-changer for early entrants Range Resources and Cabot Oil and Gas,” said IHS’ Bryan McNamara, principal energy analyst and author of the report. “These companies have created significant shareholder value through low-cost, efficient growth that has been commensurate with the explosion of production coming from the Marcellus.

“Both companies have been quick to capitalize on their significant amount of resources in the play as well results for both Range and Cabot have continually exceeded market expectations. Not all companies in this play have reached this level of performance though, and some are undervalued.”

Natural gas prices averaged $2.75/Mcf during 2012, and the number of gas-directed rigs running in the Marcellus fell by nearly one-third throughout the year to about 80 rigs, the report noted. The loss of rigs led to a considerable decline in the number of wells drilled, falling to 1,365 in 2012, or 30% fewer than the “high-water mark” set in 2011.

“Interestingly, the number of Marcellus permits issued in 2012 only fell 5% from 2011 numbers, which suggests a robust inventory of future locations remain. And despite a decrease in activity due to weak natural gas pricing, returns in the play remain relatively strong,” IHS noted.

According to NGI’s Shale Daily Unconventional Rig Count for the week ending March 15, there are 104 rigs actively drilling for oil and gas in the play, which represents a 33% reduction from the 155 rigs in operation in the Marcellus one year ago.

Even with lower activity, the Northeast unconventional play “still has more gas-directed rigs running than any other U.S. play,” with strong activity in five Pennsylvania counties: Bradford, Lycoming, Susquehanna, Tioga and Washington (see Shale Daily, March 6). “Except for Washington County, the other four counties are located in the dry gas window in the northeast section of the state.”

Range activity dominates Washington County because of the liquids-rich gas stream, said the report. “Approximately 30% of Range’s estimated ultimate recovery (EUR) of nearly 6 Bcf is in the form of liquids, resulting in even stronger returns, as Range estimates as initial rate of return of 58% under a $3.00/Mcf price scenario.”

The IHS CERA natural gas price outlook calls for an average of $3.72/MMBtu in 2013, including an average $3.98/MMBtu in the last half of this year.

“In this case, we anticipate drilling activity picking up across all five counties, given the potential for higher returns,” said McNamara. “As for Range Resources and Cabot Oil and Gas, with both companies holding nonproven Marcellus resource potential nearly five times current proved reserves, we expect continued operational success and high production growth to remain value drivers.”

Cabot, which is active in Pennsylvania’s Susquehanna County, “has seen its proved undeveloped reserves for a Marcellus well go from 4.5 Bcf in 2009 to 9 Bcf in 2012, with a few producing wells booked in excess of 20 Bcf,” noted the report. The success was attributed in part to increasing lateral lengths and more completion stages.

However, based upon the appraised net worth conducted by IHS, EOG Resources Inc., Southwestern Energy Co. and Stone Energy are currently trading at a sharp discount to both Range and Cabot, “and it appears their Marcellus positions are relatively undervalued.

Because of low natural gas prices, EOG has been “de-emphasizing” its gas investments and moving most of its capital to the Eagle Ford and Bakken shales (see Shale Daily, Feb. 15). “As a result, EOG isn’t expected to aggressively develop its Marcellus assets in the near future,” said McNamara.

“However, Southwestern and Stone have limited liquids exposure and are dedicating more capital to the Marcellus in 2013. With an estimated 1,100 drilling locations economic under a $3 price scenario, Southwestern Energy’s aggressive 2013 drilling campaign could unlock significant additional value from its Marcellus acreage position” (see Shale Daily, Feb. 25b).