Driven in part by a slowdown in Marcellus Shale activity, the U.S. rig count eased one unit lower to finish at 763 for the week ended Friday (Aug. 12), according to updated figures from oilfield services provider Baker Hughes Co. (BKR). 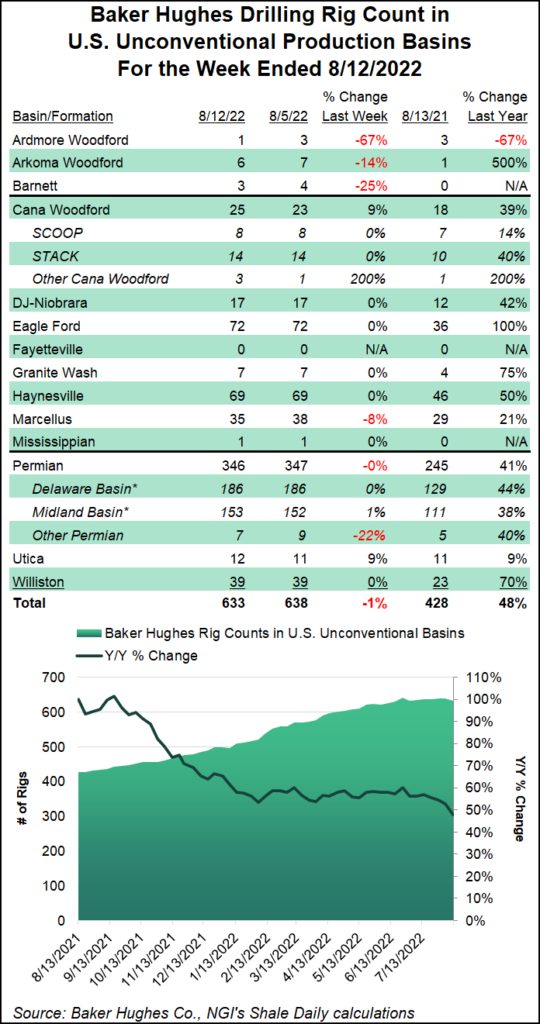 Net changes domestically for the week included a three-rig increase in oil-directed drilling. However, declines of one natural gas-directed rig and three miscellaneous units drove the overall domestic tally lower, according to the BKR numbers, which are based partly on data from Enverus. The 763 active U.S. rig count as of Friday is up from 501 rigs active in the year-earlier period.

Land drilling declined by four rigs for the week, partially offset by a two-rig increase in the Gulf of Mexico and the addition of one rig operating in inland waters. Horizontal rigs fell by five overall, while directional and vertical rigs each increased by two.

The Canadian rig count dropped two units to end the week at 201, versus 164 in the year-ago period. Net changes there included a decline of three oil-directed rigs, partially offset by a one-rig increase in natural gas-directed drilling.

Broken down by major drilling region, the Marcellus dropped three rigs from its total week/week, ending with 35 active rigs. That’s up from 29 in the year-earlier period. Elsewhere among plays, the Ardmore Woodford dropped two rigs week/week, while one-rig declines were recorded in the Arkoma Woodford, the Barnett Shale and the Permian Basin. Two rigs were added in the Cana Woodford, while the Utica Shale picked up one rig week/week, the BKR data show.

In the state-by-state count, Louisiana added two rigs for the period, while Oklahoma and West Virginia each added one. Pennsylvania saw a two-rig decrease week/week, while Alaska and Texas each dropped one from their respective totals, according to BKR.

Meanwhile, the Energy Information Administration (EIA) in its latest monthly outlook modeled global consumption of petroleum and liquid fuels of 99.4 million b/d on average for this year, with consumption of 101.5 million b/d expected for next year.