Touting growth opportunities in the refining/marketing and midstream sectors, senior executives at Marathon Petroleum Corp. (MPC) and its midstream master limited partnership, MPLX LP, on Thursday painted an optimistic outlook for the energy sector, led by the expectation that OPEC will continue to keep a tight lid on production. 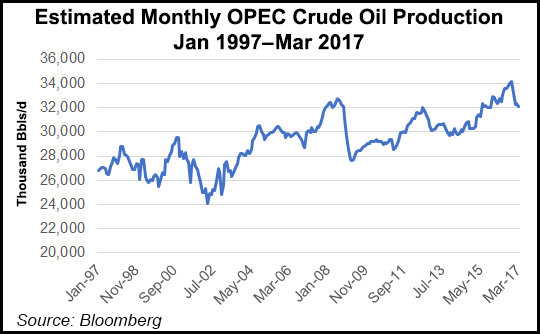 Combined with the support the industry is getting from the Trump administration, MPC CEO Gary Heminger and Mike Palmer, senior vice president for supply, distribution and planning, are expecting a more robust U.S. market for refining, midstream and crude exports.

Heminger and Palmer expect “strength and resolve” in OPEC to hold down production for the rest of the year to get much closer to supply/demand equilibrium worldwide. And U.S. producers, MPC and MPLX customers will be among the biggest beneficiaries, they said during 1Q2017 earning reports for both the corporation and MLP, both of which improved their financial results over the year-earlier quarter.

“We expect crude oil prices to end this year in the $60-65/bbl range, which is still in line with where we see markets going,” Heminger said. “It certainly appears there will be an extension of the OPEC agreement the second half of this year.” OPEC is committed to keeping the inventory imbalance in check, he said.

“I think this is going to bring worldwide inventories closer to being in balance, and this will be a big win for U.S. producers because as prices get into the $55-60 range, with the efficiencies and reduced costs that U.S. producers are seeing, it is going to be positive for the Permian, Eagle Ford and Bakken.” Ultimately, it is expected to help Marathon’s acquisition of the Ozark Pipeline.

“It looks like from a macro level we are sort of teeing up to be in the same position as last year. Gasoline inventories are pretty much what they were last year at this time. I think from a macro standpoint, the crude market is going to continue to have strong resolve in trying to get crude prices up, and that will help with differentials over the same period.

“The flywheel is going to be exports, and export demand continues to be strong.”

The second half of this year is when OPEC’s resolve to bring the market back in balance will have its greatest impact, Palmer said.

“From our standpoint…we have a lot of flexibility in our system both in terms of sweet and heavy crude, along with a lot of logistics opportunities, so I don’t think we’ll have a problem finding enough crude oil supplies to run,” Palmer said.

For 1Q2017, MPC reported earnings of $30 million (6 cents/share), compared to $1 million (less than a penny) for the first quarter last year. MPLX LP had net income of $150 million, compared with a $60 million loss for last year’s same quarter.