Houston-based Marathon Oil Corp.’s third quarter U.S. production should average toward the high end of its guidance of 230,000-240,000 boe/d net, despite the temporary impacts from Hurricane Harvey, with annual output jumping by double-digits from 2016. 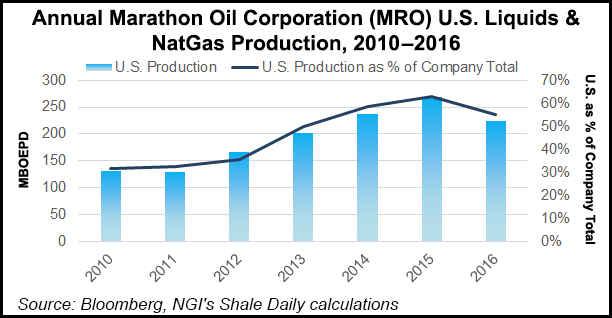 In late August, the company suspended operations and shut-in production across its entire Eagle Ford Shale position in South Texas just before the hurricane made landfall, joining many of its peers.

Marathon outperformed in the Eagle Ford, despite Harvey, unlike some of its South Texas competition, some of which are forecasting a 3Q2017 shortfall in output.

CEO Lee Tillman praised the Eagle Ford team for how it managed the business through Harvey.

“All credit to their responsiveness, collaboration and teamwork in managing the production from approximately 1,500 producing wells that we operate in South Texas,” he said.

U.S. resource plays are set to exit the year with production 23-27% higher than in the final three months of 2016.

“With consistent execution and continued stronger than expected well performance across our entire company, including the Eagle Ford, we expect to deliver third quarter production toward the high end of our guidance ranges for both U.S. and International segments,” Tillman said.

Marathon still expects its 2017 capital program to be $2.1-2.2 billion, with full-year production from the combined U.S. and international exploration and production segments, excluding Libya, of 345,000-360,000 boe/d net.

Third quarter results are scheduled to be issued on Nov. 1.