Houston-based Marathon Oil Corp. agreed Monday to pay $888 million for PayRock Energy Holdings LLC, which would give it another 61,000 net surface acres and 9,000 boe/d net production in the stacked reservoirs of Oklahoma’s Anadarko Basin. 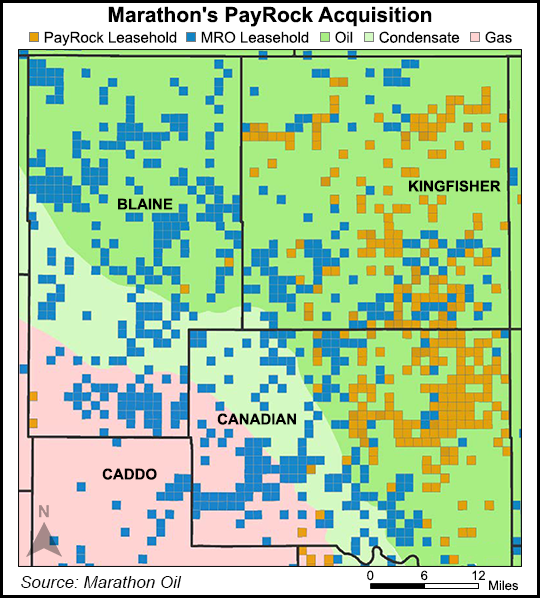 PayRock, a portfolio company of EnCap Investments, works in the basin’s touted Sooner Trend of the Anadarko Basin, mostly in Canadian and Kingfisher counties, which producers refer to as the STACK.

“The evolving STACK play is one of the best oil reservoirs in the United States,” CEO Lee Tillman said during a conference call. The purchase “meaningfully expands Marathon Oil’s existing portfolio,” and allows the producer to direct its energy to “higher margin resource plays with proven execution that are increasingly weighted to liquids.

“Put simply, PayRock ticks all the boxes for quality, scale and value, and with upside potential,” with a “multitude of investment opportunities,” Tillman said. “Acquiring PayRock’s STACK position will meaningfully expand the quality and scale of Marathon Oil’s existing portfolio in one of the best unconventional oil plays in the U.S.”

With PayRock, Marathon would add an estimated 330 million boe of 2P resource with 490 gross company-operated locations. It also would acquire an estimated 700 million boe total resource potential from increased well density in the basin’s Meramec and Woodford formations, along with future Osage development.

Regional Vice President Wade D. Hutchings, who runs the Midcontinent business, said 60% of the tacked-on acreage is operated, which “only requires 1.5 rigs to hold term.” Ninety percent of PayRock’s acreage is in the oil window, which would increase Marathon’s pro forma liquids mix.

“We’re not assuming any 2P beyond the Meramec and the Woodford,” Hutchings said. There are “multiple benches for development, but we only assumed six wells per section for the risks case.” The company expects to boost its development as oil prices strengthen, with an “increased well count in Meramec and Woodford, and expansion including Osage. Beyond that, we also see potential in Oswego and Hunton” reservoirs.

Marathon, which became an independent five years ago after spinning off its refinery operations, of late has been more of a seller than an acquirer. In April it sold a package of U.S. properties in Wyoming, Colorado, Texas and in the Gulf of Mexico for $950 million, bringing total divestitures since last year to almost $1.3 billion (see Shale Daily, April 12). However, Tillman said “simplifying” the balance sheet has “positioned us to be opportunistic to acquire what is an excellent strategic fit.”

Management isn’t revising its outlook for 2016, and asset sales remain “part of the business model,” Tillman said. The company is testing “each and every asset for fit within the portfolio.” However, there’s no doubt where incremental funds will go.

“We expect the 2016 capital program on the acquired acreage will be covered within our current $1.4 billion budget,” he said. “As we look into 2017, we would anticipate a minimum four-rig drilling program in our pro forma STACK position, which will achieve leasehold drilling requirements while accelerating delineation work.”

The “upward bias is Oklahoma,” and the STACK would receive “the first incremental dollar in capital, once pricing becomes more constructive. We look to increase the resource play once we have confidence that oil prices are sustainable above $50.”

The transaction is set to be completed by the end of September, funded with cash on hand.