Marathon Oil Corp. has shifted into heavy development mode in Oklahoma’s stacked plays, even as it touts other basins and the diversity of holdings that include prolific basins in North Dakota and Texas-New Mexico. 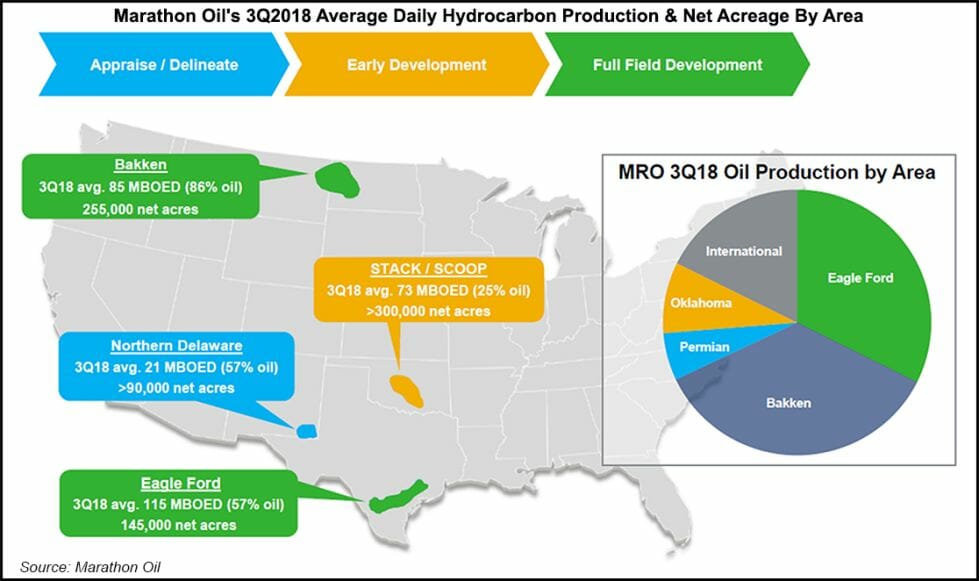 CEO Lee Tillman and other senior executives stressed some unique advantages of Marathon’s holdings in the over-pressured STACK (aka the Sooner Trend of the Anadarko Basin, mostly in Canadian and Kingfisher counties) and SCOOP (South Central Oklahoma Oil Province) plays in Oklahoma during a recent conference call with analysts.

Marathon was among the first to develop a less-than-six-wells per section approach in the STACK, said COO Mitch Little. “It looks like the industry is kind of centralizing around a similar view that we’ve been talking about,” Little said.

Tillman called the STACK and SCOOP Woodford “higher confidence development areas,” although he acknowledged that there are still areas and secondary zones in Oklahoma that need more work and understanding.

“I think what you’ll see in 2019 is a mix of both of those; and both the development pad that we’ve really started talking about this quarter, and also continuing to progress our knowledge base in other zones,” Tillman said.

While shutting the door to large-scale merger and acquisition activity, Tillman emphasized positive production numbers across several basins in 3Q2018. Eagle Ford production was up 8% in the quarter sequentially, and 10% year-to-date.

“Capital efficiency has been impressive as we are effectively doing more with less,” Tillman said. “You should expect no surprises from us in 2019 as we get prepared to release our capital budget in February,” he said.

Marathon plans to focus on the over-pressured window of the STACK, “especially the Meramec and the SCOOP Woodford,” in 2019, Tillman said. “We view those as kind of the foundational elements moving into 2019, and we would intend to hang our appraisal and delineation work around those two development areas.”