Houston-based Marathon Oil Corp. held its natural gas and oil production levels relatively steady during the second quarter, a trend it plans to continue, as it prioritizes financial stability over capitalizing on lofty commodity prices.

CEO Lee Tillman told investors during a 2Q2022 conference call the exploration and production (E&P) company was focused on remaining a strong investment grade company, whether gas and oil prices are high or “much lower than they are today… 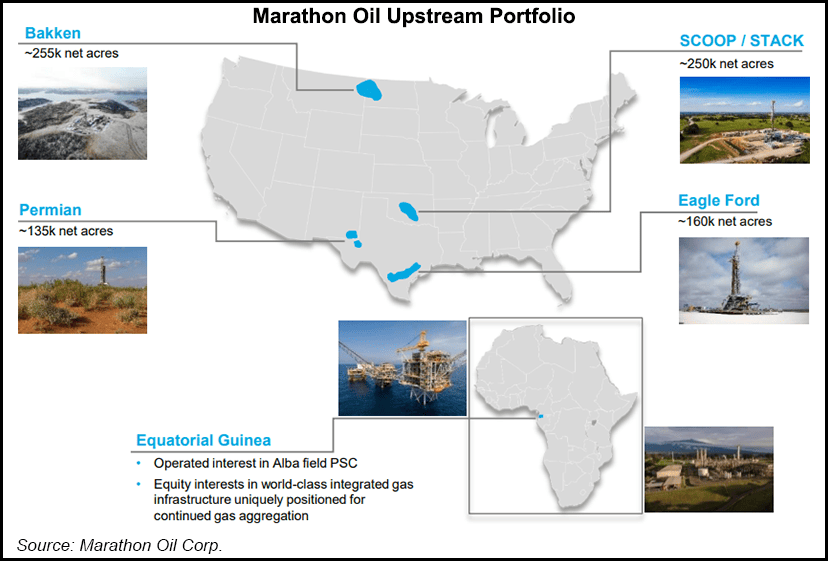 “Despite ongoing macro and equity market volatility, we remain well positioned to continue delivering financial results that compete with the best companies in the S&P 500,” Tillman said.

Marathon’s strategy, he said, was “more S&P, less E&P,” referring to the industry trend to advance buyback and dividend programs over investments.

In the United States, Marathon operates primarily in the Eagle Ford and Bakken shales, in Oklahoma and the Permian Basin. Oklahoma operations target the South Central Oklahoma Oil Province (SCOOP) and the Sooner Trend of the Anadarko Basin, mostly in Canadian and Kingfisher counties (STACK). The Permian unit works in the northern Delaware sub-basin.

Marathon brought online 49 gross operated wells during the second quarter, comprising 19 in the Eagle Ford, 20 in the Bakken and 10 in Oklahoma.

During the call management addressed the implications of the proposed Inflation Reduction Act poised to be taken up in the Senate. While containing some regulatory concessions for the natural gas and oil industry, the bill also targets a roughly 40% reduction in greenhouse gas emissions by 2030 and a 15% corporate minimum tax rate for about 200 of the largest corporations currently paying a lower rate.

Tillman called the legislation “poorly conceived” with the potential to add “costs and complexity” to the oil and gas industry that would ultimately “be passed on to the U.S. consumer and negatively, I think, impact future investment.

“There still remains a high degree of uncertainty around the proposal, but –bottom line is– we don’t need legislation to incentivize us to reduce our methane footprint. We’re already doing exactly that,” Tillman said.

About $2.5 billion in stock and dividends has been repurchased since last October.