Houston-based Marathon Oil Corp., which works in the Bakken Shale, Oklahoma and the Permian Basin, has paused all completion activities and is shutting in some production as it joins the legions of operators at war with low demand and prices. 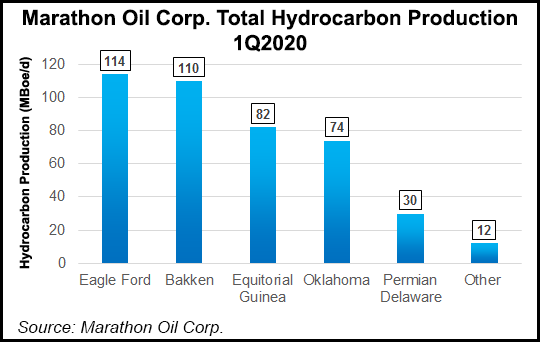 CEO Lee Tillman discussed the strategy for the super independent as he unveiled first quarter results.

“While the safety and health of our people remains my top priority, we continue to focus on the financial strength of our company,” he said. “We entered this unprecedented downturn on firm financial footing, and we believe we are taking the necessary steps to protect our hard-earned financial strength and flexibility,” Tillman said.

Marathon has slashed $1.1 billion from the 2020 capital expenditures and now expects to reduce cash costs by another $350 million. Spending this year is set at $1.3 billion or less, half of what it spent in 2019.

Tillman, corporate officers and the board all are taking compensation reductions, while the dividend and share repurchases are deferred.

In addition, the U.S. employee and contractor workforce has been cut back, with 16% of the U.S. workforce losing their jobs and the contractor base decimated by 70%.

“Such reductions reflect a realignment of company resources with lower investment levels, while retaining a foundation of essential talent to support an efficient recovery in investment,” management said.

Like many other exploration and production companies, first quarter numbers ended solidly, but it was mostly from gains in the first two months.

However, in response to the dramatic fall in commodity prices in early March, Marathon has exercised “the flexibility inherent” in its resources program and “suspended further activity, beyond wells already in progress” within the Permian Basin’s Delaware formation.

“In light of the substantial change to global commodity prices and the macro environment, the company has withdrawn previously provided guidance.”

Marathon now expects 2Q2020 U.S. production “will be down sequentially due to curtailments along with natural decline from reduced activity. The company will continue to assess the need for curtailments on an ongoing basis in response to market conditions.”

It was the same story In the Eagle Ford, where Marathon operated four rigs and two fracture crews between January and March. Total production averaged 114,000 boe/d and oil output was 72,000 b/d. Thirty-eight wells were turned to sales.

For now, however, second quarter completions have been suspended in the Eagle Ford and plans are “to transition to a lower and more stable level of drilling and completion activity over the second half of the year.”

Within the Bakken, output also was strong in the first three months at 110,000 boe/d net on average, with oil production of 88,000 b/d. Four rigs and one fracture crew were working with 25 wells turned to production. As in the other Lower 48 plays, completions are done for now, with the outlook hazy through the rest of the year.

Oklahoma production averaged 74,000 boe/d net in 1Q2020, with oil at 21,000 b/d. Three rigs and one fracture crew were in operation at the start of the year, and 13 operated wells were turned to sales through the quarter. However, all drilling and completion operations were suspended before the end of March and Marathon “currently does not expect to bring any additional wells to sales in Oklahoma this year.”

First quarter net losses were $46 million (minus 6 cents/share), compared with profits in the year-ago period of $174 million (21 cents).

Total liquidity at the end of March was $3.8 billion, which consisted of $800 million in cash and a revolving credit facility of $3 billion. As of early May, Marathon has 2Q2020 open crude hedge positions that include 117,000 b/d of fixed price swaps and two-way collars at a weighted average floor price of $30.33/bbl. The company said it has also added hedges to protect near-term regional basis differentials and New York Mercantile Exchange trade roll exposure.