Marathon Oil Corp. continued to raise its game in the Eagle Ford Shale during the third quarter, improving drilling times by 20% from a year ago and bringing drilling and completion costs down by 20%. The company still plans to exit the year with net production of about 100,000 boe/d from the South Texas play. 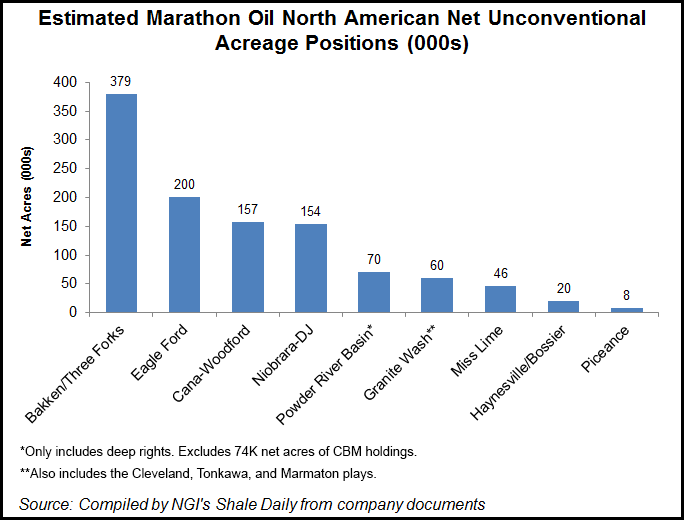 Tillman was asked during a conference call Tuesday about the production split from the Eagle Ford going forward and whether/how much it might change.

“That’s a moving target as the mix of wells changes as we move from the condensate window to the high GOR [gas-to-oil ratio] oil window, those proportions can change, but you know the zip code that we’re in, which is something on the order of 70% or greater of liquids, that’s our current target and we would like to stay in the liquids-prone area of the play just because those in fact are our best and highest return wells,” Tillman said.

In the Eagle Ford, the company reached total depth on 70 gross company-operated wells and brought 71 gross operated wells to sales, compared to 82 and 79 gross wells, respectively in the second quarter. Average time to drill an Eagle Ford well, spud-to-total depth, averaged 12 days in the third quarter.

Meanwhile in the Bakken Shale, the company averaged 38,000 net boe/d of production during the third quarter, essentially flat compared to the previous quarter due to the temporary shut-in of producing wells while completing adjacent new wells. The company reached total depth on 21 gross wells and brought the same number of wells to sales during the third quarter, compared to 22 and 13 gross wells, respectively, in the second quarter. Average time to drill a Bakken well improved by 20% compared to the year-ago quarter, averaging 14 days spud-to-total depth in the third quarter. Bakken production averages 90% crude oil, 4% NGLs and 6% natural gas.

Oklahoma unconventional production averaged 15,000 net boe/d, an increase of 15% compared to the previous quarter, with liquids volumes growing about 40%. The company reached total depth on three gross wells and brought two gross wells to sales. Marathon Oil spud two wells in the Central Oklahoma Mississippi Lime in early October and expects to spud wells in the Granite Wash by year-end.

North America E&P production available for sale averaged 200,000 net boe/d in the third quarter, relatively flat compared to the second quarter due to natural production declines in base assets partly offset by growth from resource plays, the company said. The North America E&P segment reported income of $242 million in the third quarter, compared to $221 million in the second quarter of 2013 and $107 million in the year-ago quarter. The sequential increase was primarily due to higher liquid hydrocarbon realizations and lower exploration expenses, partially offset by a realized loss on crude oil derivatives.