Marathon Oil Corp. is selling all of its interest in 98,409 gross acres (96,738 net) in nine tracts in Karnes, Northern Bee and Wilson counties, TX, in the Eagle Ford Shale. However, the play remains a core focus of the company. 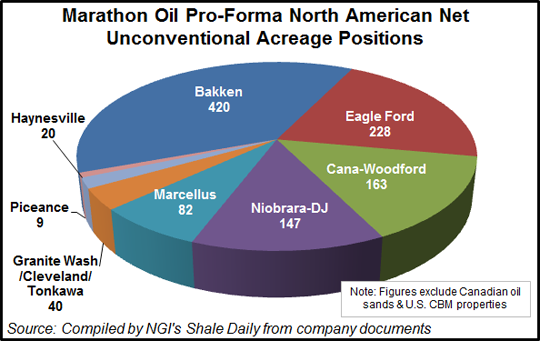 Bids will be accepted on all or part of the lots and are due by Oct. 25. The Oil & Gas Asset Clearinghouse is marketing the acreage.

“The marketing effort is part of our normal efforts to high-grade our acreage and focus on the core,” a company spokesperson said. “The acreage being marketed is not part of the approximately 200,000 net acres within our holdings that we consider the core of the play.”

“Longer term, as we continue to execute our strategy, we estimate our net production from the Eagle Ford will be approximately 120,000 boe/d by 2016. No question, this asset is a priority for us, and our investment reflects that. Over the next five years, we plan to spend approximately $1.6 billion annually to grow this asset. That amounts to nearly one-third of our expected overall capex spend.”

Earlier this year Marathon said it had dropped some rigs in the Eagle Ford due to increased drilling efficiencies there. At the time the company had 20 rigs and four dedicated hydraulic fracturing crews running in the play. However, Marathon said it had “realized significant efficiencies in drilling, with July spud to spud rig time averaging 23 days.” Because of the efficiency gains, the rig count in the South Texas play is to be cut by two to 18 for the rest of 2012 (see Shale Daily, Aug. 2).