Marathon Oil Corp. shares were up slightly on Friday on the company’s preview of its fourth quarter and full year 2004 financial and operating results. Marathon reported that its estimated oil and natural gas production for the quarter will total 328,000 boe/d, slightly above previous guidance of 325,000 boe/d.

The company also said that its net reserve additions for the year will be 215 million boe, significantly more than the 120 million boe of production during 2004. Capital and exploration costs related to the reserve additions are expected to be in-line with previous guidance. Meanwhile, commodity price realizations also were up sharply.

Much higher gas prices should help offset the lower production. Bidweek gas prices were up 54% to $7.07 while other spot prices were up 24% to $6.26. Marathon said its realized domestic gas prices in October and November averaged $5.12, which was up 31% from 4Q2003.

One of the causes of its lower production was Hurricane Ivan which forced the shut in of the Petronius production facility in the Gulf of Mexico. Prior to Ivan, Petronius was producing 25,000 boe/d net to Marathon. Petronius is not expected to resume production before the end of the first quarter, and could take longer depending on the progress of repairs to the facility.

In early December, production from Camden Hills, also in the Gulf of Mexico, was shut-in due to the shut-down of the Canyon Express gas system for repair of the methanol delivery system. Camden Hills was producing 45 MMcf/d net to Marathon. Production there also is expected to resume during the first quarter 2005.

And while crude oil and natural gas market price indicators remained strong during the first two months of the quarter, actual price realizations were negatively impacted by widening differentials for sour crude as compared to the third quarter 2004. Without Petronius, about 80% of Marathon’s domestic oil production is sour crude.

The company estimates a non-cash mark-to-market gain of $110 million on its two long-term gas sales contracts related to Marathon’s Brae gas production. This gain is a result of the weakening of the 18-month forward gas price curve in the United Kingdom during the fourth quarter as compared to the third quarter 2004, and the annual resetting of these contracts on Oct. 1.

Marathon also said that its assets that are most likely subject to possible impairment charges, if any, are its Russian and Powder River Basin assets. The company will report its fourth quarter and year-end 2004 financial results on Jan. 27.

©Copyright 2005 Intelligence Press Inc. All rights reserved. The preceding news report may not be republished or redistributed, in whole or in part, in any form, without prior written consent of Intelligence Press, Inc. 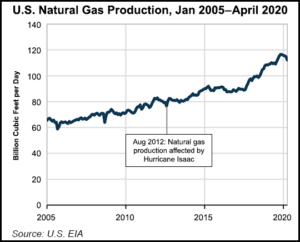 U.S. energy supplies took a hit in April that typically occurs only in times of natural disasters, with natural gas production dropping to levels not seen since Hurricane Issac ravaged the Gulf Coast in 2012, according to the Energy Information Administration (EIA). Lower 48 natural gas production fell by 2.6 Bcf/d in April, marking the…