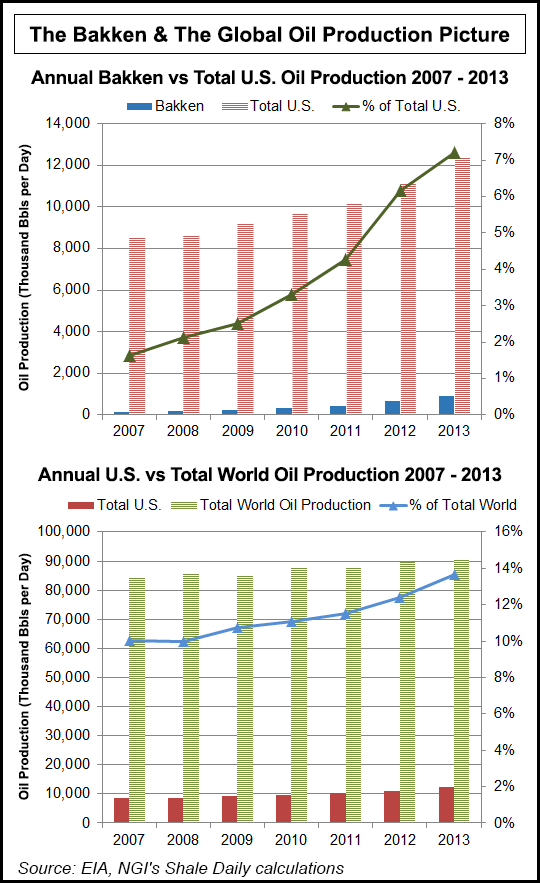 Tillman reiterated that his company is committed to continued investment in the growth of production in the Williston Basin, and that he thinks domestic crude exports would allow Bakken light sweet crude to find a global market.

Following his talk, Tillman said the industry has made the case for allowing oil exports to both the U.S. Congress and the Obama administration, in response to a question from NGI. He had called for crude exports earlier this year as a leading producer of Eagle Ford and Bakken crude supplies (see Daily GPI,Feb. 6).

He agreed that global geopolitical events, particularly those involving Russia, have increased the attractiveness of U.S. oil and liquefied natural gas (LNG) exports to political stakeholders in Washington, DC, but in terms of proposed LNG projects, the supplies cannot reach the global market quickly enough to have an impact on the immediate crisis in Ukraine. But the act of making exports possible can have some influence.

Noting that the current 15,000-20,000 b/d production increases monthly in the Bakken are “sustainable long term,” Tillman said access to the reserves in North Dakota is “critical to America’s economic growth and energy security.” He said it also could have a “profound effect” on global markets and economic growth and security worldwide. “From Europe to Asia, we are seeing a growing awareness of the need for supply diversity.”

“We [as a nation] can and should find a way to play a role in increasing that diversity by finding new ways to bring American crude oil to global markets. We are a nation built on free trade, and I am of the very strong belief the U.S. is well positioned to compete in the global market.” He noted that last year the United States was a net exporter of refined oil products, and the trade deficit in petroleum products dropped by more than $56 billion for the year.

“Lifting today’s crude oil export restrictions would help strengthen the U.S. economy, foster job creation, and promote the efficient development of the domestic energy sector. And doing this would have no negative impact on the U.S. [gasoline] consumers, in fact recent studies indicate that crude exports would actually lower gasoline prices at the pump.”

Tillman argued that the ban on crude exports threatens to actually dampen production levels in the United States as capacity restrictions prevent some U.S. refineries from processing the Bakken light, sweet crude. With U.S. producers allowed to sell crude on the global markets, domestic refineries could import more inexpensive but heavier crude for which they are better suited to process. “It could be a win-win for the U.S. economy.”