Bucking the trend of rising energy prices for manufacturers, a surge in domestic natural gas production from shale formations resulted in a 36% decrease in the average gas price paid by manufacturers between 2006 and 2010, according to the Energy Information Administration (EIA). 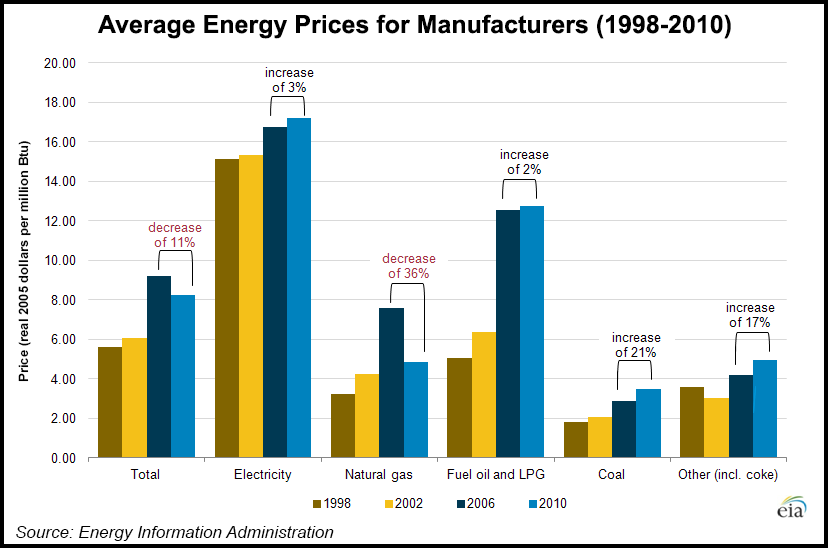 Manufacturers saw the average price they had to pay for natural gas fall from $7.59/Btu to $4.83/Btu over that five-year period, a large enough decrease that the total cost of energy from all sources fell from $9.19/million Btu to $8.22/million Btu in 2005 dollars, EIA said. And, since that data was compiled for the agency’s 2010 Manufacturing Energy Consumption Survey, natural gas prices have fallen further.

“There is anecdotal evidence that manufacturers are starting to react to lower natural gas prices by planning to open new facilities in the United States,” EIA said. “There are other influential factors, including rising employment costs overseas, but those industries for which natural gas is an important input are anticipating an advantage of locating their operations here.”

For example, one IHS Chemical executive said earlier this year that the North American natural gas revolution has made the continent one of the most attractive places on earth for petrochemical investment dollars (see Daily GPI, April 10). Most of the dollars are flowing to the United States, and specifically, the Gulf Coast region.

By 2010, manufacturers were buying about 68% of their natural gas from non-utilities, which on average was lower than the utility price in all regions, EIA said.