A manufacturers’ trade association has filed out of time to comment and intervene in the next U.S. Department of Energy (DOE) liquefied natural gas (LNG) export license case, arguing that recent export approvals show a need for “more particularized and informative standards” in evaluating applications. 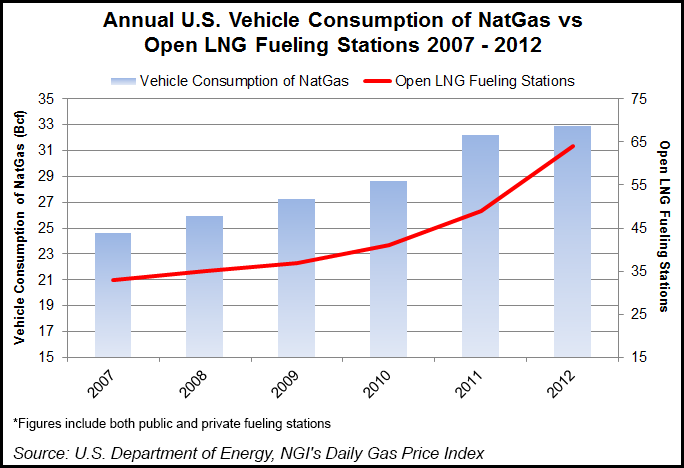 America’s Energy Advantage (AEA) said it is seeking a more formal rulemaking process based on current data and assessments of the existing supply and demand environment. With DOE’s approval last week of exports from Cove Point LNG (see Daily GPI,Sept. 12), the agency has granted its third conditional approval and its fourth overall. The pace has quickened (see Daily GPI, Sept. 13).

AEA argues that since the April 13, 2012 deadline for comments on the next export license in the DOE queue — for expansion capacity at Freeport LNG’s Quintana Island facility (FLEX) — the number of applications to export to non-free trade agreement countries has ballooned to 24, representing 32.18 Bcf/d of proposed capacity.

The trade association said it had expected that DOE would develop more particular standards for approvals following comments on the NERA Economic Consulting study the agency commissioned on LNG exports (see Daily GPI, Dec. 6, 2012). However, after the three most recent export orders it has “become apparent that AEA’s comments would be required in this [FLEX] proceeding,” it said in its motion, adding that it is not taking a position on whether the FLEX license should be granted.

In the last three export authorizations, DOE used legal standards to analyze “public interest” that were “not adequate, appropriate or sustainable,” AEA said. “In deciding to issue these orders, DOE relied on loose criteria that it adapted from guidelines promulgated for reviewing natural gasimport applications in 1984 — a time when public interest concerns relating to natural gas exports were nonexistent.

Further, AEA said, DOE’s standards for export application review “appear to be in flux.” In approving Cove Point exports, DOE said the additional volumes would exceed by a modest amount the 6 Bcf/d that NERA evaluated in its “low” exports scenario, AEA noted. “But DOE has not explained how its review will change with respect to FLEX’s application, which proposes to significantly exceed that threshold by an additional 1.4 Bcf/d, or other subsequent LNG export applications.”

While DOE has said it will monitor market conditions and what they might mean for LNG exports, AEA said that isn’t specific enough.

“Similarly, DOE has reserved the right to attach new conditions to the authorizations that it has already granted to Sabine Pass, FLEX, Lake Charles and Dominion Cove [Point], and perhaps even rescind those authorizations, but has not identified the circumstances in which it might exercise this authority and the particular standards or processes that it would apply.”

AEA also faulted the NERA study on which DOE relies, asserting that it overstates the ability of domestic supply to respond to domestic demand at stable prices, downplays the impact of price volatility on investment decisions and overstates the net positive impact of LNG exports.

The organization called for a rulemaking or similar process with public comment to establish “appropriate standards” for export application review. “Properly established, these standards could be consistently and reliably applied to all parties seeking authorization for LNG exports.”

AEA is not alone in calling for a clarified export approval methodology. In a recent paper the Brookings Institution said that both sides of the export discussion are in need of clarification of what constitutes public interest.

“There is a need to reform the existing rules pertaining to exporting LNG to non-FTA [free trade agreement] countries in order to reduce the risk and uncertainty that is hurting both producers and consumers,” Brookings said (see Daily GPI, Aug. 21).