Unconventional natural gas wells tend to take longer to reach production but they may be almost three times as responsive as conventional gas wells, almost entirely because of higher productivity, an analysis has found. 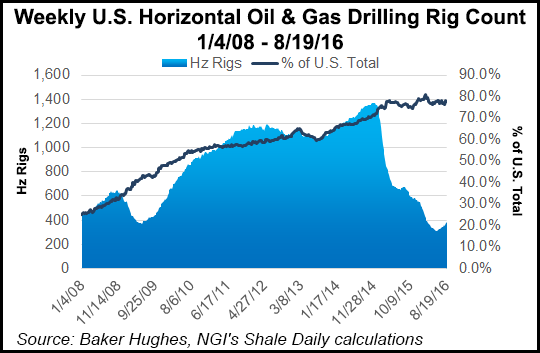 Onshore exploration and production companies long have touted the manufacturing processes used at unconventional drilling sites, where they drill multiple wells at one hub. The wisdom of using this process was analyzed by a Resources for the Future (RFF) team in a study published Monday, “Trophy Hunting vs. Manufacturing Energy: The Price-Responsiveness of Shale Gas.”

Using data supplied by, among others, the U.S. Energy Information Administration and Drillinginfo, RFF’s Richard G. Newell, Brian C. Prest of Duke University and Ashley Vissing of the University of Chicago reviewed about 62,000 gas wells in Texas that were drilled between 2000 and 2015.

“This distinction is critical in an industry where drilling rigs are a major cost factor and the total number of operating rigs is slow to change,” the researchers said. “Among other important results, this research demonstrates why simply counting wells drilled or rigs operating is no longer sufficient to gauge changes in gas supply, without also measuring heterogeneity in well productivity.”

The ” important margin” for unconventional gas wells was found to be “drilling investment” because neither production from existing wells nor completion times responded “strongly” to prices.

Because unconventional operators are using one drilling site to produce from multiple wells, the manufacturing process gives them more control and flexibility over their production levels. And to the extent that producing unconventional gas is more price responsive than traditional drilling, the shale boom likely has “flattened out” the U.S. gas supply curve, reducing price volatility, Newell and his colleagues said.

“In the words of one industry expert, conventional oil and gas investments resemble high-risk/high-reward, ‘big game trophy hunting,’ which involves drilling many dry holes in search of a few highly productive ones,” researchers said. “This stands in stark contrast to modern unconventional extraction from shale, which is commonly said to resemble a ‘manufacturing process’ in that operators have much more flexible and certain control over their production levels.”

Among other things, said the RFF study, “industry operators now have better information about the location and scale of shale resources than they do for conventional formations; the obstacle is extracting them.”