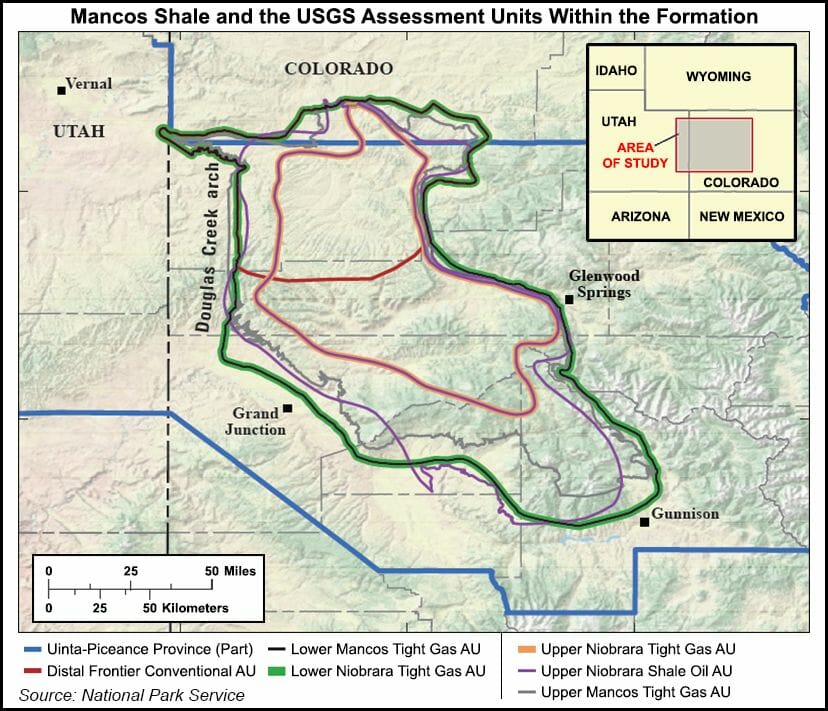 “We reassessed the Mancos Shale in the Piceance Basin as part of a broader effort to reassess priority onshore U.S. continuous oil and gas accumulations,” said USGS scientist Sarah Hawkins, lead author. “In the last decade, new drilling in the Mancos Shale provided additional geologic data and required a revision of our previous assessment of technically recoverable, undiscovered oil and gas.”

Since the previous USGS assessment 13 years ago, more than 2,000 wells have been drilled and completed in one or more intervals within the Mancos. In addition, the USGS Energy Resources Program drilled a research well in the southern Piceance Basin that provided “significant new geologic and geochemical data” that had been used to refine the 2003 assessment.

The Mancos is more than 4,000-feet thick in the Piceance and contains intervals that act as the source rock for shale gas and oil, which means that the petroleum was generated in the formation. Some of the oil and gas migrated out of the source rock and into tight reservoirs within the Mancos and into conventional reservoirs above and below the formation. Oil and gas also remained in continuous shale gas and shale oil reservoirs within the Mancos.

“Tight gas in the younger, shallower parts of the Mancos Shale is produced primarily from vertical and directional wells in which the reservoirs have been hydraulically fractured,” USGS noted. Shale oil and gas in the older and deeper intervals of the Mancos are produced mostly from horizontal wells that are fractured.

The Mancos is not the only formation that USGS has reassessed as technology and geologic understanding have advanced. In December, scientists said the Barnett Shale in Texas held almost double the amount of resources than it had estimated in 2003, with an estimated 53 Tcf of gas, 172 million bbl of oil and 176 million bbl of liquids (see Shale Daily, Dec. 17, 2015). The 2003 estimate had put Barnett resources at a mean of 26.2 Tcf of gas and 1 billion bbl of liquids. Potential oil resources were not assessed at that time.