Rapid City, SD-based Black Hills Corp. CEO David Emery on Tuesday said the Mancos Shale drilling program in the Piceance and San Juan basins is behind schedule, but the company plans to make up ground next year with 12 wells in production. Three wells should ramp up by the end of this year, he said. 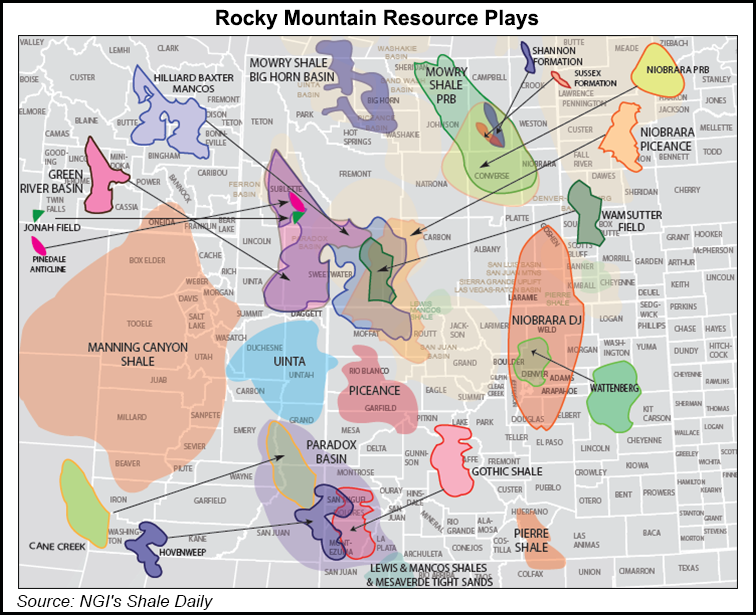 Emery discussed the exploration and production program during a third quarter conference call. He said the oil and natural gas assets offer “substantial upside for our shareholders,” and the company intends to prove up the value of all of its oil/gas properties.

“We also intend to continue to pursue disciplined exploration and production activities,” with a focus on the Mancos (see Daily GPI, Nov. 8, 2013).

“When we get through that program, we should have a reasonable understanding of the value of the Mancos property to us,” Emery said. “With those results, we’ll consider strategic options after 2015.”

The company is “a little behind schedule,” given it has only drilled, cemented and cased two of the six wells slated to be completed this year. Three of the wells now are expected to be hydraulically fractured and begin producing in the first quarter. The other three wells drilled this year are to be completed by the end of March.

Emery said this year’s delay shouldn’t have any impact on the work slated for 2015. “Our plan is to continue to drill continuously until we finish all 12 wells, he said.

Once there are 30 to 60 days of “continuous, clean production,” Black Hills plans to make public some of the operating results. “We wouldn’t be completely comfortable booking reserves yet, but we’re comfortable putting out information on initial production after 30 to 60 days.”

CFO Tony Cleberg said the company is going to lose money this year in its oil and gas operations, but “we expect to reduce that loss quite a bit in 2015.”

Production estimates call for robust growth next year, and Emery said the “Mancos Shale is going to drive a lot of it.”