The United States must boost production and exports of oil and natural gas in order to reduce Russia’s leverage in the global energy markets while continuing to pursue decarbonization, Sen. Joe Manchin (D-WV) said Thursday. 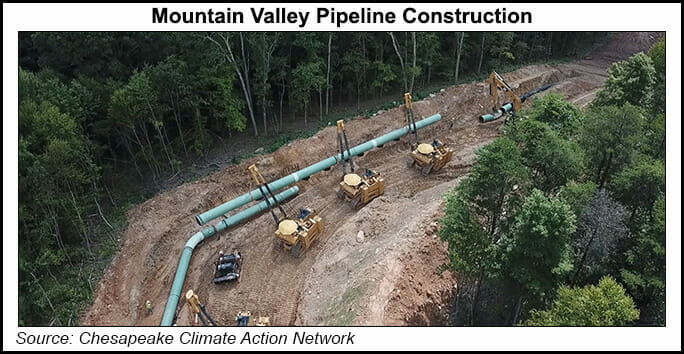 Manchin, who chairs the Senate Committee on Energy and Natural Resources, oversaw a committee hearing on “the use of energy as a tool and a weapon.” He said Russian President Vladimir Putin’s “unlawful invasion of Ukraine is the latest and most extreme example of his willingness to use European dependence on Russian energy exports as leverage to disrupt the peace and, in the process, violate international humanitarian law…It is time for us to disarm Putin and other countries who have the ability to wield energy as a weapon.”

“But now it’s time for us to hone in on how we strategically use energy as a geopolitical tool and for our national security,” Manchin said. “We must use this moment to our advantage, to rebuild our energy systems in a way that makes us less reliant on actors attempting to subvert democracy and who’d undermine or threaten our allies and partners.

‘Step Up To The Plate’

Doing so will require “both the administration and industry to step up to the plate, stop pointing fingers, take action, and just get it done,” said the senator.

He urged the president to resume oil and gas leases on federal property, which have been paused under the new administration. The Bureau of Ocean Energy Management held one offshore lease sale last November in order to comply with a court order, but the results were vacated by a subsequent ruling.

The industry “needs signals from the administration that they will support oil and gas development and production,” Manchin said. “That includes taking concrete steps, like working on a new five-year plan for the Gulf of Mexico since we know the current plan expires at the end of June.

“The administration’s failure to act on the five-year plan, combined with a failure to appeal the vacated lease sale, means that we’re almost certainly looking at no offshore lease sales until sometime next year, to say nothing about the failure to hold onshore sales.”

Manchin noted that Gulf of Mexico oil “is the heaviest we produce and our refineries are well calibrated for it.

“It makes no sense at all to me that the decision was made by Interior to not appeal a ruling throwing out the largest Gulf lease sale, particularly when that decision was made several days after Russia invaded Ukraine.”

He added, “We cannot take a short-sighted approach that pretends two years without lease sales will have no impact on our domestic oil and gas production – just because the brunt of [the] production impact from lack of leasing hasn’t hit yet doesn’t mean we can ignore” the situation.

As for the producers themselves, Manchin said, “I’m calling on industry, and the shareholders, to invest and put production before profits,” and to ramp up drilling and production from existing leases and permits “because that’s the fastest thing that we can do.”

His comments mirrored those of Energy Secretary Jennifer Granholm, who on Wednesday urged the industry to increase development because the United States was “on war footing.”

Equally important, Manchin said, is building the infrastructure needed to get oil and gas products to market. “This means pipelines and export terminals and supporting corresponding infrastructure buildout in Europe and elsewhere.”

He cited as an example the nearly complete Mountain Valley Pipeline (MVP), a 2 Bcf/d natural gas conduit out of the Appalachian Basin that has faced numerous legal and regulatory hurdles.

MVP “could be completed in four to six months if it was finally given the green light,” Manchin said, “and I’ve got legislation ready” to move it forward. Manchin also suggested the Biden administration could use the Defense Production Act to accelerate completion of MVP and other stalled energy projects.

MVP would add 2 Bcf/d of capacity “for domestic use, for export ahead of next winter, when we’ll all need it the most.’

The pipeline would “help get prices down, and it would help reduce emissions, allowing for utilities to continue to transition,” Manchin said. “And long-term, it’s a 42-inch pipe that can be sleeved and used for hydrogen in the future without building yet another pipeline.”

He added, “It’s a no-brainer to me, we just need to get out of our own way and get it done.”

Boosting U.S. production of natural gas and exports of liquefied natural gas (LNG) will help “our allies and partner nations, who don’t have the LNG hubs, pipelines and terminals they need to get natural gas to end-users without relying on Russia,” Manchin said.

‘All Of The Above’

The Democratic senator also warned against becoming overly reliant on countries such as China and Russia for nuclear fuels and critical minerals that include nickel, titanium, palladium and lithium as the energy transition progresses.

“That’s in part why I’ve been such a big advocate for hydrogen, which we can produce right here at home with” carbon capture, utilization and storage (CCUS), nuclear or renewables.

Manchin called for the State and Energy departments to “work together to establish bilateral and multilateral agreements [with] reliable countries that produce critical minerals.”

Manchin added, “Now let me close by making it clear that I am not saying to hell with our climate goals…I am a firm believer in an all-of-the-above energy mix, and that we can and should be leading the world through innovation.

“We need to get the robust funding out of the door [that] we included in the Energy Act and the Bipartisan Infrastructure Bill for research, development, and commercialization in the areas of CCUS, advanced nuclear, hydrogen, transmission, renewables, storage, advanced materials, and other energy technologies to meet our emission goals.”

Manchin said the country “must also increase the manufacturing of energy products, including wind turbines, batteries, solar panels, nuclear materials, technology” along with dual-capacity pipelines that could move natural gas and hydrogen,” along with “advanced materials and anything else that will help us and our allies.”

“Last year President Biden inherited an energy-dominant America,” Barrasso said. “He spent the last 13 months squandering it. Since day one, the president has sought to end American oil, natural gas and coal production…He’s banned new federal leases for oil and gas, he’s ground to a halt the permitting of natural gas pipelines and storage facilities, and he’s made it much more difficult for energy producers to obtain financing.”

U.S. Energy to the Rescue

She highlighted the role that GOM production and LNG exports can play in promoting global energy security, provided they have the necessary government support.

“The Gulf of Mexico is a strong example of a strategic national asset that can play a key role in the federal government’s objectives of stabilizing supply against highly disruptive scenarios like the one we are currently facing, and accelerating the transition to net-zero carbon emissions,” Hirstius said, according to a transcript of her prepared testimony. “Policies should take into account that global demand for oil has not necessarily peaked; that production from many wells, certainly those in the Gulf of Mexico, declines rapidly; that development of a deepwater project, while accelerated from historically longer time cycles, still takes a period of years from lease sale to first production.”

Therefore, she said, “future lease sales through a consistent and predictable leasing program are necessary to keep production at current levels. In this sense, stopping or delaying all federal projects and leasing is counterproductive to our shared goals of meeting current demand in the lowest-carbon ways possible – and, pertinently, in ways that improve global relations and the security of our country and our allies.”

Hirstius added that,  “We should advance the approval of backlogged LNG export permits in the United States to supply our allies, especially those in Europe.”

Also testifying was Kenneth Medlock III, senior director of the Center for Energy Studies at Rice University’s Baker Institute for Public Policy. He said that, “the abundance of U.S. energy resources will play a critical role in blunting the impacts of Russia’s use of the energy weapon in Europe in the short term, and will likely remain critical for the long term as well, even as energy systems continue their inexorable transition to a lower carbon future.”